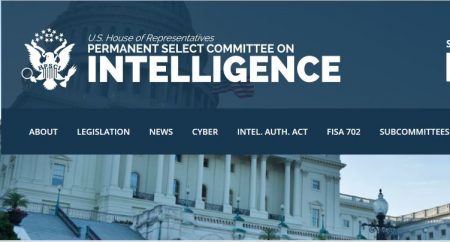 (Mar. 25, 2017) — On Friday, a public hearing which had been scheduled for Tuesday, March 28 for testimony from former Obama officials to the House Intelligence Committee was canceled.

Instead, FBI Director James Comey and NSA Director Adm. Michael Rogers have been called to appear in a private setting on Tuesday with the committee to answer questions stemming from documentation Chairman Devin Nunes reported he had viewed at a press conference on Wednesday, March 22 which appeared to confirm that Trump campaign aides’s names had been revealed after they were captured in U.S. government “surveillance.”

On Friday Fox News’s Catherine Herridge reported that Nunes wants “more answers” from Comey and Rogers before speaking with the Obama officials.  Herridge added that Clapper, Yates and Brennan may ultimately testify privately, depending on the outcome of the newly-arranged meeting with Comey and Rogers.

According to the 1978 Foreign Intelligence Surveillance Act (FISA), the names of “U.S. persons” captured in U.S. surveillance of foreigners are to be “masked” and disseminated only to a small number of those authorized to know within the U.S. intelligence community.  Surveillance under the law is conducted for “national security” purposes.

Last Monday, FBI Director James Comey and NSA Director Adm. Mike Rogers provided hours of testimony to the committee as to the protocol surrounding the unmasking of U.S. citizens in FISA communications, whether or not an investigation into alleged ties between the Trump campaign and Russia is in progress, and why Congress was not informed of it after it was commenced, as Comey uncharacteristically divulged.

Prior to that hearing, Nunes had said that while he had no information indicating that Trump’s March 4 claim that Trump Tower was “wiretapped” last fall is accurate, “The other issue though that’s still remaining out there is the unmasking of names and the leaking of names.  And so there’s a — you know, we have a lot of surveillance activities in this country and I think the concern that the Trump administration has is, you know, were they actually using surveillance activities to know what they were up to, because we know that that happened with General Flynn. We know that his name was unmasked and we know that it was leaked out to the press.”

Nunes was referring to Trump’s first national security adviser, Lt. Gen. Michael Flynn, whose name appeared in articles in The New York Times and The Washington Post depicting the substance of his telephone calls with Russian ambassador Sergey Kislyak during the presidential transition period.  While not an anomaly for transition team members to speak with foreign diplomats, the substance of at least one of Flynn’s conversations with Kislyak contradicted Flynn’s statements made to Vice President Mike Pence on the matter, causing a credibility issue.

Flynn resigned under pressure on February 13 after 24 days at his post as questions were arising over how and why  his name was released.

National security leaks continued after Trump’s inauguration as portions from apparent transcripts of his telephone calls with Mexican President Peña Nieto and Australian Prime Minister Malcolm Turnbull were made public.

Trump has pledged to find and prosecute those responsible.

The House Intelligence Committee is also probing alleged connections between former Trump campaign aides and the Russian government.  In a March 22 statement, Nunes addressed both the Russia investigation and surveillance issue.

At our open hearing on Monday, I encouraged anyone who has information about relevant topics—including surveillance on President-elect Trump or his transition team—to come forward and speak to the House Intelligence Committee.   I also said that, while there was not a physical wiretap of Trump Tower, I was concerned that other surveillance activities were used against President Trump and his associates.

·        I recently confirmed that, on numerous occasions, the Intelligence Community incidentally collected information about U.S. citizens involved in the Trump transition.

·        Details about U.S. persons associated with the incoming administration—details with little or no apparent foreign intelligence value—were widely disseminated in intelligence community reporting.

·        I have confirmed that additional names of Trump transition team members were unmasked.

·        To be clear, none of this surveillance was related to Russia or any investigation of Russian activities or of the Trump team.

The House Intelligence Committee will thoroughly investigate this surveillance and its subsequent dissemination to determine:

·        Who requested and authorized the additional unmasking

·        Whether anyone directed the intelligence community to focus on Trump associates; and

·        Whether any laws, regulations, or procedures were violated

I’ve asked the Directors of the FBI, NSA, and CIA to expeditiously comply with my March 15 letter, and to provide a full account of these surveillance activities.  I informed Speaker Ryan this morning of this new information, and I will be going to the White House this afternoon to share what I know with the President.