STATEMENT SAID TO BE BASED ON SOURCES TERMED “ACCUSATION” 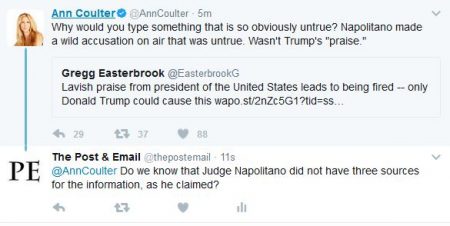 “Only Donald Trump could cause this,” Twitter user Gregg Easterbrook commented, including a link to a story in The Washington Post which said of Napolitano, “The longtime commentator and purveyor of conspiracy theories has a significant following.”

The reference to “praise” was to Trump’s having said during a joint press conference with German Chancellor Angela Merkel on Friday that it was possible that both leaders had been wiretapped by the Obama regime.

During his remarks, Trump quoted “a very talented legal mind” on “Fox News.”

Last Tuesday, Napolitano said on “Fox & Friends” that concerning Trump’s March 4 Twitter accusation that Barack Hussein Obama had “wiretapped” his office at Trump Tower during the presidential campaign, “[T]hree intelligence sources have informed Fox News that President Obama went outside the chain of command.  He didn’t use the NSA. He didn’t use the CIA. He didn’t use the FBI, and he didn’t use Department of Justice. He used GCHQ. What the heck is GCHQ? That’s the initials for the British spying agency. They have 24/7 access to the NSA database. So by simply having two people go to them saying, ‘President Obama needs transcripts of conversations involving candidate Trump, conversations involving president-elect Trump,’ he’s able to get it, and there’s no American fingerprints on this.”

Napolitano also tweeted the essence of his message at 7:56 a.m. that day.

While Trump did not name the “talented legal mind,” his press secretary, Sean Spicer, said last Thursday, “Judge Andrew Napolitano made the following statement, quote, ‘Three intelligence sources have informed Fox News that President Obama went outside the chain of command.  He didn’t use the [National Security Agency], he didn’t use the CIA…he used GCHQ.’”

Napolitano’s last Twitter entry appears as having been issued on Thursday, March 16 and contains a 3:28 video which remains active as of this writing.  The video can be viewed on Twitter and at a Fox News link from the Twitter feed.

Unlike other commentators, Napolitano believes that the President of the United States is permitted by law to order a wiretap on a U.S. citizen but that he should not exercise that power.

In the video, Napolitano repeated his statement that Obama “likely” obtained information on Trump from a “foreign intelligence service.”  “The probable culprit here is called GCHQ; that’s the ‘Government Communications Headquarters,’ roughly the British version of the CIA,” Napolitano pronounced. “Intelligence sources have told Fox News that that is the entity through which Barack Obama more likely than not went through [sic] in order to get transcripts of the conversations that Donald Trump had with his aides during the campaign and with people he was planning on appointing to office during the transition.”

On Friday, The Guardian (UK) reported that GCHQ issued a statement which said:

Recent allegations made by media commentator judge Andrew Napolitano about GCHQ being asked to conduct ‘wiretapping’ against the then president-elect are nonsense. They are utterly ridiculous and should be ignored.

The Post & Email was unable to find the statement on GCHQ’s website, including by conducting a search of the term “Napolitano.”

The Post & Email observes that Napolitano did not report that Obama “asked” GCHQ to carry out “wiretapping” on Trump.  In his video, he said that GCHQ and other “friendly” governments’ surveillance agencies have “24/7” access to data collected by the U.S. National Security Agency (NSA) and that Obama could have asked GCHQ to supply printouts of Trump’s communications.

While the media has called Napolitano’s report “unfounded,” it in fact may not be.

Coulter responded to Easterbrook’s tweet by stating that Easterbrook was “hyping something that was so obviously untrue,” in an apparent reference to his claim that Napolitano had been “fired” as a result of Trump’s “praise.”

“Napolitano made a wild accusation on air that was untrue. Wasn’t Trump’s ‘praise,'” she ended her tweet.

Coulter, an early Trump supporter, has been critical of the health care bill he is urging members of the House to pass on Thursday, calling it “Obamacare Lite” and “Ryancare,” a reference to Speaker of the House Paul Ryan.  She has been known to use sarcasm and satire in discussing political events.

The Post & Email notes that it is not difficult for a Twitter account to be compromised.  Despite that, we responded, “Do we know that Judge Napolitano did not have three sources for the information, as he claimed?”

This publication posits that if Napolitano had three sources for the information he was provided, he did not make a “wild accusation.”  We maintain that statements which accurately reflect well-sourced information and verified documentation cannot be considered “wild accusations.”

If the sources are discovered to have been incorrect, a correction or retraction can be made, including the way in which the misreporting or misunderstanding occurred.

As of press time, we have not received a response, and the tweets remain on Coulter’s timeline hours after they apparently were issued.

Observations from various professionals note some differences between a “commentator” and a “journalist.”

Although the media has worked to discredit Trump over his claim of having been surveilled, citing “no evidence,” on Sunday Dr. Jerome Corsi of Infowars began reporting that evidence gleaned from a former NSA contractor’s database shows that Trump, his ex-wife, and his children were victims of data-harvesting between 2004 and 2010.

Last Wednesday, Trump told Fox News host Tucker Carlson in an interview that “You’re going to find some very interesting items coming to the forefront over the next two weeks.”

Corsi told Jones that he has spoken with a key member of the House of Representatives and is seeking to press the White House to request the release of the NSA database which would show whether or not the former contractor’s documentation is correct.

Napolitano Surveillance Claim: Why the Rush to Judgment? added on Tuesday, March 21, 2017

3 Responses to "Napolitano Surveillance Claim: Why the Rush to Judgment?"