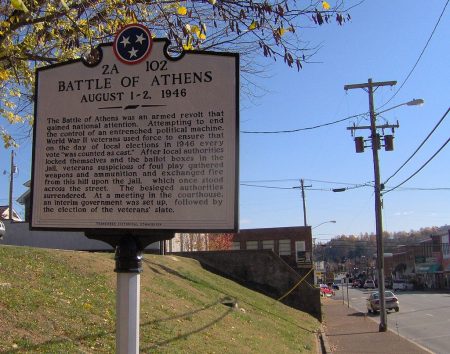 (Mar. 20, 2017) — In an interview on Sunday afternoon, LCDR Walter Francis Fitzpatrick, III (Ret.) told The Post & Email that the community of Athens, TN is exemplary of government tyranny brought about by inaction and a lack of vigilance on the part of its citizens over many years.

Fitzpatrick was imprisoned for over two years by the corrupt judiciary, grand jury and “justice” system in McMinn County, TN after approaching the grand jury in March 2014 with a request to testify as to his allegations of local government corruption.  Instead of allowing him a hearing, the grand jury issued four indictments against him as he sat on a bench outside the clerk’s office reading a book.

In June of that year, Fitzpatrick was convicted of aggravated perjury and extortion and sentenced to three years in state prison.  He was released in October following three surgeries and after developing a serious medical condition from which he is still recovering.

For more than seven years, The Post & Email has illustrated, through a number of civil and criminal cases, the cronyism and corruption within Tennessee courts which send thousands of citizens to jails and prisons each year without due process.

Tennessee law mandates that all juries consist of eligible members of the community who have been chosen by “random, automated means.”

In late 2011, then-Criminal Court Judge Amy F. Armstrong Reedy appointed Athens Federal Community Bank CEO & President Jeffrey L. Cunningham to the foremanship of the grand jury reportedly by making a personal phone call to his home in late 2010.  His successor, Larry Wallace, also chosen by Reedy, is a board member at the bank and spent an entire career in Tennessee law enforcement in various capacities.

The bank claims to support the community’s veterans.

Why a President & CEO of a federally-chartered bank would have the time in his schedule or the inclination to work for $11 a day as the county grand jury foreman has never been explained.

State law mandates that all jurors must be selected by “random, automated means.”  Judges have justified their hand-selection of the foreman by virtue of having done so for as long as anyone can remember.  The hand-picked foremen serve for as long as the judge wishes, often for years or decades.

The local media has not been willing to investigate or expose the systemic judicial corruption, including the hand-picking of the grand jury foreman.

As Fitzpatrick’s alleged accuser and star witness in the June 2014 trial, Cunningham testified that Fitzpatrick “seems to believe” what he wrote in his petitions submitted with his request to testify to the grand jury.  However, a charge of “aggravated perjury” was upheld by the trial jury, citing the statements made in the petitions.

During the trial, Cunningham denied ever having filed a criminal complaint against Fitzpatrick to advance the charges brought against him, and no police report or complaint was ever produced by the prosecution.

While still incarcerated last summer, Fitzpatrick was called upon by a state inmate from Shelby County to serve as a witness as to the composition of Tennessee grand juries but was ejected from the stand after less than five minutes of testimony by Judge Lee V. Coffee.

Compounding the illegality of its grand juries, Shelby County judges’ practice is to not only appoint the grand jury foreman, but also a “foreman pro tempore,” which is found nowhere in state law.

On Sunday, Fitzpatrick spoke of not only his own experience with a corrupt judiciary, but also the situation the nation is now seeing as evidenced by federal judges overstepping the bounds of their constitutional authority.  Fitzpatrick said that judicial overreach is a threat to the “republican form of government” the Founders set down in Article IV, Section 4 of the U.S. Constitution.

The problem with America today is that people are not prepared to stand up to fight against tyranny in their own communities.  Athens, TN is a laboratory experiment.   You want to know what’s wrong with America?  Come here to find out.

I’ve said it before:  Tennessee is where the laws go to die. That is not expressed in any stronger fashion than it’s been expressed here in Athens, TN.  If people are not prepared to stand up against tyranny in their own back yard, if they’re afraid of what might happen to them if they stand up and fight back against a corrupt government that is in plain view — judges and bankers and policemen and sheriffs — then this country is doomed.

Either put up or shut up.  Instead of having meaningless meetings, wherever they’re held, if you’re not prepared to stand up against tyranny in your own back yard as it’s expressed here in Athens, TN, there is no hope for this country.  And that’s the problem.

Everything that you want to know that’s wrong with America is found here.  I’m going around talking to people, trying to start a whisper campaign because people are afraid to stand up and fight back.  Does it take me to point out that you have two bankers back-to-back serving as the grand jury foreman and that there’s something going on with the money in that bank, not to mention the fact that you’re not allowed to hand-pick grand jury members or the foreman?  What more do you need to see? 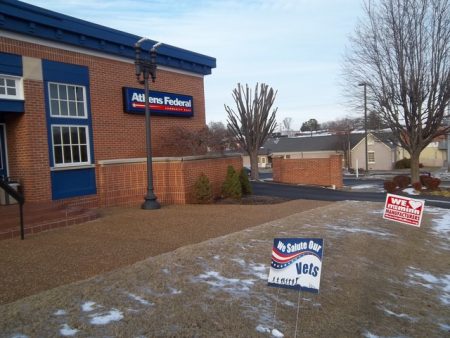 If the only crime these men committed with the judges’ assistance is that they served longer in that job than they’re allowed to by statute, that’s more than enough.  If they locked up one person as an innocent because they’ve controlled the grand jury, then that speaks volumes.  Both of these men are responsible for doing exactly that.  And their bank brags about how they treat veterans.

Can I go to a veterans’ group here in town?  Can I go anywhere in town and meet with the good people and say, “It’s time to stand up and fight back.  Will you go with me to the grand jury when I go there next?”  “Oh, no, Walt, you better be careful; look what happened to you.  Oh, no, we’re not going to do that…”

If people come together in the kinds of crowds that are willing to stand in line to hear President Trump speak in Nashville but are not willing to come with me and assist me in speaking to the grand jury, then what good are they?  They only want to do something that makes them feel good but never puts them at risk.

They think everything is going to be handed to them, that somebody else is going to fix the problem. It’s not up to President Trump; it’s our problem.

The good news is that we have a guy like President Trump in office who has our back. We know now that we can go forward with more confidence than we knew we had with a guy like Obama.

Look at the tyranny that Obama visited upon this country.  Why didn’t people stand up against him?  Well, a couple people tried; I know about that; I’m one of them.  The reason they didn’t stand up to Obama was that they knew the fix was in. They knew Obama was a criminal; they knew the kind of power he wielded, and they said, “No, I’m not going there because look what happened to Fitzpatrick.”

OK, then I will proceed as I had before.

Form and swarm.  Get together in large groups of people, take your grand juries back in your communities, and put them back to work.  Get rid of the corruption.  A grand jury can act against any of the criminal actors that you and I and others have talked about.

Talk about judicial overreach:  look at what happened here.  I haven’t found a judge here who is going to stand up to do the right thing.  It’s easy for people to say, “Oh, that’s in Hawaii; that’s not my problem.  But it’s not just in Hawaii; it’s in your back yard; it is your problem, and until you are prepared to stand up about it in large groups of people, get rid of the fear factor and take up these issues with your local grand jury, just as Keith Olbermann was doing a few weeks ago…

It’s not President Trump’s job; it’s our job:  We the People.

Fitzpatrick ended by saying that his March 17, 2009 treason complaint against Barack Hussein Obama is still active and “actionable.”

Fitzpatrick: Americans Must Take Responsibility for Corruption in their Own Communities added on Monday, March 20, 2017

4 Responses to "Fitzpatrick: Americans Must Take Responsibility for Corruption in their Own Communities"