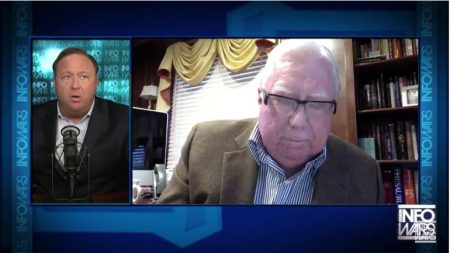 (Mar. 19, 2017) — At 4:42 in the second hour of Sunday’s Infowars radio show, Dr. Jerome Corsi described the “law enforcement” database which reportedly shows that Donald Trump and many of his business managers had their phone calls harvested by U.S. intelligence through what is being called “Operation Dragnet” or “Project Dragnet.”

Corsi said that Trump’s first wife, Ivana, and his father Fred were also “under surveillance.”

Financial records as well as electronic communications were reportedly captured on unsuspecting Americans.

Jones began the segment by showing previous articles issued by mainstream media outlets reporting surveillance activities in the U.S. to demonstrate that government spying is not a new phenomenon and has been acknowledged.

Corsi said that former Maricopa County, AZ Sheriff Joseph Arpaio and his former Cold Case Posse investigator, Mike Zullo, have been verifying the phone numbers from the database and finding them to be accurate.

Corsi said that he shared the database documentation with the White House last Tuesday and a limited number of congressmen.  He added that Zullo and Arpaio are willing to travel to Washington to brief authorities on the records they have had in their possession since 2013 and request that the NSA release its database.

He told Jones that all of Trump’s business locations were surveilled, offices of Trump International, “his secretary,” and his ex-wife Ivana “starting in 2004.”

Thirteen minutes from the end of the segment, Jones said that his Sunday show was the top trending story on The Drudge Report on Sunday.

At the 20:00 mark, Zullo detailed that Atty. Larry Klayman took former Arpaio confidential informant Dennis Montgomery to a federal judge to describe the government surveillance Montgomery alleged had been occurring.

In late 2013, Montgomery approached Arpaio with the claim that 150,000 Maricopa County residents had had their bank accounts breached by a government entity.  Arpaio then hired Montgomery as a confidential informant for approximately a year.

During the segment and in others on Sunday, Jones revealed that he and Trump have been in phone contact.

At 4:34, Corsi joined the conversation to state that “over the past week” he began speaking with Zullo about the presence of Donald Trump’s name in the records appearing in Project Dragnet abstracts.  He said that telephone calls Trump made to his project managers and other employees were captured by the government.

Corsi reported that conversations among attorneys involved in a civil case against Arpaio were harvested by the federal government.  The civil case led to a criminal charge by the Obama Justice Department just before the November 8 election, which Arpaio lost in his run for a seventh term as Maricopa County sheriff.

“Sheriff Arpaio was wiretapped during the trial,” Corsi told Jones at 23:04.

Referring to Montgomery as a “whistleblower,” Jones said that Montgomery went to Arpaio because he had no other options.

Zullo said that he does not believe that every member of the NSA is conducting illegal surveillance.  However, he said that “Montgomery deserves some type of hearing” on the information he shared with the federal judge and the FBI almost two years ago.

Trump has continued to insist publicly that he was surveilled even as the mainstream media has reported Trump’s claims as meritless.

“There are more reports coming out in the next week,” Jones said.  He said his office received threats after he learned of the existence of the database records.