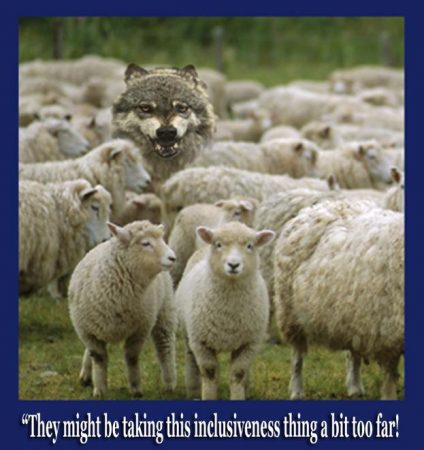 (Mar. 4, 2017) — Gross Schechter Day School is a Jewish day school whose mission is to encourage “creativity, exploration and self-discovery” by stressing “critical thinking, personal responsibility and global awareness.”  Their children are to be “active students of the global world,” making them the ideal subjects for a multicultural outreach program, such as the “No Place for Hate Workshop,” sponsored by the Anti-Defamation League (ADL).

The Workshop hype claims to prepare students to support and assist in resolving peer conflicts and to uncritically accept all manner of belief systems, cultures, ethics, values, behaviors, and religions.  They are being taught to abandon their own standards of morality while accepting the evils perpetrated by others, such as the oppressive woman-hating regime of Islam, where they chop off hands and feet for petty crimes and decapitate for other offenses.

Determined to set in stone this rejection of our own ethos, the ADL requires the children to personally sign a Resolution of Respect that would condemn them to a life of naïve passivity, like sheep led into a world of increasing violence and uncertainty.  Northampton Area School District’s Superintendent Joseph Kovalchik explained their acceptance this way: “The blend of ethnic backgrounds in the district has changed along with that of the country, triggering the need for the program.”  He failed to grasp that the program obliges the original residents to heedlessly accept the behaviors of the invading culture, rather than helping the newcomers to assimilate into its new culture – to become Americans.

Established in 1913 to “stop the defamation of the Jewish people and to secure justice and fair treatment for all,” the ADL has strayed from this vocation to promoting globalism, leftism, and an all-encompassing socialist government.  It began connecting with schools in 2015, only now approaching a tranquil Jewish day school in idyllic Middle-American suburbia, adjacent to a city declared by its foolish councilmen to be a “welcoming” community (with immunity from the law) to illegal immigrants.

The ADL is led by CEO and National Director Jonathan Greenblatt, a man with considerable experience.  Greenblatt served as director of the Impact Economy Initiative project at the Aspen Institute, funded by George Soros and five other billionaires through Soros’s Open Society Institute.  Their programs are designed to “assess” (and transform) American injustice (viewing America as immoral), social and economic problems (a step toward social engineering), structural racism (featuring racial inequity), and the Institute’s “Roundtable on Community Change.”  This cabal worked to engineer the defeat of President George W. Bush (2004) and John Kerry.

Greenblatt and Soros are now manipulating a “resistance” against President Trump during his First 100 Days.  Their Democracy Alliance, which also includes Nancy Pelosi, Elizabeth Warren, and Keith Ellison, has strategized full warfare against President Trump.  Greenblatt headed the office of Obama’s White House Social Innovation and Civic Participation, designed to place the responsibility of increasing anti-Semitism on the Trump administration. He apparently charged Steve Bannon with anti-Semitism because the latter knows of Greenblatt’s nefarious affiliations.  The accusation was walked back.

America’s teachers have already been indoctrinated by the Common Core standards and textbooks, and Soros’s many organizations can pave the road to acceptance of the No Place for Hate Workshop.  The Gross Schechter Day School, passive and uninformed altruists, is the perfect patsy for such as the ADL, an organization that continues to bathe in the light of its historic accomplishments.

One of their programs is titled “Anti-Bias Education: The Power of Social-Emotional Learning” – a leftist technique that indoctrinates for a social-justice agenda that is already ensconced in Common Core curricula.  The Type #1 philosophy of education that existed prior to Common Core requires knowledge-based, academic, grade-level-specific, clearly worded lessons that increase in depth and complexity from one grade level to the next, and measurable with largely right or wrong answers.  Its antithesis, the Type #2 used in schools today, minimizes academic knowledge; emphasizes process over the right answer; and stresses feelings, opinions, and beliefs over facts.  By accentuating subjectivity and relativism, all traditional and objective parameters are removed from the child’s inner landscape and they are readied for socialist indoctrination.

Included in this technique is self-awareness – to recognize one’s emotions, thoughts, impulses – used to instill in them a sense of uniformity.  Hence, the undeveloped mind is taught to view with suspicion everything that smacks of individuality, creativity, the recognition of differences, and of being able to discern right from wrong, good from evil.  Controlling their feelings, curbing their language, and retraining their uniqueness is classic brainwashing.  They are taught to read state-designed material, replacing the classics upon which are based our skills of reading, analysis and intellectual communication.

Another of the programs encourages youth-led movements to bring about significant social change, as their minds are steeped in specific, but Orwellian, terms – diversity, multiculturalism, peace, anti-racism, human rights – all seen through a jaundiced perspective and activism.  The mind control makes possible the creation of an obedient militia, and the students are ready to take their crusade from the classroom to the street.

This newly trained league forms the inspired soldiers, in thrall to the exciting idealism and political action.  It is evident in the Occupy Movement, Black Lives Matter, Never-Trumpers, Women’s March on Washington, and in the wanton flag-burning, window-breaking anarchy. While those randomly interviewed could not reason their activity to the reporter, they are programmed to educate others, advocate for legislation, run for office, demonstrate, and create public awareness campaigns through social media and the press.

At a time when hate crimes are increasing against Jews, Christians and other groups are suffering worldwide at the hands of Islamic ideology, and campus hate groups are proliferating, the ADL is otherwise occupied.

Where was the ADL when Oberlin College’s assistant professor Joy Karega was cited for posting on her Facebook that the Jews were responsible for 9/11 and the Paris massacre?  Where were they when pre-school teacher Nancy Salem, one of 23 anti-Israel activists at The Children’s Courtyard, advocated racist violence against Jews?  Where are they every time another BDS or SJP (Students for Justice in Palestine) group gathers in a college or university to stage another Israel Apartheid Week or shout down a visiting conservative speaker?

Perhaps these are moving along well enough and don’t require his intervention, but Greenblatt’s dander is up when President Trump proceeds with acts to keep America safe from the riots, rapes, and regrets that are plaguing Europe.  He raises his voice to condemn this President and his Executive Order, intending, no doubt, to thwart any interference with the distribution of peoples necessary to prepare for globalism.

The ADL’s artfulness in reaching out to private schools should compel us to contact the schools’ administrations, which must be made aware of this danger.  For their own protection, teachers and pupils need to learn to discern friend from foe, good from evil, and understand that we are all not alike, and should not be categorized and treated as such.  Only then can they hope to protect themselves from the onslaught of the combined civilizational warfare – the 1400-year Muslim conquests and the globalist left that work in tandem to dismantle and reshape our society, beginning with the minds of the young.

In a country that observes its Judeo-Christian values by taking in migrants from Islamic countries, tolerating the fact that their every prayer rings with hatred of Jews and Christians, we have seen no evidence that the ADL has instituted constructive programs where they are needed most – in Islamic schools and community groups.