“EXPULSION FROM PARADISE IS LESS THAN ONE GENERATION AWAY” 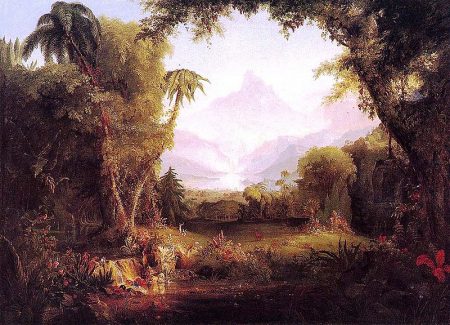 (Feb. 27, 2017) — The two competing factions in these United States have ideological differences that motivate them that are as different as the serpent’s and God’s in the Garden of Eden. While God made the right way of living clear to Adam and Eve, the serpent played to their self-interests and their desire to be “their own gods.” What happened in the Garden was just a preview of the differences the human race would support.

In modern times, “the Greatest Generation” was quick to defend our liberties by fighting in WWII. For them, a profound sense of patriotism was shared with passion. As great as that generation was, they were still flawed human beings. While they shared a noble sense of patriotism, they also shared a history that was experienced in the Great Depression. Many had parents who stood in long bread lines so that they would have something to eat, or worked long and hard days for less than enough pay to sustain their families.

This shared experience did not alter their sense of capitalism, but it did alter what they inadvertently taught their children.  They often said that they wanted their children to have everything they didn’t have. This sentiment paved the way for the materialistic and hedonistic ideologies that would soon develop among the spoiled Baby Boomers. Fifty years later, the classrooms across America supported a perverted sense of righteousness and socialism that would have embarrassed the serpent in the Garden of Eden. The “If it feels good, do it” generation of the 1970s added to the amorality of America with the sexual revolution, and mothers who once were the hands that rocked the cradles now became feminists who barely thought twice about aborting the babies in their wombs. For them, placing their own convenience above the well-being of their children subverted the protective instincts previously common among mothers.  So, they rationalized their divorces and all-consuming careers that in many cases left their children as motherless as they were fatherless – with government-run schools and gangs being more than willing to fill in the emotional gaps.  And Abraham Lincoln was proven right, as the philosophy in the classroom of one generation became the philosophy of government in the next.  Thankfully, not all of America fell victim to these new perversions.  There were still those who were nurtured and raised with the fear of the Lord, but their upbringing wasn’t as commonplace as it was fifty years prior.  If we are to judge based on the diverse and nonsensical protest rallies we are witnessing across the nation, the country is about equally split: half being secular hedonists who can justify anything that “feels” good to them at the time-even if it contradicts what they justified yesterday-and the other half placing righteousness above self-gratification.

As history has shown, cultural movements do have effects on the generations that follow.  But there was another “Great” generational movement in our history that had a different effect on those living a mere 35 years later. It was the Great Awakening. It happened during an era when the young Colonies in America had enjoyed a long time of independence from Great Britain. By the standards of their time, many lived comfortable and prosperous lives, unencumbered by over-regulation or interference from the King. The Crown respected their autonomy and in return, they respected their relationship with the Crown.  In their case, comfortable living led to a sense of self-reliance and political apathy. They still went through the motions of righteous living, but for many, the motions meant little more than attending weekly sermons that were watered-down and inconsequential.

Then something remarkable happened. It was in the person of George Whitfield, an English evangelist with a booming voice and a powerful message. His message was embraced by many pulpits across America who were soon “awakened” to the reality of God and His righteousness being something to embrace and live by. They taught their children the principles and precepts of an Almighty and loving God – a God who was to be feared as well as revered and loved. This was in stark contrast to the value of materialism that was inadvertently taught to the Baby Boomers. For the most part, the children of the Great Awakening were home-schooled, using the Bible as their primary reader. These parents taught their children more than just the words of the Bible, they taught them how to think critically about God’s precepts and principles. They learned that: “The fear of the Lord is the beginning of wisdom.” Proverbs 9:10. And so, they became wise. A wisdom that would help them to understand the deeper meaning of Romans 13, or when it was righteous to submit to authority and when it was wise to protest and rebel against rulers that were not ordained by God. This understanding fired up our pulpits and birth a new nation.

Looking back, it can be a marvel that they had such a firm grasp on God’s will. These ministers were given the term “The Black Regiment” by the British because of the black robes they wore. Due to their powerful sermons about freedom and their effect on the Revolutionary War, the British often commented that these ministers became the “regiment” that inspired the revolution, and was a regiment that was essential to its victory.  The Black Regiment understood Galatians 5:1:  “For freedom Christ has set us free; stand firm therefore, and do not submit again to a yoke of slavery,” as well as Romans 13:4, 1 Thessalonians 4:6, and 1 Peter 2:14, all of which tell us that those that govern over us do so for our good, and conversely, those that do not govern for our good, do not have God’s blessings.  They also understood that in this nation, our citizens were the true sovereigns and not some foreign power.

In order to understand God’s will, it is as important today to understand the whole of God’s Word as it was in 1776. For God is the author of liberty, and without God, surely the nation will collapse under its own perverted sense of righteousness – regardless of who may be our president. Should that happen, our expulsion from this City on a Hill will be as devastating as Adam and Eve’s expulsion from Eden. In order to re-awaken America, we need another Great Generation that understands that only a nation that worships and reveres Almighty God can stand against the wiles of the serpent or his many disillusioned servants.  And we also need that generation to teach their children the true blessings of liberty and the foolishness of living by what is right in their own eyes.  Then perhaps this great American experiment can survive, for without the mighty hand of God protecting us from the new breed of globalist tyrants funding today’s useful idiots, expulsion from our “Paradise” is less than one generation away.