LESS THAN 20 MINUTES TO GO! 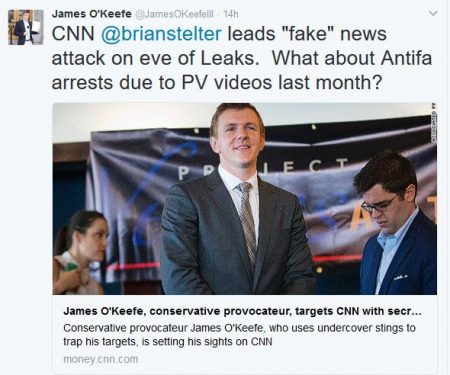 (Feb. 23, 2017) — Following his Wednesday announcement on Twitter of the impending release of the “CNN tapes” on Thursday morning, video-journalist and founder of Project Veritas James O’Keefe tweeted that CNN produced “fake news” in its interview of him, also published on Wednesday.

In his tweet issued later on Wednesday, shown at right, O’Keefe referred to three arrests made after he released video footage of activists planning a potentially lethal attack on citizens attending a pre-inauguration event called “Deploraball,” a spinoff on the adjective “deplorable” made famous by Trump’s Democrat opponent during the presidential election, Hillary Clinton.

“CNN @brianstelter leads ‘fake’ news attack on eve of Leaks. What about Antifa arrests due to PV videos last month?” O’Keefe wrote in a tweet at approximately 7:00 p.m. EST on February 22.

Stelter had claimed in his narrative that O’Keefe “has a reputation for shady tactics and exaggerated statements.”

In the last 30 days of the presidential campaign, O’Keefe released footage showing Democrat activists acknowledging questionable tactics in bringing people to the polls in previous years as well as possible illegal collaboration with the Democrat National Committee (DNC).  One operative resigned and another was fired from his position as a result of the airing of the footage.

Left- and right-leaning media as well as WikiLeaks have reported on O’Keefe’s imminent release of his latest project.  Media outlets apparently watching the developments are the Associated Press, Business Insider, the Washington Examiner, and Yahoo! News.