SINCE WHEN DID THEY STAND FOR THE U.S. CONSTITUTION WITH OBAMA’S ELIGIBILITY? 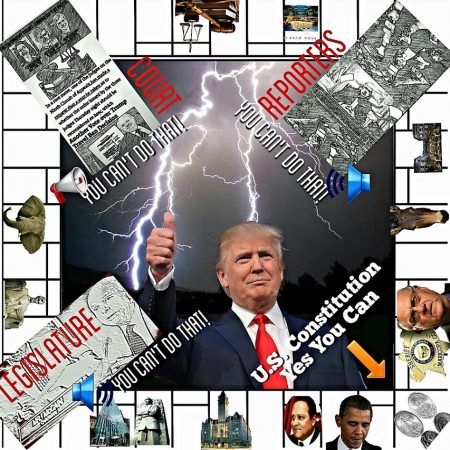 (Feb. 16, 2017) — To say President Donald J. Trump has been given a FREE get-out-of-jail-pass like Obama was given during the three years he refused to hand out his ‘long form birth certificate’, proven now by two forensic examiners specializing in different expertise fields for the deputized law enforcement Cold Case Posse under Sheriff Joe Arpaio of Maricopa County Arizona to be a Forgery or Fraud, would be SNL Comedy.

In today’s Press Conference (YouTube Link) President Trump asserted that the MSM faulty or fake news Reporting was completely out of hand.

“I’m making this presentation directly to the American people with the media present … because many of our nation’s reporters and folks will not tell you the truth and will not treat the wonderful people of our country with the respect they deserve,” Trump said.

President Trump also asserted the division here was created long before he arrived on the scene with Obama in for the last eight years.

[Members of the mainstream media were left fuming this afternoon (2-14-17) after President Trump refused to call on any of their organizations for the third straight press conference. Yet many of these same news organizations have likened Trump to the Taliban and Adolf Hitler, floated false rumors about his use of a Russian prostitute, and accused his administration of being pro-slavery.] TIME Magazine seems to have pulled the Holy Bible Out? [… New York billionaire has witnessed the lesson of Samson: toppling the temple can be painful if you try it from the inside.]

[“It’s dysfunctional, as far as national security is concerned,” says Senator John McCain, an Arizona Republican. “Who’s in charge? Who’s making policy? Who’s making decisions? I don’t know if anyone outside of the White House that knows.”] With Friends like McCain your ship is Sabotaged..again? Maybe it’s TIME Pres. Trump receive a Nobel Peace Prize? Sen. McCain has openly contested Trump’s pick of Rep. Mick Mulvaney’s (R-S.C.) to lead the Office of Management and Budget (OMB).

“My decision to oppose this nomination is not about one person. It is not about one Cabinet position,” said McCain, the chairman of the Armed Services Committee. “This is not political. This is about principle.” If McCain was so focused on Constitutional Principle, we don’t think he would have run for President milking all the Republicans for donations for an Office he was never qualified for as a Panamanian native born citizen, or foreign of one of the united “States” of America,  that opened the door for Obama another ineligible who actually set up residence for 8 years as usurper, appointing many Judges who are also now illegally appointed to the bench.

[Natural Born Citizen] expresses no foreign allegiance either by soil or parent in description Born in the U.S. to Citizen Parents, and is exclusive to the Office of the President and Vice President due to the concentrated powers of the Executive Branch unknown in the Judicial or Legislative Branches divided up in many more offices with the qualification of [Citizen].

The 9th Circuit Court of Appeals three Judge Panel ruled Trump’s Executive Order initiating a Temporary Restraining Order (TRO- 3 month) on seven war-torn countries was out-of-Constitutional Order; however, one Judge of the Circuit has voiced an en banc Review is in Order which means a Full Review of 11 Judges may over turn the three panel decision.

Since the Stay of the TRO (CNSNews.com) Reports– Sixty percent of the refugees admitted into the United States since a federal judge halted President Trump’s executive order designed to prevent “foreign terrorist entry into the United States” originate from five of the seven countries identified by the administration and its predecessor as most risky. Syria (532), Iraq (472), Somalia (363), Iran (117), and Sudan (65).

President Trump’s Desk Full of “No You Can’t by Radical Lefts Press, Legislature, and Courts added on Thursday, February 16, 2017

One Response to "President Trump’s Desk Full of “No You Can’t by Radical Lefts Press, Legislature, and Courts"