(Feb. 4, 2017) — On Saturday afternoon, President Trump tweeted his disagreement with Judge James Robart‘s granting of a temporary restraining order of the executive order Trump signed on January 27 banning would-be entrants from seven nations identified by the Obama regime as terrorist hotbeds and suspending the Refugee Resettlement program for 90 days.

Trump and his wife are staying at his Mar-a-Lago resort in Florida for the weekend.

Federal judges are nominated by the president, confirmed or rejected by the U.S. Senate and serve in the Judicial branch of government. The other two branches, Executive and Legislative, are represented by the President and executive agencies and Congress, respectively.

Robart issued his opinion late on Friday, and news reports indicate that the State Department has resumed allowing individuals from the seven countries already issued visas to travel to the United States.

The U.S. Department of Justice reviewed the executive order before Trump’s signature was placed on it to ensure that it was within the confines laws passed by Congress.

Much to the mainstream media’s dismay, Trump often uses Twitter to convey his thoughts and opinions on issues.

In a video constantly replayed in Yahoo! Email on Saturday, Washington State Atty. Gen. Robert Ferguson emphatically stated that the stay of Trump’s executive order was issued in accordance with “the Constitution.”

Ferguson had filed suit against Trump on behalf of the State of Washington, with Minnesota later joining the action.

Ferguson did not cite to which “law” he was referring.

The states are claiming that they will suffer “irreparable harm” if the aliens are not allowed to enter the country.

In response to laws relating to immigration passed in Arizona in 2010, the U.S. Supreme Court ruled that immigration is the purview of the federal government, not the states. 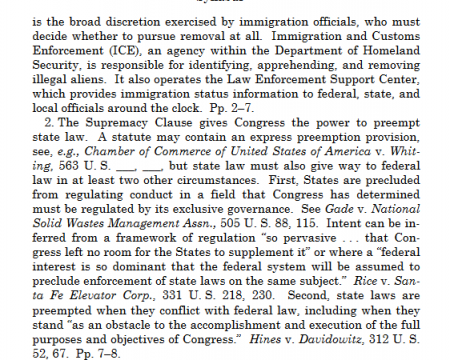 While Yahoo! on Friday night speculated that the administration would allow Robarts’s ruling to stand, indications are that that is not the case.  On Friday night, White House spokesman Sean Spicer said that the matter would be challenged in court “as soon as possible.”

The Post & Email tweeted back to Trump, “As an independent reporter, I would like to know on which law the judge relied in rendering his opinion. Is he activist?”

While we do not expect a response, this writer knows of no law mandating that refugees and immigrants must be allowed into the United States. Rather, the Immigration and Nationality Act (INA) of 1952 reformed immigration “quotas” from different parts of the world and states that the president may use his discretion to prohibit any group of individuals he perceives as a threat to the national security of the United States.

A summary of the law at State.gov adds that the McCarran-Walter Act “created a labor certification system, designed to prevent new immigrants from becoming unwanted competition for American laborers,” an item prominent in Trump’s campaign.

According to Section 279 of the law, U.S. District Courts have jurisdiction over alleged civil and criminal violations of it.

Some sections of the law have been repealed.

Section 212 bars aliens with communicable diseases, drug traffickers, children of those barred from entering such as convicted criminals, polygamists, draft evaders, and without a valid passport to enter the U.S.  It also states that “(F) ASSOCIATION WITH TERRORIST ORGANIZATIONS- Any alien who the Secretary of State, after consultation with the Attorney General, or the Attorney General, after consultation with the Secretary of State, determines has been associated with a terrorist organization and intends while in the United States to engage solely, principally, or incidentally in activities that could endanger the welfare, safety, or security of the United States is inadmissible.”

Another section of the law states of the president’s authority in determining entry of aliens:

Article II, Section 3 of the U.S. Constitution states that the president “shall take Care that the Laws be faithfully executed.”

Does a Federal Judge Have the Authority to Override the President? added on Saturday, February 4, 2017

13 Responses to "Does a Federal Judge Have the Authority to Override the President?"