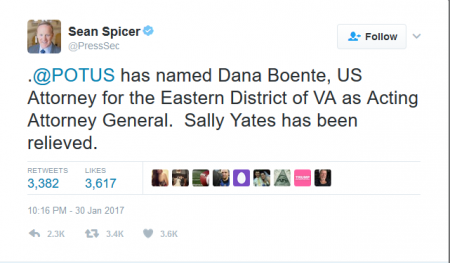 In events which may have coincided, Yahoo! News reported on its front page that Yates stated publicly that she could not uphold the order based on her stated belief that it violated the law.

Yates had additionally instructed her staff not to abide by the order.

In 2011, Obama delayed the processing of Iraqi refugees after two men admitted to the U.S. were suspected of terrorist activity in their home country.

In August, Yates had announced that the government would not renew contracts with private prison operators at the federal level.

While hearings have taken place in the U.S. Senate in accordance with the “advice and consent” provision of the U.S. Constitution, Sessions has not yet been confirmed.

On Monday morning, former White House occupant Barack Hussein Obama broke his silence since leaving the White House on January 20 to encourage, through a spokesman, protesters around the country to continue to protest Trump’s executive order, Which he pledged to implement during the presidential campaign in an attempt to prevent terrorist activity on U.S. soil.

It is not customary for a former president to criticize a current president, particularly during his first weeks in office.

Some in the mainstream media have characterized the order as a “Muslim ban,” a characterization the White House refutes.

Other media have termed it a “travel ban.”

As the executive order took effect over the weekend and travelers arrived from the targeted countries, chaos erupted at several airports around the country, after which ACLU attorneys rushed to step in on behalf of the wood-be entrants.  On Saturday evening, a federal judge placed a temporary stay on the executive order which maintained those arriving from the seven countries in detention rather than admitted to the country or deported.

The 1952 Immigration and Nationality Act (INA) provides latitude to the president to make decisions as to specific groups of people to be denied admission to the United States based on national security concerns.