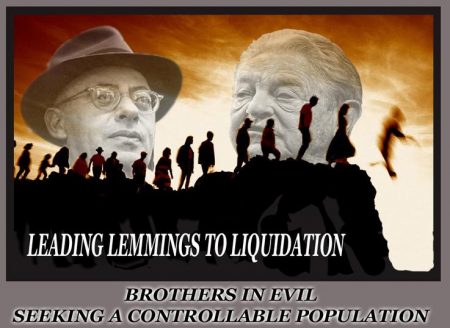 (Jan. 30, 2017) — History is replete with a plethora of infamous characters who lead many astray.  To be sure, they are as brilliant as they are conniving, and they are as charismatic as they are evil.  Unfortunately, they have other things in common as well: their inspiring words have wreaked havoc on their naive followers and all those who have had the misfortune of being subject to them. One such character is Saul Alinsky, who was one of the more effective modern-day illusionists.  Alinsky, an admirer of Lucifer, has had the allegiance of many elitists that have prospered by his teachings through the beguiling of those whom he called “useful idiot” (Hillary Clinton being among them).  He acknowledged two roots of power: money and people, and through his deceptive teachings, the generals in his war against the American way have amassed quantities of both.

So, just who are Alinsky’s “useful idiots?” These unthinking and duplicitous foot soldiers in the war against nationalism are today’s threat to our Constitutional Republic that ties the greedy and power-hungry hands of their demigods. These misguided do-gooders are easy to identify.  They are part of the Occupy Wall Street gang that didn’t have a clue about what they were protesting and yet were willing to spew hate and display their degenerate behavior against an unknown and unidentified enemy, one of whom their protests were being financed by.

Yes, the country is full of useful idiots, and unfortunately they can often been seen across media outlets of all kinds that validate their idiocy.  As for the rest of us, perhaps we would be wise not to indulge them but let them go the way of the Dodos, who should be declared their mascot of choice – a choice that befits their illogical and demented mindsets.​

2 Responses to "Alinsky Said it Best"