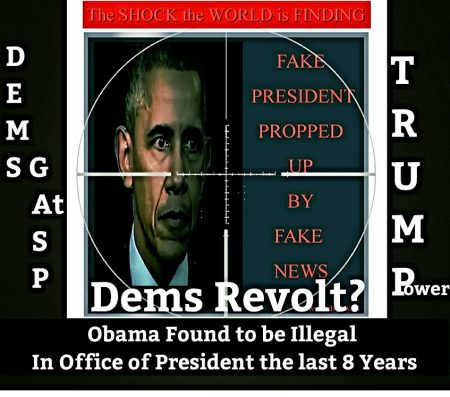 (Jan. 29, 2017) — For eight years Democrats and Establishment Republicans refused to see Obama as a constitutionally-ineligible person in the Office of the President. An illegal in the highest office was a slam to the U.S. Constitution and the requirements of [natural born Citizen] ie. born in the U.S. to Citizen of which not a single law suit will come upon President Donald Trump because, and get this quote out of U.S. Supreme Court Case Minor v. Happersett, “There is no doubt” about those born in the country to its Citizens.

President Trump just issued a 3 month ban on the citizens of seven war torn countries from entering the U.S. and the Democrats go nuts without any recollection of the pain that we have suffered and endured for eight years? Now what? The ship changes course and the boat gets rocked and “What United States Constitutional Protection” should they turn towards in their next eight years of pain?

What value have they given the U.S. Constitution who they seek desperately to save them now from President Trump’s Executive Powers? How they encouraged Obama to rule by fiat and now that fiat turned upon them?
Establishment Express Alarm

Senator Orrin Hatch of Utah, the chamber’s senior Republican, asked Trump to modify his order, noting that many of his Mormon ancestors were refugees from religious persecution.Democrats in Congress roundly criticized the order, as did some Republicans including Hatch, Arizona’s Jeff Flake and Ben Sasse of Nebraska

Can there be any denial that is not delusion to understand the long-form birth certificate was a fake, a fraud, a forgery in the face of Americans? And you think this has caused no pain? How Democrat reporters railed upon the Birthers? Now they are wailing about Executive Orders they once encouraged from Obama?

And now nothing short of an impeachment or a reckoning that Obama was in fact unconstitutional and the voters by that fraud have been defrauded out of the political circumstances our elections have been held under for the last three elections, that are now cause for a new election, can legally be turned to.

Has Hillary Rodham Clinton now acting to become the head of the coup against Trump as Federal Judges have their orders tossed in the can, decided the Constitution should be followed on Obama’s ineligibility, or does she just want chaos to be the scorn of her political loss? This is what happens when you get popular politicians who think themselves above the Law. Yet, the Law still asks for their help with a hand extended.