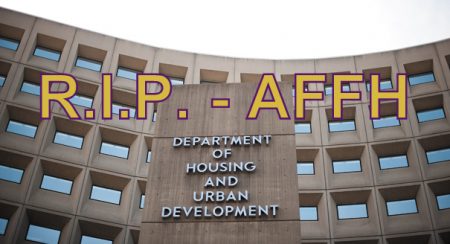 If you follow the news, you probably noticed that President Trump is moving quickly on his campaign promises.

You have also probably noticed that the Senate opposition is slow-walking his cabinet appointments to make it harder to for the president to address regulatory actions.

The reason Democrats believe they can slow Trump is because they know that Presidents who follow the law are limited in what they can do through executive orders.

For instance, a prior executive order is easily overturned by an incoming president.  But, if a federal agency creates a regulation out of an executive order, then, it becomes law, and only Congress can defund it or create another rule countering the first.  Much of AFFH is buried in regulatory law.

Without a Secretary to lead the agency and with limits on executive orders, what can a president do?  Well, in the case of Affirmatively Furthering Fair Housing (AFFH), a lot.

One of President Trump’s promises to Westchester County Executive Rob Astorino was to end HUD’s AFFH program.  AFFH is a 2015 HUD rule that expands the definitions of what constitutes discrimination and creates an application process that greatly exposes grant recipients to compliance reviews, lawsuits, and other legal actions for failure to comply with HUD’s increasingly dictatorial demands.

Donald Trump, acting on his own can easily incapacitate AFFH until the incoming Secretary can coordinate with Congress to fully eliminate the threat.  Even if the confirmation proves takes months!

Here are the bases for three executive orders, or they can be the less formal but equally potent executive memoranda, President Trump can pass to Housing and Urban Development that will temporarily halt AFFH while awaiting permanent measures.  There also three additional orders to assure AFFH does not harass communities.

Remember, any actions Trump takes by executive order can be easily reversed by an incoming president.  That is why it is important Trump and the Secretary work with Congress to create a new law that protects property rights and local rule from HUD’s encroachments in numerous areas that extend beyond AFFH.

Here is how President Trump can immediately stop the AFFH threat to communities.

Instruct HUD to remove all references to “regions’” and the requirement to align the Fair Housing Assessment application process and/or the grant recipients consolidated plan with a region.  This order applies to any grants associated with Affirmatively Furthering Fair Housing, including CDBG, HOPWA, ESG and HOME grants both by communities and public housing authorities (PHAs).

This eliminates the move by HUD to herd communities into regional planning under the guise of fair housing and preventing discrimination.

Instruct HUD to remove the requirement that, except with the agency’s permission, communities and PHAs must use HUD supplied data for creating plans when applying for HUD grant funds under CDBG, HOPWA, ESG and HOME grants.  Instead, allow communities to provide their own data.

Remove the statement in the HUD grant application requiring grant recipients to “take no action materially inconsistent with HUD’s goal of affirmatively furthering fair housing.” Replace with “recipients shall only use these funds in a manner consistent with the Fair Housing Act as passed by Congress.”

The “materially inconsistent” statement is the basis for False Claims Act lawsuits, one of several threats the agency uses to coerce communities into planning and zoning compliance.

Together, these orders will stop the immediate risks currently attached to AFFH related grants.  The next three will stop most HUD programs that use specious assessment and reports to gain collective community compliance.

This program enables HUD to relocate families, often against their will, and to resettle established communities with little regard to current residents, zoning laws, or personal property rights.

Instruct HUD to halt all programs related to the Move to Opportunity (MTO) initiative until the Secretary can re-evaluate the effectiveness of MTO and conduct a cost benefit analysis.

Instruct HUD to cease educational and training efforts at the department’s four regional Equity Assistance Centers regarding “income diversity” and “upward mobility” until the programs can be re-evaluated by the incoming secretary.  This includes flyers, electronic messaging and all other forms of communication.

In June 2016, HUD formed a team with the Department of Education and the Department of Transportation to advance classroom diversity in all elementary and secondary schools using income as its basis.  The program is extrapolated from former President Obama’s 2017 HUD budget item entitled, “Stronger Together.”  This entire program needs review.

In addition, there are important issues of the application of “disparate impact” and the reapplication of HUD grant funds which must be addressed by the Secretary.

These steps are not permanent solutions.  They are stop gap measures that protect communities from the immediate threat of AFFH related grants and establish that the administration intends to fully overhaul the AFFH program.
John Anthony, Founder Sustainable Freedom Lab