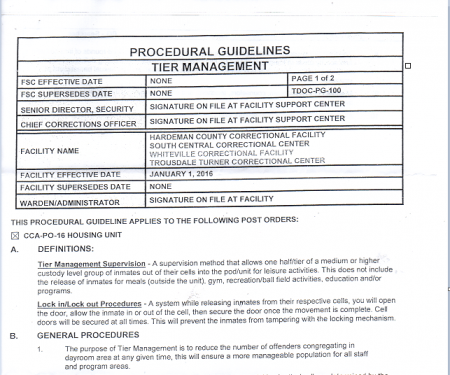 (Jan. 21, 2017) — The following letter and chart supplement those received and published last week from inmate Grenda Harmer on the controversial “Tier Management” system used in Tennessee’s prisons and specifically at the Trousdale Turner Correctional Center (TTCC) in Hartsville, Trousdale County.

Tier Management was instituted by former Tennessee Department of Correction (TDOC) Commissioner Derrick Schofield and allows the inmates in one-half of a unit, or “pod,” out of their cells while the other half remain “locked down.”

In the TDOC Administrative Policies and Procedures manual dated June 15, 2014, it is stated in Index #506.14, Section VI, subletter F. that “Each Warden shall promulgate the necessary institutional policy and procedures governing housing arrangements for inmates in accordance with this policy and incorporating the Tier Management Supervision of his/her facility.”

In an exit interview with Schofield last June, NBC News reported that the intention of Tier Management was “to better control high-risk populations.” However, the method has been used at TTCC with minimum-security prisoners, with some convinced it has been instituted as a cost-saving measure for the facility’s owner, CoreCivic.

Harmer claimed in both communications, sent to Tennessee Gov. Bill Haslam, TTCC Warden Blair Leibach and others, that Tier Management “is designed to keep inmates who do not have a job in their cells and inflict mental torture and abuse.”

Many inmates at TTCC have described out-of-control gang activity at TTCC and other Tennessee facilities.  In its article last June, NBC reported that both inmates and TDOC staffers expressed the same concerns for prison safety in light of erroneously-documented incidents involving prison gangs.

Rather than “gang activity,” the TDOC reportedly refers to gang membership as “participation in a security threat group” (STG).

“Staff began to leak internal documents to the press and advocate for change alongside prisoners’ families, who said they feared for their loved ones’ safety,” NBC reported of the TDOC’s failure to both document and take action on the gang threat.

Documentation enclosed with the inmate’s letter titled “Procedural Guidelines Tier Management” defines “Tier Management Supervision” as “A supervision method that allows one half/tier of a medium or higher custody level group of inmates out of their cells into the pod/unit for leisure activities. This does not include the release of inmates for meals (outside the unit), gym, recreation/ballfield activities, education and/or programs” (p. 3 below).

The document pertains to the four Tennessee prisons operated by CoreCivic.

Most of the TTCC inmates from whom we have heard have said that virtually no recreation time, employment, or educational programs exist at the facility and that any available employment is most often awarded to gang members.

Lockdowns have been documented as lasting up to 23 hours daily and in some cases, exceeding that amount of time.  The second chart contains two additional days of data, ending with January 11 instead of January 9.

“All time frames can be corroborated by the cameras in the Unit,” Harmer wrote before signing the document and sending it to various state legislators and members of the media. 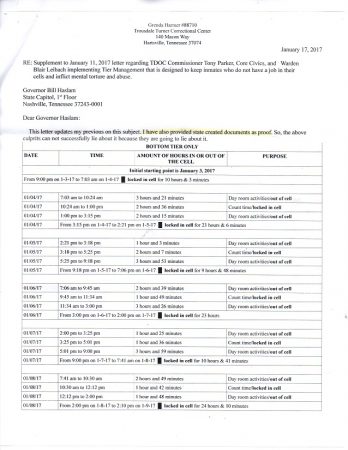 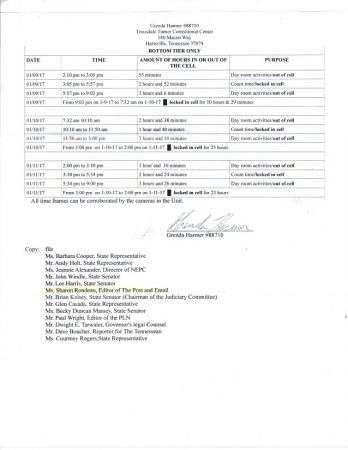 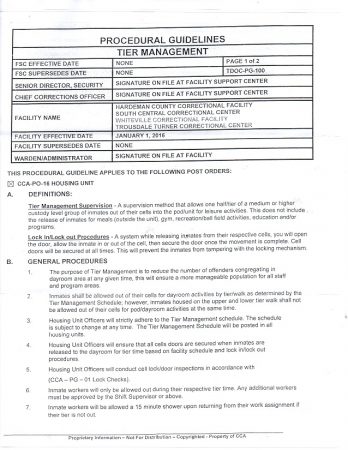 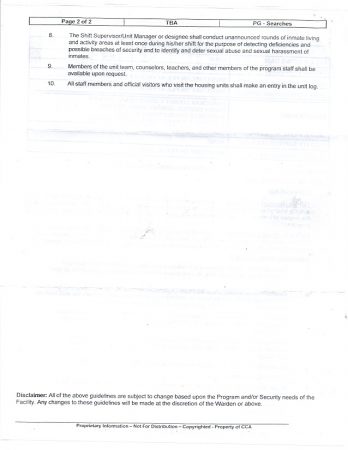 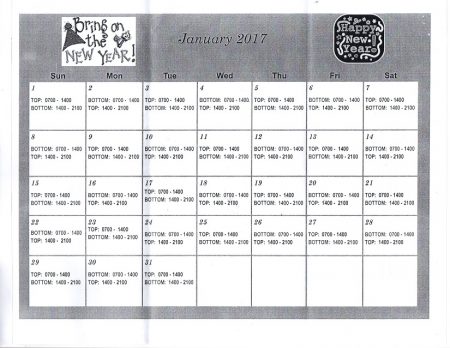