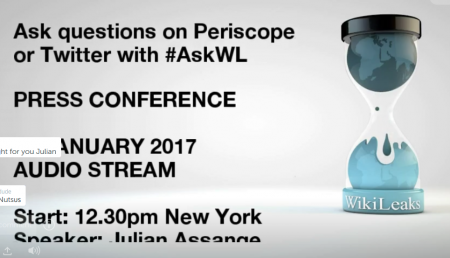 The presser was scheduled to begin at 12:30 p.m. but is running late.

Assange had said that he would agree to be extradited to the U.S. on federal grand jury charges if Obama commuted the 35-year sentence of former U.S. Army Pvt. Bradley Manning for releasing over 750,000 pages of classified documents which WikiLeaks subsequently published.

Assange explained that the grand jury which indicted him was convened at the request of the U.S. Department of Justice.  He stated that all emails of journalists working for his organization were seized.

Assange believes the case against him is manufactured, and an attorney representing him here claims that no information has been released to him.

The details of his “pending prosecution” has not been made public, Assange said, because the Justice Department believes it would compromise it.

Assange said that he and his attorneys believe that they can overcome any charges lodged against him once they are made public.  He said that the case “should never have been brought” and cited the Obama regime’s record of prosecuting three times as many whistleblowers and journalists as all of the previous administrations combined.

“This case is entirely bogus,” Assange said at 1:04 p.m.  He said he has a First Amendment “right to publish.”

Assange said, however, that “There are bad journalists” which he said do not fact-check before publishing and often do not make corrections once they are made aware of an error.

At 1:35 p.m., Assange said that the U.S.’s prosecution of him makes no sense since he is an Australian citizen publishing from Europe and not subject to U.S. law.