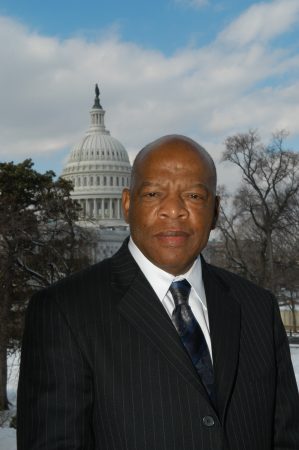 (Jan. 18, 2017) — If it were not so comically hypocritical, it could even be called neurotic.  Specifically, the contention by Congressional Black Caucus operative John Lewis that Donald J. Trump does not qualify as a “legitimate president” is beyond neurotic.  It is borderline delusional.  One is reminded of the Internet joke about death now circulating: “When you are dead, you don’t know that you are dead.  It is difficult only for the others.  It is the same as when you are stupid.”

Compounding that condition, leftist Nobel (forgive the redundancy) laureate Paul Krugman notes in a Pravda on the Hudson op-ed piece that Congressman Lewis’s assertion that Mr. Trump will not be a legitimate president constitutes an “act of patriotism.”   Krugman haughtily claims that Mr. Trump got his start in politics by “falsely questioning Mr. Obama’s right to hold [the] office.”

Memo to Krugman (with a copy to Lewis): the assertion that Mr. Obama possessed some “right” to hold the office of the presidency against the backdrop of not just mountains of evidence to the contrary, but entire mountain ranges of such evidence, boggles the mind.  It is “ipse dixit” (“it is so because I say it is so”) elevated to an art form.  Then again, people believe what they want to believe, so it is unsurprising that people like Mr. Lewis and Mr. Krugman – and millions of other folks too lazy or insouciant to bother with the facts – continue to indulge in the belief that while Mr. Obama was a “legitimate” president, Mr. Trump will not be.

As your faithful servant has maintained for the past, what, going on six years, the person who will be vacating (mercifully) the residence at 1600 Pennsylvania Avenue in less than a week is not now, was never in the past and will never in the future be a “natural born Citizen” as contemplated by the Founders.  By specifically restricting in Article 2, Section 1, Clause 5 of the Constitution the office of the presidency to a “natural born Citizen, or a Citizen of the United States, at the time of the Adoption of this Constitution…,” the Founders sought to erect the “highest barrier” then available to insulate and protect the office from the insinuation into it of any foreign influence.  That’s “any”… as in “none.”

As noted here, that “highest barrier” then available to the Founders in 1787 took the form of § 212 of the tome “The Law of Nations” by Emmerich de Vattel.  That treatise was one with which the Founders were not only familiar; it was, according to one Benjamin Franklin, a source “which had been continually in the hands of the members of our Congress now sitting…,” (emphasis added).  U.S. Steel Corp. v. Multistate Tax Commission, 434 U.S. 452, 462, fn. 12 (1978).

Fast-forward to the Obama usurpation of the past eight years: the Internet image of a document purporting to be his original “long form” Hawaiian birth certificate – and as to which a myriad of anomalies strongly point to its nature as a forgery – proves, if anything, that he is not now, never was and never will in the future be a “natural born Citizen” under the criteria set by § 212 of de Vattel’s work.  This is because the image itself – even if it is ultimately shown to be a forgery – establishes that his father was never a U.S. citizen, but instead was a citizen of Kenya when the birth occurred, purportedly, at the Kapi’olani facility in Honolulu.

Concededly, it would serve little purpose to re-hash all of the evidence pointing to the usurper’s constitutional ineligibility at this late hour.  After all, the nightmare on Pennsylvania Avenue is coming to an end.  Moreover, the potential for the U.S. Supreme Court taking up the issue instead of continuing to “evade” it is, on a scale of 1 to 10, a minus 42, unless, of course, another Republican seeks the office and the leftists demand that the issue be settled.

But the notion now being advanced by Messrs. Lewis and Krugman that the person vacating the White House was “legitimate,” while the man about to move in will not be “legitimate,” is hypocritical nonsense.  It is the same species of gibberish coughed up by kindergartners when logical arguments have failed to carry the day.

And as noted above… it is the same as when you are stupid.

One Response to "It’s Eligibility, Stupid"