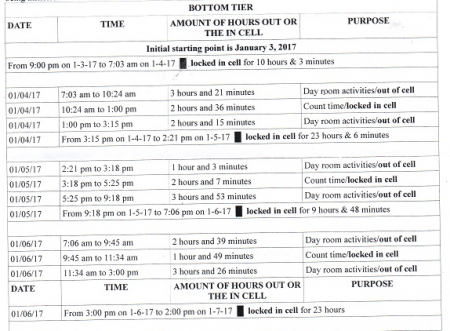 The letter is from inmate Grenda Harmer, who is housed at the Trousdale Turner Correctional Center (TTCC) in Hartsville, a privately-run prison where tier management is among a myriad of complaints lodged by inmates with this publication and others. None of the prison’s residents has been at the facility for longer than a year, as TTCC opened its doors last January to severe and continued short-staffing.

TTCC is one of four Tennessee prisons owned and operated by CoreCivic, formerly known as Corrections Corporation of America (CCA).  The company prides itself on the 22-month time frame to which it adhered in constructing and opening TTCC.

In an NBC News article dated June 9, 2016 featuring a photo of the Trousdale facility and noting that it was forced to stop admitting new prisoners the month prior due to problems, both the purpose of the Tier Management system and criticism of it are presented.  While Schofield claimed it would “maintain order” in Tennessee’s 14 prisons, internal detractors said that it “prevented prisoners from going to their jobs and other programs.”

The lack of employment has been a major concern among TTCC inmates in addition to dangerous conditions from roaming gang members and an almost-continuous state of “lockdown,” on which Mr. Harmer’s report focuses.  Addressed to Tennessee Gov. Bill Haslam, TDOC Commissioner Tony Parker, CoreCivic, and the facility’s warden, Blair Leibach, Harmer wrote that the Tier Management system is “designed to keep inmates who do not have a job in their cells and inflict mental torture and abuse.”

In chart format, Harmer reports that inmates are kept “locked in cell” for more than 23 hours out of each day in some cases and that on January 8 day, inmates in the “Bottom Tier” were locked in their cells for a period exceeding 24 hours.

Following the chart he presents demonstrating the amount of time prisoners are reportedly locked in their cells, Harmer wrote, “…This is not about the safety and security of a prison, it’s all about being brutal towards inmates and convicts. Tier Management has no redeeming value and is only making Tennessee prisons more dangerous…” 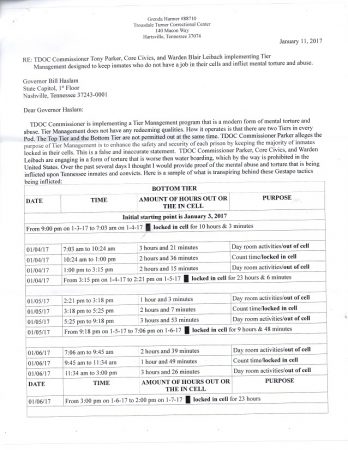 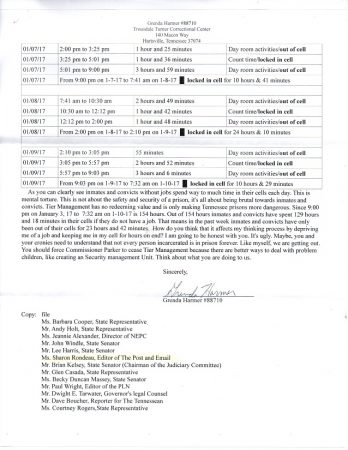 As with his previous letter to Haslam, Harmer copied a number of state legislators, Dave Boucher of The Tennessean, this writer, and two outside advocates of prison reform.