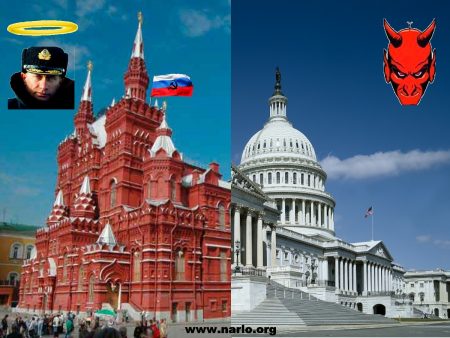 (Jan. 15, 2017) — Now before you turn all red-faced and apoplectic from the title, we’ll explain.  Our last week’s article was entitled “Putin Needs to be Injected With a Large Dose of Estrogen.”  In the 11 years we have been writing a weekly column, we have never received so many vitriolic, vile and openly hostile responses to one of our articles.  The “hate America” crew and 911 conspiracy theorists came out of the woodwork to attack the entire premise of the article, which was Putin just isn’t a good guy and is in fact an existential threat to American sovereignty and security.

A couple of the “crew” were from Canada, but most of the arguments of the dissenters were focused on the idea that Putin had every right to invade and claim Crimea for Russia because George Soros, with American involvement, put $5 Billion into destabilizing Ukraine.  And correspondingly, Putin had every right to invade Ukrainian territory because the people in the eastern part of Ukraine were of Russian descent.

Many of the critics to the article used language fit for a teenage boy’s locker room.  Many of them were rude and impugned our character and intelligence.  Some said they would never read our articles again.  A woman critic named Nancy claimed she had an advanced degree “in something” (didn’t say), but her use of the English language was guttural, if not sewer-like, at best, belying her claim of being well-educated.  One critic stated that the “neocons want war with Russia so that it can join the New World Order.”  Most of this “hate America” crew are devotees of the discredited conspiracy theorist Paul Craig Roberts who believes the Tsarnaev brothers didn’t set off the pressure-cooker bombs in Boston.

But the argument that it is OK to invade another country because the inhabitants of that country share common ancestry with the aggressor doesn’t wash.  If that were the case, then Mexico could invade Southwestern America or vice-versa, because many of the inhabitants of Southwestern America share a heritage with native Mexicans.  Without national boundaries there is no sovereignty.  An invasion of another country, for whatever reason, is an act of war by any definition.

Now we don’t claim to be a world expert on geopolitical issues.  However, there is enough information to know that the major superpowers are playing a geopolitical push-and-pull chess game with smaller countries, and not just in Eastern Europe.  Europe and the U.S. were trying to pull Ukraine away from Russia and into NATO.  Russia didn’t like that, as Ukraine was part of the old Soviet Union.

None of the criticisms justify Vladimir Putin to march into sovereign territory and claim it by force of arms.  In a predictable response to Putin’s military overtures in Eastern Europe, opposite military pressures are mounting against Putin.  As we speak, NATO battle groups are being sent to the Baltics and Poland that include U.S. Special Forces.  Do they want a war?  NO!  They want to deter a war.

During the Russian-Separatist aggression in Ukraine, an attempt was made by the countries of Ukraine, France, Germany and Russia to stop the fighting in Eastern Ukraine under the Minsk Protocol Agreement signed in September of 2014.  The Russian-backed separatists, fully armed with Russian heavy hardware, immediately started violating the Agreement.  So again in February of 2015 the countries got together to hammer out the provisions of a Minsk 2 Protocol.  Minsk 2 was repeatedly violated over the next year.  Separatists’ violations only began to decrease after Russia entered the Syrian conflict.

Putin will continue to agitate the situation in Eastern Ukraine and the fighting will not stop until Ukraine prevails or Russia claims Eastern or all of Ukraine for Russia.   Let’s not be fooled here.  Russia, under Putin, is the continuing provocateur in all cases of the conflict, as he expands Russian boundaries to the edges of the old Soviet Union.

As we stated in last week’s article:  “Putin openly lamented the breakup of the Soviet Union and from his actions it appears he has designs on restoring Soviet power as a dominant force in all of Asia and parts of Eastern Europe.  Russia’s invasion into the Georgia provinces of Abkhazia and South Ossetia, are a peek behind the Putin curtain of his vision of Soviet dominance.  The annexation of Ukrainian Crimea and invasions into Eastern Ukraine in 2014 added to Russian boundaries, in Putin’s desire to restore the power, influence and grandeur of the Soviet Union.  Putin has his eyes set on the Baltic nations of Estonia, Latvia and Lithuania as well, which were once part of the USSR.”

On January 5th, 2017, members of the Intelligence Community testified before Congress that they were 100% certain that Russia was behind the hacking of the DNC and John Podesta’s e-mails, with the motivation of affecting the outcome of the 2016 presidential election.  Further, they stated that the Russian hacking was known by or instituted by the highest levels of the Russian Government, meaning Putin.  Are they lying?  We don’t know, but why would they ALL lie?  Here is the link to the report.  You decide:

Senator John McCain called Russia’s interference into America’s election process an act of espionage and was therefore an Act of War.  We fully agree with Senator McCain even though that Act of War may have saved America’s freedom, sovereignty and prosperity from the clutches of a perpetual Progressive – Socialist ideology under Hillary Clinton.

But the push-pull chess game by superpowers is not a new phenomenon.  It’s been going on for millennia.  When England was the major superpower and it claimed territory around the world for England, it was playing a geopolitical chess game for territory, natural resources, finance and control of merchant shipping in an overt act of open imperialism.  The boundary lines of many nations that exist today were shaped and re-shaped by English rule under the threat of the powerful British Navy.  The boundaries of India, Pakistan, Israel, Syria, Lebanon and Iraq resulted from British partition.  Wars are still being fought over these British-engineered boundaries.

Today, China is expanding its powers throughout its region of influence, including taking over portions of the South China Sea by building military bases on manufactured islands in international waters.  It continues to threaten to re-claim an independent and sovereign Taiwan.  Once again, China, a superpower, sensing weakness in American resolve, is pushing the limits of its boundaries and claiming land and sea it does not rightfully own under international law, while Obama does nothing.  China engages in cyber attacks against American business interests and our government, with no counter-actions by the Obama Administration.  In other words, there is no price to pay for any other country engaging in acts of cyber war against America.  That, ladies and gentlemen, is national weakness and an invitation to national suicide.

Meanwhile, Commander-in-Chief Obama has ordered every carrier task force back in port.  There is no carrier task force at present, prowling international waters to respond to acts of aggression by other nations, leaving America in a perilous military readiness condition.  Was this by accident or by Obama’s premeditated design to weaken America around the world just prior to leaving office?

Russia and China, both superpowers, are pushing the limits of their sovereignty as far as they can go without starting World War III, because America, under Obama, has failed to project its power to stop them or make them pay a price.  As we stated in our previous article: “Either subdue the bully or the bully will own you, or enslave you, or kill you.”   Had President Kennedy not militarily challenged the Soviet Union under Khrushchev, there would still be Soviet missiles in Cuba aimed at America.  If Trump does not stop or hold in check these bully superpowers, the future of a free, sovereign and prosperous America is in grave doubt, along with world peace.

We’ll admit that America’s foreign policy leaves a lot to be desired, especially under Obama, but at least we aren’t invading sovereign territory with military force, with the exception of those flagless, radical Islamic barbarians that attack us, hiding in other countries.

Ukraine did not attack Russia.  It was the other way around.  However, the “hate America” critics to our last article seemed to put a halo over Putin’s head.  Their distorted logic is, Putin’s OK, because America has done the same thing and is just as bad, or worse.

Putin did join with Bashar al Assad of Syria, another brutal bully and despot, to crush the Syrian opposition.  Putin’s Russia is also an ally of the largest exporter of world terror on the planet, Iran, and openly defies American interests.  Putin, the alpha male, easily ran circles around Obama, the omega male.  Putin is a bully, a thug, a narcissist, a killer, a murderer, an assassin, a brute and a despot.  He is, without any doubt, an existential threat to world peace and to American sovereignty and security.  America ignored Hitler and his defeat came at great cost.  How long will America wait before it openly challenges the bully Putin?

It would appear that our recent article on Putin has brought out a number of people who reside on the extreme edges of the “Bell-Shaped Curve.” some of whom resorted, unprofessionally, to expletives undeleted.  This apparent “hate America” crew appears to elevate all foreign leaders and their national interests above American interests while demeaning American interests.  Is America perfect?  Of course not.

The main point of our last article, in our opinion, is that Putin is no “clean-cut Russian boy.”  In fact, he is very dangerous.  It seems strange that some people are having such a hard time understanding that.  Still, the criticisms to our last article continue to drift in.  Hopefully, THIS article will inhibit any further criticisms, but we aren’t holding our breath.

Regardless of the vitriolic criticism of and attempts to emasculate our last article on Putin, we stand by it ….. without apology.  This will be our last word on the subject and we will move on to other subjects in subsequent columns.   In the words of one French philosopher: “let … que mes critiques manger le gateau.“

Even though we write about national and international issues, our organization’s major focus is being advocates for America’s rural landowners.  If you are a rural landowner, you owe it to yourself to check out the NARLO website HERE.  The information and services we provide to rural landowners is without equal.