A “CELEBRATION” FOR MANY 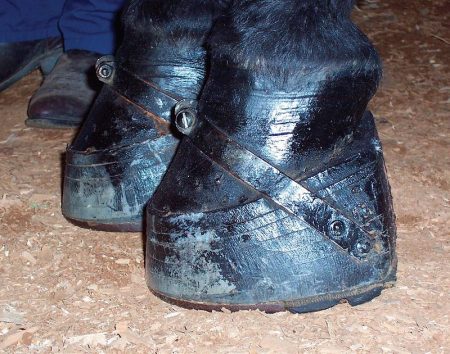 (Jan. 13, 2017) — As predicted by animal-cruelty activist BillyGoBoy on Thursday, the U.S. Department of Agriculture (USDA) on Friday issued a new regulation with the purpose of better enforcing the Horse Protection Act of 1970, which forbids the showing or transporting of a “sore” horse.

Soring is a decades-old practice often passed down through generations of trainers of Tennessee Walking Horses and several other “gaited” breeds which inflicts pain on the horse so that it will lift its front legs unnaturally high, exhibiting a pace favored by certain horse-show managers and owners.

To produce the unnatural gait, high shoes called “stacks,” hoofbands, chains, and other devices are sometimes used in the show ring to provide the horse an advantage in high-stepping competitions.

BillyGoBoy and his supporters have been active throughout the South where horse shows feature horses which have allegedly been sored prior to showing.  Because of the very limited budget for “designated qualified persons” (DQPs) as outlined in the Act to inspect horses prior to showing across the country, HIOs, or “horse industry organizations,” were tasked with performing the inspections.

BillyGoBoy and others, including a former trainer who was sentenced to a year in prison and a fine on an animal cruelty conviction stemming from soring, have said that it is impossible to produce the desired unnatural gait in a Tennessee Walking Horse without employing soring techniques.

A 2010 report by USDA’s inspector general found that HIOs often have conflicts of interest when performing inspections.  The new rule had been under consideration since last spring, followed by a series of internet and in-person consortia over the summer to elicit comment from the horse trainers, event managers and the general public.

A bipartisan majority in Congress had supported proposed legislation to end soring, but the bill stalled in April 2015.

In a news release on Friday announcing the change, the Humane Society pointed to Tennessee as the seat of soring practices.  “Soring involves the intentional infliction of pain – by mechanical or chemical means – on the feet and lower legs of horses to achieve a high-stepping, pain-based gait known as the “big lick” in Tennessee walking horses. Controversy over these practices has resulted in many good people fleeing the sport, crippling attendance at the main events for the industry, and staining Tennessee’s reputation for more than half a century,” the organization wrote.

According to HSUS President & CEO Wayne Pacelle, a trainer accused of soring horses was indicted in 2015 by a grand jury but not prosecuted by order of a judge in Blount County, TN.  The trainer, Larry Wheelon, then acted as a judge at the National Celebration held in Shelbyville, TN.

This publication has documented copious examples of judicial corruption in Tennessee, where grand juries are manipulated by sitting criminal court judges.   Cronyism, prisoners-for-profit operations, and collusion among defense attorneys and prosecutors have been noted, as well as jurors serving in violation of the law.

Pacelle praised USDA Secretary Tom Vilsack for announcing the rule, which will be entered into the Federal Register and take effect 30 days afterward.

“National Celebration” CEO Mike Inman announced that his organization would likely mount a legal challenge to the new regulations and is hopeful that the incoming Trump administration will delay their implementation.

On Friday, BillyGoBoy posted the major changes to be implemented from the new regulation in his own words:

The new rules will be fully implemented by January 1, 2018 unless repealed or modified.

One Response to "New Rule Issued to Prohibit Horse Soring"