Trump to Hold Press Conference at 11:00 a.m. EST on Wednesday

HAS THE PROPAGANDA REACHED EPIC PROPORTIONS? 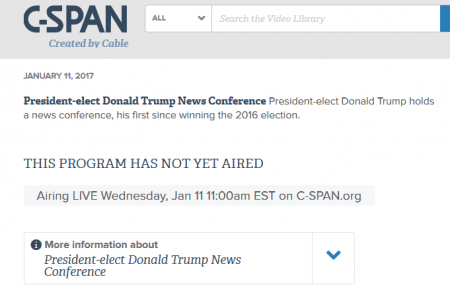 (Jan. 11, 2017) — President-Elect Donald J. Trump will hold a press conference at 11:00 a.m. EST on Wednesday which will be broadcast live on C-Span and on the Fox News Channel.

In its Twitter feed, WikiLeaks has asked whether or not Trump will address the “politicization of the CIA.”

Earlier on Wednesday, Trump made comments on Twitter relating to a story released by the left-leaning Buzzfeed and CNN referring to “Golden Showers” which Trump claims is planted “fake news.”

A YouTube channel is also carrying the presser. At 11:05 a.m., the Star Spangled Banner was being played from a professional audio-recording.

At 11:08 a.m., the Battle Hymn of the Republic is playing, as Trump has not yet taken the stage.

Pence also called out the media for promoting a “fake news” story.

At approximately 11:19, Trump took the podium and thanked the media in general for flagging the fake story.

At 11:25, Trump announced that he has made his choice for Secretary of the Veterans Administration (VA), David Shulkin.

In response to a question from a reporter, Trump said that “I think it was Russia” as to claims of “hacking,” most likely of the DNC last summer.  Trump has formerly expressed doubt on reports from the U.S. intelligence community claiming “Russian hacking” which has been connected, although vaguely, to the November elections.

DNC emails were released by WikiLeaks, which claims its source was not Russian or any “state party.”

At 11:31, Trump said that much was learned from the “hacking,” including that Hillary Clinton was provided debate questions in advance.

Trump affirmed to a reporter that he has no business relationship with Russia.  “I have no loans, no dealings, and no pending deals” with Russia, he said.

Abruptly at 11:38, Trump introduced an attorney from Morgan Lewis to explain how Trump will divorce himself from the day-to-day business of running his global real-estate empire.

Although the latest law passed by Congress on conflicts of interest would allow him to run his company also, Trump has chosen not to do so.

Trump will reportedly move all of his business assets into a trust before he is sworn in on January 20, with sons Eric and Donald Jr. to run the company.

Daughter Ivanka and her husband, Jared Kushner, will have no involvement in the Trump Organization.

All “pending” business deals for 2016 were canceled, the attorney said.

At 11:50, the attorney mentioned the “emoluments” clause of the Constitution, which she referenced, and said that “all profits from foreign-government payments” garnered from the use of Trump properties will be donated to the U.S. Treasury.

The purpose of the changes in structure to the Trump Organization is to avoid any conflict of interest as Trump assumes the running of the United States government.