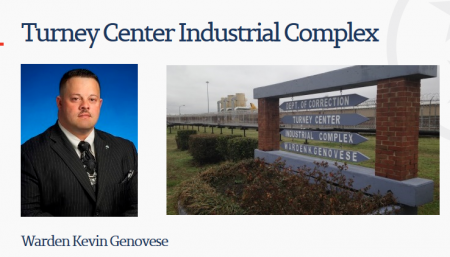 (Jan. 5, 2017) — Earlier this week, The Post & Email received an oversized package from an inmate at the Turney Center Industrial Complex (TCIC) in Only, TN measuring nearly two inches in height.

We had received a letter from the same inmate, Harold Bernard Schaffer, several months ago and made an inquiry on his behalf to a TCIC administrator which was ultimately addressed in a letter by Tennessee Department of Correction (TDOC) Communications Director Neysa Taylor.

Mr. Schaffer appears to be a copious communicator and reports that he has been incarcerated on a life sentence since 2004, having served other sentences beginning at age 16. He said that he has spent time in all of Tennessee’s 14 prisons and claims that the numerous relocations he has experienced result from retaliation for complaints he has filed with various government agencies and the media over prison conditions.

His most recent mailing contains multiple sections, much like the chapters of a book, which address specific items he has encountered while behind bars.  Included with the various missives are several newspaper articles, a complaint filed with the U.S. Department of Justice Civil Rights Division against the TDOC and 11 of its employees, and a similar complaint directed to the Tennessee Department of Human Rights for the Division of Civil Rights.

Mr. Schaffer included an Administrative Policies and Procedures manual issued by the State of Tennessee, Department of Correction bearing the date “June 15, 2014” which is more than one-half-inch thick.

Another enclosure is the Westlaw version of Tennessee Code Annotated Title 41, Correctional Institutions and Inmates, TCA 41-1-103, which states that “All officers and other persons so employed to control and manage the penitentiary for the state shall, before entering upon the discharge of their duties, take and subscribe the following oath:

The Lexis-Nexis presentation of the law reads:

The State of Tennessee does not appear to publish its laws on a state-owned website as do many other states.

In one of the stapled sections of the mailing, Mr. Schaffer indicated that while on his way to the prison law library one day, he was questioned by a correction officer as to whether or not he planned to further contact “Nashville” or “The Post & E-Mail” [sic] while there.

In another section, Schaffer wrote that a correction officer caused an inmate to bleed at the wrists from excessively-tight handcuffs and that another officer assaulted an inmate such that he “was beat so bad that there are still light remnants of his blood stains on the side walk coming out of the housing unit.” [sic]

The section presented below is a letter Schaffer wrote to Tennessee state representative Brenda Gilmore, copied to state representatives Mike Stewart and Harold Love, Jr. as well as The Post & Email.  In the letter, Schaffer alleges that the TDOC employs a “monopoly of rewarding purchase contracts to certain individual vendors or companies for guaranteed under the table kick backs, like the new Aramark food contract, or the fact that when our family comes to visit with us, and they desire to be in our presence as much as we desire to have our family around, they are being harassed by the Correctional Officer Visitation Staff to a point of being discouraged from coming back to visit.”

Schaffer also makes reference to the “prisoners-for-profit” scheme first described by Walter Francis Fitzpatrick, III in early 2015 which Schaffer refers to as an “overly oppressive federal grant writing machine, who’s only interest is class room attendants, and program development, when the facts are, that many of these inmates are repeatedly placed into both the classroom and programs, after it has been determined that they have either reached their learning potential, or that they don’t actually need the program they are being required to take for what is sometimes a second, third and forth time in an effort to obtain and defraud the taxpayer Mr. and Mrs. John Q. Public out of as much grant money as possible, there are some prisoners that has been locked into taking ABE, and Vocational Trade classes for as many as Three, Four, and Five years and has not made any progress…” [sic]