OF “CRIME” AND “PUNISHMENT”

(Dec. 28, 2016) — The Post & Email has received a letter from an inmate at the Trousdale Turner Correctional Center (TTCC) containing the names and inmate numbers, reportedly provided with those inmates’ permission, of prisoners reportedly not receiving doctor-prescribed medications at the privately-run facility in Hartsville, TN.

The letter was received on the same day that a letter from a different inmate at the same prison arrived excoriating Tennessee Gov. Bill Haslam over what he said is negligence on the part of the Tennessee Department of Correction (TDOC) and CoreCivic, a private company which runs four prisons in the Volunteer State contrary to state law.

The inmate reporting that medications are not dispensed on a timely and regular schedule has written to us on the same topic on a number of prior occasions.

The medications are referred to by Centurion, a private provider contracted by CoreCivic, as “K.O.P.,” or “Keep on Person.”

The inmate theorized that as a for-profit concern, medications are withheld so as to save the company money and boost its bottom line.

“Here is the following people who did not get their meds.  Now some have been out days weeks and months,” he continued, after which he provided a list of inmates and their TDOC numbers, which can be found in the online TDOC search tool, alleging that they are not receiving their medications.

The inmate’s reference to “Mrs. Taylor” is to TDOC Communications Director Neysa Taylor, who without investigating first has said that all of the accounts we have received from inmates and their relatives concerning TTCC and other Tennessee prisons are “inaccurate.”

As the inmate who wrote to Haslam stated in his letter describing unrestrained gang members essentially running the prison, the inmate here observed, “Now when there in [sic] no punishment for the medical provider they will continue to do this.”

He referenced the “lockdown” in which the prison has been maintained since a gang fight on Thanksgiving Day, November 24. 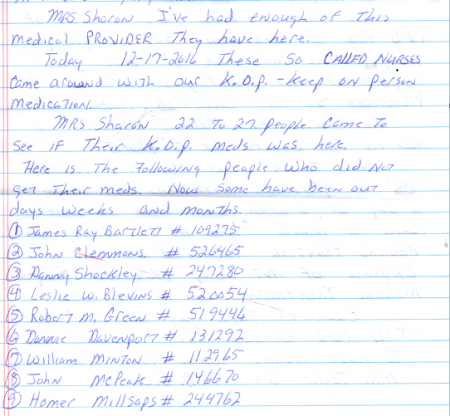 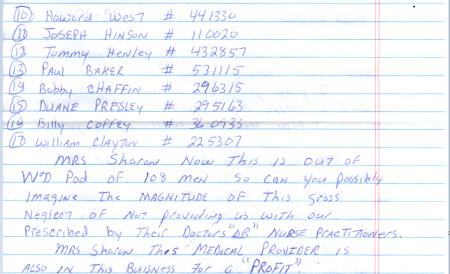 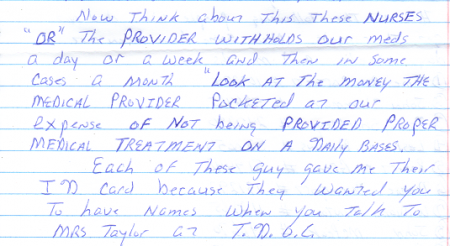 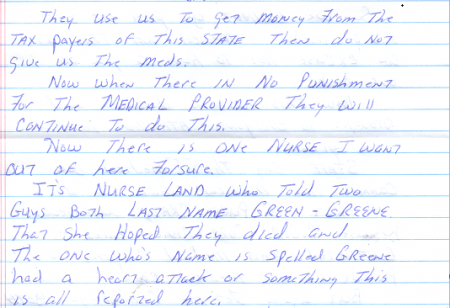 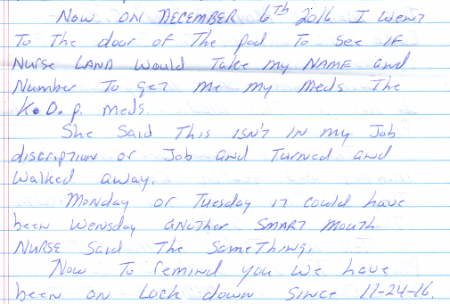 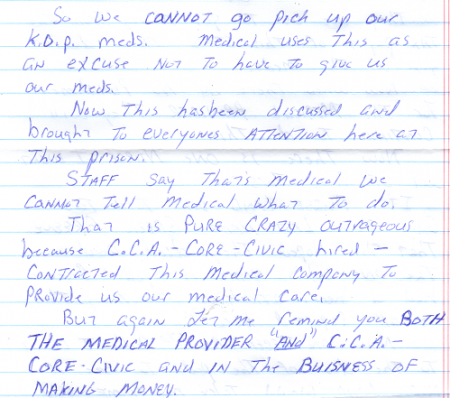 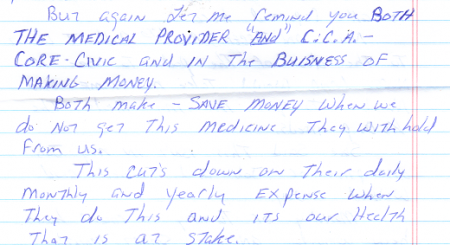