(Dec. 23, 2016) — A second inmate at the Trousdale Turner Correctional Center (TTCC) in Hartsville, TN has reported that he is falsely documented in the prison TOMIS system as being employed.

A letter which arrived on Tuesday from a different inmate reported the same thing.

Both inmates say they have never performed work nor been paid anything during their time at the sorely understaffed facility which opened in January.

The second inmate, Ronald Allen, who we have identified previously with his permission, also offered insight into an incident occurring between rival gang members on Thanksgiving Day described by some as a “riot” and by others as a “gang fight.”

On page 3 of his letter, Allen described overnight noise caused by “inmates roaming the guilds” between the hours of 9:00 p.m. and 6:00 a.m. as disruptive to sleep and “out of control.”

Allen is in the process of writing to state and federal officials to report the falsity of his “job” apparently entered by prison management.  He has filed a Title VI civil rights complaint with the Tennessee Human Rights Commission, which referred it to the Tennessee Department of Correction (TDOC), and submitted an Inmate Request Form to TTCC authorities asking why he is noted as employed when he is not.

The lack of prison employment, in fact, has been a major complaint of the minimum-security inmates who have regularly written to The Post & Email over the last eight months after their transfer to Trousdale.

TTCC is owned and operated by CoreCivic, formerly known as Corrections Corporation of America (CCA). Since the early spring, a plethora of violations, abuses and transgressions on the part of the prison have been reported by both inmates and their relatives.

TDOC spokeswoman Neysa Taylor has insisted to this publication and others that such problems do not exist, although an Associated Press report issued in May appeared to confirm many of the eyewitness accounts provided to The Post & Email.  The AP cited a March 17 report written by a TDOC official which, having noted several deficiencies, served to temporarily stem the arrival of new inmates.

The Post & Email has since been told that prisoners are arriving in significant numbers and that the facility now holds over 2,000 despite the persistent severe staffing shortage.

Tennessee law allows for only one privately-operated prison within the state, but there currently are four.  CoreCivic also runs detention centers. When CCA rebranded itself as CoreCivic earlier this month, its website was changed, with some functionality still not restored.

There have been “riots” and “falsified records” reported at other CCA facilities in the West. 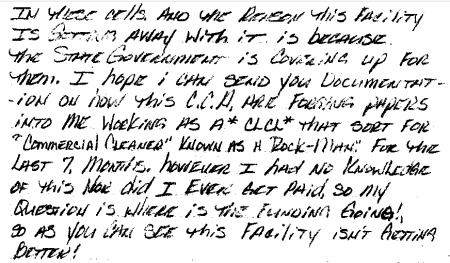