“YOU CAN’T MAKE THIS STUFF UP”

That is the present size of Title 26 of the U.S. Code, i.e. the “Internal Revenue Code.” One would think this would be nearly impossible for an enterprise wielding an army of tax experts to absorb, let alone the average taxpayer. However, it doesn’t stop there.

The IRS has added an additional 7.7 million words of tax regulations designed to clarify what the original 2.4 million words mean. You can’t make this stuff up. Add 60,000 pages of tax-related case law essential to accountants and tax lawyers, and the burden is revealed.

More than 10 million words with a hidden annual compliance cost of up to $1 trillion. This is what Title 26 of the U.S. code and the Federal Register is estimated to cost the United States economy each year. 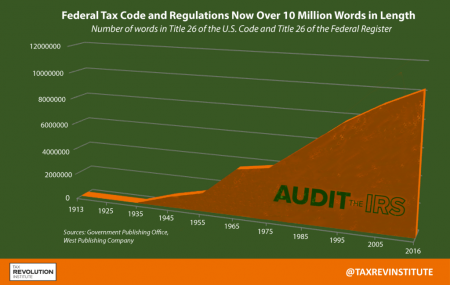 To put this into perspective, the Encyclopedia Britannica — 32 volumes that contain the general knowledge of man — is 44 million words in length. This means that in order to understand the federal tax code and its supplementary regulations in their entirety, one would have to absorb highly complex tax language that is nearly one quarter the length of the entire Encyclopedia Britannica.

Indeed, Albert Einstein said it best when he noted that “the hardest thing in the world to understand is the income tax.”

As one can ascertain from the positive trend in Figure 1, the complexity of the tax code and its supplementary regulations is continuing to climb at an alarming rate. This is exacerbated by growing layers of provisional carve-outs, loopholes, and special privileges.

Using data from the Office of Information and Regulatory Affairs and U.S. Bureau of Labor Statistics, the Tax Foundation estimates that it will take Americans more than “8.9 billion hours” per year to ensure compliance with Title 26 of the U.S. tax code and Federal Register. This is equivalent to 4.3 million Americans doing nothing other than working on tax compliance for the entire year in 2016.

Taken together, data from the Office of Information and Regulatory Affairs and U.S. Bureau of Labor Statistics reveal that tax compliance will cost the U.S. economy roughly $409 billion in 2016. In 2011, the Laffer Center estimated said cost at $431.1 billion.