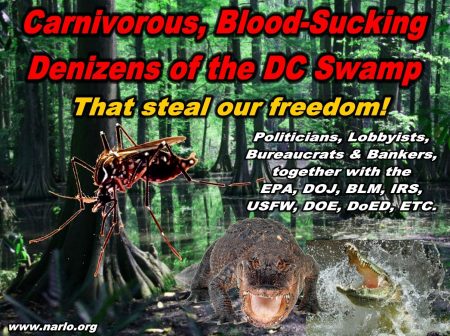 “The ‘system’ is an intertwined entanglement of interlocking national and international interests of commerce, finance and trade, accompanied by government enablers of the ‘system’ in the executive, judicial and legislative branches of government.  The tentacles of one interest are inextricably interwoven into the tentacles of all the other interests.  Finding out what drives one, leads to a complex maze of closed doors, backrooms and secret meetings.  All the sources are purposely hidden and camouflaged.  Traces to find the truth go down dead end paths, or are blocked by impenetrable obstacles.  Sources of the ‘system’s’ power are elusive and they are anything but constitutional.  The ‘system’ exists because of citizen apathy and survives, thrives and grows on the people’s money and special interests.”

“Law drives the ‘system’ and as laws increase, the ‘system’ becomes more inflexible, expensive and grossly inefficient.  Eventually, these metastasizing maladies of inflexibility, rising costs, inefficiency and resistance to change, drive the “system” into corruption.  The “system” becomes so powerful that it becomes virtually impossible to change without an extraordinary effort.  Sometimes violence is the only way to change the ‘system’.”

The term “Drain the Swamp” in a political sense allegedly goes back to 1903 when Winfield E. Gaylor, State Organizer of the Social Democrat Party, said, “socialists are not satisfied with killing a few mosquitoes which come from the capitalist swamp, they want to drain the swamp.”

In more recent times, House Minority Leader Nancy Pelosi has used the term to demean those pesky Republicans.  Ronald Reagan used the term as well but more directed at the bureaucracy.

In the more pragmatic sense, “Drain the Swamp” meant to get rid of the environment which allows mosquitoes carrying the Malaria virus to grow.

But who are those fierce alligators and blood-sucking mosquitoes in the political swamp that certain politicians and the people want to eliminate, since “Draining the Swamp” takes away the ecosystem that allows the alligators and mosquitoes to thrive and survive.  Obviously, it depends on your point of view.

Now if you are a freedom-loving, Second Amendment, God-fearing American, you want to eliminate those politicians and bureaucrats in the “Swamp” that don’t subscribe to or support the Constitution of the United States, as designed by the Founding Fathers.  In their minds, “Draining the Swamp” means to get rid of all the politicians and bureaucrats that overtax, overspend and pass laws and regulations that interfere with their perception of freedom.  Since most politicians overtax, overspend and over-regulate, getting rid of a large percentage of those politicians or bureaucrats would be the ultimate goal.

But if you’re an on-the-dole freeloader, or a Democrat voter, you want to eliminate those politicians and bureaucrats (and those Republican voters) who interfere with the timely arrival of your government check or benefit.  If you are a Democrat politician or bureaucrat, you want to make sure that those government checks and benefits arrive safely in the freeloaders (or an illegal alien’s) mailbox so as to assure your election or re-election.  (See “A 1, 2, 3 Punch That Doomed America’s Constitutional Republic“)

Which brings us to President-Elect Donald Trump and his efforts to build a cabinet and fill other government posts, prior to taking office in January of 2017.  Much criticism has been levied against Trump for choosing cabinet candidates and other posts that would seem to be the same carnivorous alligators and blood-sucking mosquitoes in the very swamp Trump says he wants to drain.

A few notables come to mind, one being the Ex-Governor of Massachusetts, Mitt Romney, a second being former Goldman Sachs executive Steven Mnuchin for Treasury Secretary and a third being Elaine L. Chao for Transportation Secretary.  Although Mitt Romney has yet to be appointed to any cabinet position at this writing, he is, without a doubt, an establishment Republican and a fierce critic of Trump.  Steven Mnuchin is a financial insider with a history at Goldman Sachs and making movies and Elaine Chao was the previous Labor Secretary under George W. Bush, but is also the wife of Senate Majority Leader, Mitch McConnell, a clear conflict of interest.  There is a lot of inter-breeding, incest and nepotism in the “DC Swamp.”

Romney is a fraud, apparently an ambitious one and devoid of honor.  If Romney hated Trump so badly that he would work diligently to see that Trump didn’t get the Republican nomination and then work against Trump in the general election, why, then, would he take a position in the Trump cabinet?  But more importantly, why would Trump even consider Romney for a cabinet post?  Mnuchin and Chao are just more “denizens of the swamp.”

Having said that, in spite of all these ferocious alligators and blood-sucking mosquitoes in the political swamp, to which group of people does Trump go to build a presidential cabinet?

In a recent article we wrote:

“It must be abundantly obvious to anyone with half an intellect that the huddled masses and the poor don’t build or run anything.  So if it wasn’t for powerful, wealthy, ambitious men, steel wouldn’t have been made, skyscrapers, bridges, locomotives and ships would have not been built, oil would not have been extracted from the earth and refined into gasoline, fuel oil, paints, resins and nylon stockings, and a largely untamed land would have not been tamed. And if it weren’t for the bold financiers who took the huge risks to fund those ventures, none of it would have been possible.“

The same applies to running a huge government with many bureaucracies and departments.  There are only so many people in America that have the experience to run a huge government bureaucracy, much less a United States Congress.  You don’t just pull someone off the street and ask him or her to be Secretary of State.  The American people, bright, dumb, or dull, elect their representatives and who they elect is a reflection in a big, giant, political mirror.  But presidents appoint their cabinet posts, subject to the advice and consent of the U. S. Senate, and they must draw upon the available “talent.”

Sadly, the available “talent” can become obsessed and addicted in a rich environment of power where billions of dollars change hands in an hour, an environment that creates the “swamp” of political corruption.  So, once again, who are those people that occupy the political swamp that everyone wants to drain, but for different reasons?  The ferocious alligators and the blood-sucking mosquitoes in the political swamp are the very politicians that the people keep electing and directly reflect what over 50% of the masses want.

Ladies and gentlemen, we cannot expect our politicians to be free of corruption if the American people themselves are corrupt, hopelessly apathetic, or just plain stupid.  If the American people are without honor or intellect, it is quite likely that those they elect to public office will also be without honor and subject to the endless temptations of power, money and sex, not necessarily in that order.  It is folly to expect our representatives to be more perfect than those who put them in office.

But a nation still needs powerful, wealthy and ambitious men and women to create, finance, invest, invent, market and build things and yes, to run government offices, local, state and federal.  The trick is to keep their power, their wealth and their ambition in check.  Laws can’t do that alone.  Only the American people who are honorable and care about their freedom can do that.  After over two centuries of trying, we are rapidly failing.  As a result, our identity as a free nation and a people and our very sovereignty are slipping away.

In the final analysis, the American people get what they want from government and they get what they ultimately deserve by their own choices.  If the people want “free” things, paid for by someone else, then the people will inherit individual and national weakness, massive debt and the “denizens of the political and corrupt swamp.”  If, however, the people grow tired of weakness, debt and corruption and want honor, honesty, integrity, individual strength and freedom instead, they will get an honorable, honest, financially sound and a strong, free nation.  It’s that simple.

Maybe November 8, 2016 was a turning point, but we aren’t holding our breath in anticipation.  There are just too many Americans who want the “free” things, paid for by someone else, and they can vote for the alligators and blood-sucking mosquitoes in the political swamp to preserve those “free” things.

If you LIKED this article, let us know.

Ron Ewart, a nationally known author and speaker on freedom and property rights issues and author of this weekly column, “In Defense of Rural America.“narlo  Ron is the president of the National Association of Rural Landowners (NARLO) (www.narlo.org), a non-profit corporation headquartered in Washington State, acting as an advocate and consultant for urban and rural landowners.  Affiliated NARLO websites are “SAVE THE USA” (http://www.stusa.us/) and “Getting Even With Government” (http://www.gewgov.com/).   Ron can be reached for comment HERE.

Who Occupies the Swamp That Needs to Be Drained? added on Sunday, December 11, 2016