(Dec. 6, 2016) — On Sunday morning, The Post & Email received a comment from the relative of an inmate at the Trousdale Turner Correctional Center (TTCC) operated by the private company CoreCivic, previously known as Corrections Corporation of America (CCA) alleging that the troubled facility has been in “lockdown” since Thanksgiving Day, November 24.

The comment became the substance of an article published later that day and was sent to Tennessee Department of Correction (TDOC) Communications Director Neysa Taylor, from whom we received no response.

On Tuesday afternoon, a comment on the same topic was submitted, now published below Sunday’s article and alleging that a “riot” took place at TTCC on Thanksgiving.

It is typical for prisons to impose a state of “lockdown” following a gang uprising, as in the July 24, 2015 incident at NWCX.  TTCC has been reported to be in an almost continuous state of lockdown since early spring, when The Post & Email began receiving letters from inmates transferred there from other Tennessee facilities.

We then sent the comment to Taylor in the following message:

Hello, Ms. Taylor, the following comment was submitted by a reader – I know who it is and have spoken to the person on the phone but promised to keep the person’s identity confidential – who has a relative at TTCC.  The identity in this case does not matter since the person’s account contains no prisoners’ names.
There was a riot on Thanksgiving. Can’t call it anything less — it was a gang war. Many reports directly from inmates say that at least 65 (SIXTY FIVE) inmates were injured and required medical care either in the facility or at the local hospital. The inmates have been on lockdown and have been told it will last until January. Minimum security, well behaved inmates who have done nothing wrong are being continually punished and confined to their cells, denied phone access, and also (recently) microwave use in their units.
There has been a continuing shortage of staff since this CCA facility opened in the Spring — most recently, prior to the riot, a unit was on lockdown because there were not enough staff to manage that area.
There has been another death at the facility — unrelated to the riot, the death occurred in the days prior to the riot. The death is likely to be proven to be a direct result of TTCC negligence.
*** Inmates die in the prison and are brought to the outside hospital as a “medical emergency” so that they can be declared dead AT the hospital rather than at the prison.
— the local Nashville hospital that services inmate medical emergencies is a good place to visit for proof that these events are in fact taking place. Guards are stationed outside any hospital room that has an inmate patient inside.
CCA meanwhile – held its annual Christmas party in Galatin, TN , this past Saturday , December 3, 2016, with the invitation to staff and employees to come and “Eat, Drink & Be Merry” … something is SERIOUSLY wrong with that picture.
— yes, attention and action needs to be brought to the ongoing TTCC situation IMMEDIATELY !
The comment was made in response to the following article:
http://www.thepostemail.com/2016/12/04/report-trousdale-turner-prison-on-lockdown-since-thanksgiving/
Can you confirm or deny that there was a “riot” at TTCC on Thanksgiving?
Sharon Rondeau, Editor
The Post & Email
www.thepostemail.com

At 1:24 p.m. EST, we received the following response from Taylor, copied to another TDOC spokeswoman, Alison Randgaard:

There was no riot on Thanksgiving.

Randgaard is assigned to “Middle and West Tennessee.”

TTCC is located in Hartsville, Trousdale County, in the northern-middle section of the state. It opened its doors last January, although new admissions were temporarily suspended in mid-March after the TDOC cited it for deficiencies and possible excessive use of force on the part of a correction officer against an inmate.

The dozens of letters The Post & Email has received allege the following conditions within the prison (this list is not exhaustive):

When an inmate is a member of a gang, he is termed “affiliated.”

In late May, a relative of a TTCC inmate predicted that “Something’s going to happen” at the prison based on the perilous conditions inside.  At approximately the same time, WKRN Channel 2 reported contraband provided to at least one TTCC inmate, who was using it to post material to a Facebook page.  “News 2 uncovered the page while investigating complaints from former employees about work conditions, training, and safety concerns inside the Corrections Corporation of America (CCA) facility,” the station’s website reported.

Mail arriving from TTCC inmates to this publication has fallen considerably over the last several weeks. In the following letter received from a minimum-security inmate on Tuesday, he makes reference to “what happened on Thanksgiving Day” without elucidating. The Post & Email will be inquiring of the inmate, whose accounts of prison life at the facility have been considered very reliable, the details behind his reference.

Though water-damaged, the letter is quite readable to this writer. However, scanning the pages revealed the extent of the damage, making it difficult to read in electronic format. Therefore, The Post & Email has reproduced the inmate’s salient points which describe a December 1 interview conducted by a CoreCivic employee.

But I saved you the “BEST” for last. The CCA – Core Civic Cooperate [sic] lady came here yesterday to do a survey about this prison. 12-01-16 I spoke with that lady.

Well they picked me (smiley face) as one to voice my concerns. 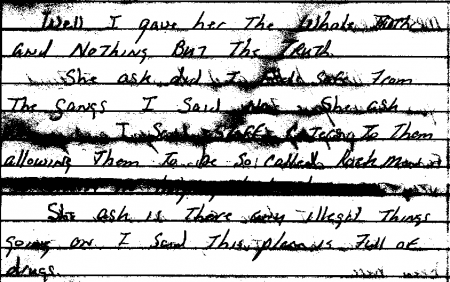 She asked did I feel safe from the gangs I said no. She ask why.  I said staff caters to them allowing them to be so called Rock Men to assist in helping lock down.

She ask is there any illegal things going on.  I said this place is full of drugs. 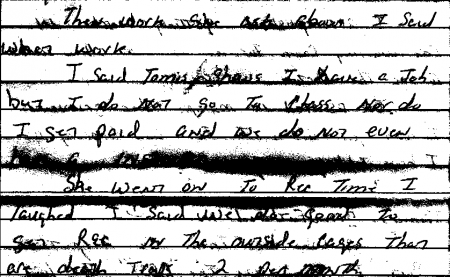 Then work she ask about I said what work.

I said TOMIS shows I have a job but I do not go to class nor do I get paid and we do not even have a instructor.

She went on to rec time.  I laughed I said we do good to get rec in the outside cages that are death traps 2 per month.

[TOMIS] is Tennessee’s electronic inmate record system, which is available to the public.

She said are the officer approachable I said in most cases No.

I told her what occurred on Thanksgiving Day.