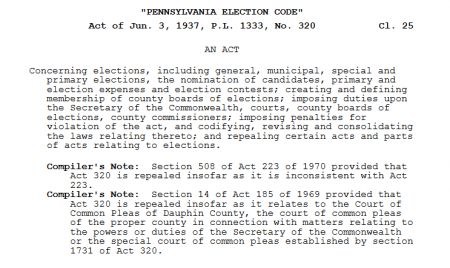 (Dec. 4, 2016) — On Saturday, December 3, various news outlets reported, based on documents released by the Commonwealth Court of Pennsylvania, that Green Party presidential candidate Jill Stein had withdrawn her election contest of the results of the November 8 presidential election.

Her challenge in that jurisdiction is now considered “closed” by Per Curiam order.

The documents pertaining to the now-defunct case have been relocated from the home page of the Pennsylvania Unified Judicial System website to a subsection titled “News and Statistics,” subsection “Cases of Public Interest.”

In a statement released Saturday evening, Stein cited what she described as “antiquated election law” and an inability or unwillingness to post the $1 million bond ordered by the court on Friday, December 2.

Although having raised over $7 million at that time, Stein characterized “voters” as the victims of the court’s bond requirement and alleged lack of “interest in giving a fair hearing” to Pennsylvanians’ “concerns over the accuracy, security and fairness of an election tainted by suspicion.”

Stein has thus far shown no evidence of any tampering, hacking or stuffing of ballot boxes, among other possible forms of election fraud, in Pennsylvania.

In a direct entreaty to would-be supporters last week, Stein asked that Pennsylvania voters file petitions for recounts in their districts, notwithstanding that no voter had reportedly claimed “fraud or error,” in accordance with Section XVII, 1701, a.1, (2) i.) of Pennsylvania election law, within five days of the election as is mandated.

Last week, Stein reported that “recounts” in Pennsylvania and Wisconsin were “funded” based on the donations she had received at the time, but Pennsylvania law precluded any county from performing a recount since they must be citizen-initiated, duly sworn and accompanied by a $50 “bond,” and follow a specific time table, the deadline for which had already passed.

Stein claims she received her now more than $7 million from “over 130,000 small donors.”

On Thursday, the Republican Party of Pennsylvania and Electors for Trump/Pence filed a brief objecting to Stein’s election challenge on the grounds that her lawsuit was submitted “on the last possible day for filing,” November 28 and that she had failed to show evidence that the election results were unreliable.

The order reveals that Stein’s attorney had requested a $25,000 bond, while electors for Donald Trump and Mike Pence, who were declared the presidential and vice-presidential winners in Pennsylvania in the early hours of November 9, asked the court to demand a $10 million bond.

The Republican Party failed to cite, however, that Stein’s lawsuit was not submitted with the statutorily-required five sworn citizen affidavits for an “election contest,” as Jander reported on Friday.  “Only five properly verified petitions are necessary to confer jurisdiction. The notarizations attached to some verifications are also not sufficient to confer jurisdiction, but Stein’s lawyers have attempted to obscure the technical deficiency. The verifications with notarizations attached are also not sworn statements sufficient to subject petitioners to perjury charges, as is required to avoid the case being dismissed with prejudice, since the deadline to file has now passed and they cannot cure the fatal defect, as was confirmed by the Pennsylvania Supreme Court,” Jander wrote.

Mainstream media reports did not cite Pennsylvania’s election law, which states that in order for a “recount” of votes in a particular district to take place, three registered voters who cast votes in the election must submit affidavits stating that they believe an error or some other type of irregularity occurred during the voting process.

Last week, Stein asked would-be supporters of her “recount” efforts to file affidavits in their local jurisdictions, but the law dictated that the time frame for filing any request for a recount was November 21, days before Stein announced that she would challenge the election results in the three aforementioned states.

The state of Wisconsin billed her $3.5 million which she reportedly paid by wire transfer last Tuesday.  A recount began on Thursday which has left the results virtually unchanged.

Since last Monday, Ren Jander, JD, has posted considerable analysis of Stein’s attempts to force a “recount” of votes in Pennsylvania, basing his conclusions on the 1937 code and its subsequent amendments. In posts on Thursday and Friday, respectively, Jander referenced Pennsylvania case law which found election challenges deficient when they were submitted untimely or otherwise outside of compliance with the law.

He further found Stein’s lawsuit, or election “contest,” to be “fraudulent.”  However, “recounts” are reported by CNN to be taking place in Philadelphia, Allegheny and Lehigh Counties which by law are “statutorily time-barred.”

“Unless I see that all of the county recounts, either before the election boards, or courts of common pleas have also been dismissed with prejudice, I intend to follow through tommorow, on exposing everything in my report discussed here earlier today.” [sic]

On Sunday morning, various outlets reported that Stein will file a federal lawsuit against the Commonwealth of Pennsylvania on Monday seeking a “statewide recount” “on constitutional grounds.” The filing may coincide with her declaration of a forthcoming “announcement” to be made in front of Trump Tower at 10:00 a.m. Monday morning.