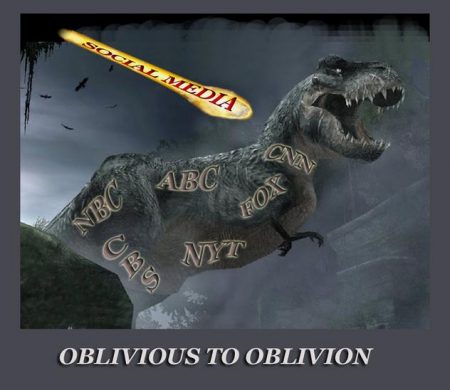 (Dec. 2, 2016) — According to Pew Research, as of September 2014, 64% of Americans got their news from social media sites such as FaceBook, YouTube, and Twitter. It is reasonable to assume that this number increased during the 2016 presidential campaign season. The shift in trusted information resources is troubling to traditional news outlets that previously owned the media market. Organizations such as NPR reveal their well-deserved concern by asking provocative questions such as: “Did Social Media Ruin Election 2016?” Conversely, others would argue that social media saved election 2016. The collusion between the dinosauric mainstream media entities is further evidenced by the coining of their new propaganda term: “Fake News”, representing a joint effort to discredit their competition and preserve their previously unchallenged market share.

The former conspiring monopolies seek to disguise their distress by promulgating claims that the new social media generation is being fed extremely static fake news, and thereby assaults the very essence of democracy by presenting limited points of view.  However, the public has turned to these alternate media outlets in order to seek out true and uncensored news.  While the dinosaurs cry “fake news,” it is their censorship of the news based on anti-American ideologies that have turned the market against them.

Their failure to acknowledge the escalation of their extinction is more of a reflection of their biases than it is a reflection of the “darker side” of social media patrons.  Claims of a lock-step-type of mindset that attract readers embracing similar beliefs is not emblematic of a closed-minded culture that does not entertain other points of view.  It is not uncommon now, nor has it ever been, for people to associate with others that are like-minded.  It is why we join one church over another, or develop a circle of friends with similar interests and habits.  The freedom to do so has always be a foundational principle of Americanism, and not something to be embarrassed about or disparaged.  If Americans are turning to alternate media outlets, it is because they trust these outlets more than the dinosaurs that censor any challenge to their power cabals and bury any news that contradicts their ideologies.

Truthfully, there is nothing new under the sun.  During the time of the American Revolution, much of the mainstream media was loyal to the Crown and could not be trusted to report what was really happening throughout the Colonies – beginning with the Battle of Bunker Hill. This paved the way for publications, such as The Boston Gazette and the Pennsylvania Evening Post, with the latter publishing the Declaration of Independence.  Our Founders also developed Committees of Correspondence, a network of sharing critical news developments and intelligence that facilitated the fight for liberty. Although social media as we enjoy it today would have been totally inconceivable to our 18th century predecessors, the Committees of Correspondence embraced a more personal system of communications that contained aspects similar to today’s IT-based entities. Regardless of the form of communication, communication during the 18th century was just as critical to the cause of freedom as it is in the 21st.  For a people that are ignorant of the power grabs around them are doomed to be ruled by tyrants. Modern patriots understand that just as well as our predecessors.

Beware, America. The cabal-supporting monopolies can be expected to do all within their power to impeach the credibility of those that challenge their power. After the name-calling fails, expect fake news leads to be sprinkled throughout cyberspace in an effort to discredit well-respected challengers. It is more than likely that they will make every attempt to annihilate their competition so that once again they can rule the roost and control America by controlling the narrative.  The good news is that the media cabals that once controlled elections by controlling the media have been outed.  America has closed its ears to their siren’s call of globalism, just as it has ceased to be intimidated by the name-calling politically-correct police.

The election cycle of 2016 has proven to be monumental in its overturning of the politically elite establishment and the election of a not-so-politically-correct candidate. But the revolt will be incomplete if the established dinosaurs that once ruled are allowed to continue nesting in their ivory towers.  America must sustain the revolution for the heart and soul of this country by sustaining the social media sites that brought them the truth.  There was a valid reason why our Founders sought to protect the freedom of the press in the First Amendment to the Constitution.  Without a free press, truth becomes whatever those in control dictate it to be, and tyranny lies in wait. Today we might not rely on paper and ink, but the freedom to speak truth and sound the trumpet when necessary remains a hallmark of liberty that is now rooted in the electronic era. May God bless the champions of truth in America, and may they prevail against our oppressors.