“I DIDN’T WANT TO BE THE STORY”

(Nov. 17, 2016) — In an interview on Wednesday with CNN’s Anderson Cooper, Fox News’s Megyn Kelly, host of “The Kelly File,” said that she interpreted several comments she alleged were made by Trump surrogates and Trump himself during the presidential campaign as “threats” which prompted her to hire a security guard for her family’s protection.

Since initially sparring with now President-elect Donald Trump in the first presidential debate on August 6, 2015 by posing a question to him about his alleged treatment of women over the years, Kelly, 45, has said that she was simply “doing her job” as a journalist.  Her memoir, “Settle for More,” released on Tuesday, includes allegations about her relationship with the Trump campaign and Trump himself; elucidation on her alleged interactions with former Fox News CEO and Chairman Roger Ailes, who has been accused of sexual harassment by a number of women, including Kelly; and relating stories from her childhood, including that she was “bullied,” which she said caused “permanent damage.”

Ailes has denied all of the harassment claims but resigned from Fox in July under a non-compete clause and a $40 million payoff.

Since its publication on Tuesday, virtually every mainstream media outlet has either interviewed Kelly or written about her book, whose preview describes her as “one of today’s best-known journalists, respected by women and men, young and old, Republicans and Democrats.”

After alleging that then-Trump campaign manager Cory Lewandowski assaulted her as Trump made his way out of a ballroom with his security detail in March, former Breitbart writer Michelle Fields said, “I never sought to be part of the story.”

In a column titled “Michelle Fields: In Her Own Words,” Fields claimed that Lewandowski manhandled her and attempted to “throw her to the ground,” although security video released after Lewandowski was charged failed to support the allegation.

Fields said that while posing a question to Trump as he was exiting the ballroom at his resort, Mir-A-Lago, “Trump acknowledged the question, but before he could answer I was jolted backwards. Someone had grabbed me tightly by the arm and yanked me down. I almost fell to the ground, but was able to maintain my balance. Nonetheless, I was shaken.”

The Washington Post’s Ben Terris immediately remarked that it was Trump’s campaign manager, Corey Lewandowski, who aggressively tried to pull me to the ground. I quickly turned around and saw Lewandowski and Trump exiting the building together. No apology. No explanation for why he did this…

and ended her column with:

Many people have been asking me on Twitter and in emails what exactly happened Tuesday night. I hope this article answers those questions and I can get back to reporting the news, not being a part of it.

Kelly almost immediately hosted Fields and then-Breitbart colleague Ben Shapiro on her show to air the allegations.  Shapiro, who with Fields and three others resigned from Breitbart within days of the incident, was not an eyewitness to the event.

The Palm Beach County prosecutor’s office investigated but ultimately chose not to pursue the charge of “simple battery” against Lewandowski. In an interview with Steve Malzberg following the declaration of the prosecutor’s decision, Fields claimed that she had never sought Lewandowski’s prosecution, but rather, simply “an apology.”

When The Post & Email contacted the prosecutor’s spokesman about Fields’s claim made to Malzberg, he simply said, “We wouldn’t have any comment on anything that she says or any interview that she has.”

Fields, once a Fox News contributor on the financial show “Cashin’ In,” is now a writer at The Huffington Post, which was announced by CNN Money on May 22 as “Michelle Fields to resume covering Donald Trump – for Huffington Post.”

[Editor’s Note:  Some readers may find material at The Huffington Post distasteful and/or offensive.]

Trump’s blacklisting of HuffPost is the result of nearly a year of antagonism toward his campaign.

The site has goaded Trump ever since he launched his White House bid last summer, initially taking a dismissive approach. A month after Trump announced his candidacy, HuffPost decided to place all coverage of his campaign in its entertainment section.

The site’s editor-in-chief Arianna Huffington changed the policy in December, saying that Trump’s campaign had become too “ugly and dangerous” to treat as a sideshow.

In January, HuffPost started appending an editor’s note to all stories about Trump, calling him “a serial liar, rampant xenophobe, racist, misogynist and birther.” 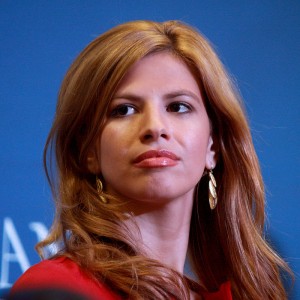 Since late May, Fields has written almost exclusively negative stories about Trump, although she still considers herself a “reporter.”  Traditionally, however, a “reporter” injects no opinion into his or her work in order to allow the reader to make up his or her own mind about the issue at hand, while an editorial writer expresses opinion, usually based on factual events.

In the mainstream media today, opinion often masquerades as fact, and facts are often obscured to influence public opinion, as in the polling conducted prior to the November 8 presidential election.  All earlier this year, “Politico Caucus” strategists, 538’s Nate Silver, and commentator Ben Stein, who supported Hillary Clinton, predicted, among many others, that she would be the next President of the United States.

Early on in the campaign, “HuffPo” characterized Trump as a “misogynist,” “sexist” and “a birther” and has not striven for balance in its reportage of him and other matters.  After Trump was declared the winner in last week’s presidential election, Politico first reported that the derogatory editor’s note affixed to each article about his candidacy would be removed for purposes of beginning “a clean slate.”

A month after interviewing Fields, Kelly tweeted, “Michelle Fields has no credibility at this point,” to which one blogger responded, “Kelly supported Fields and her claims to the hilt.  She gave the young reporter maximum exposure to her top-rated national show, but only until prosecutors determined that her claims of criminal battery were not supported by the evidence and did not warrant prosecution.  Then, with Fields way out on a limb, Kelly sawed it off.  With friends like that, who needs enemies?”

Historically, in political debates, moderators have developed questions which are posed to each candidate in turn rather than specific questions aimed at one particular candidate, which was not how the August 6, 2015 Republican presidential debate began.  At the opening of her interview with Cooper, Kelly discussed the history behind her asking that first question of Trump about his treatment of females, citing several comments he had allegedly made about specific women.

The question was not posed to the other candidates.  “I had a feeling he wouldn’t like it, but I had to do my job,” Kelly told Cooper.

Her interaction with Trump sparked backlash against both Trump and Kelly for which neither apologized.  In discussing the aftermath with Cooper, at 7:45, Kelly said, “I didn’t want to be the story.”

At 3:55 in the interview, Kelly said that Trump’s response to her first debate question, in which he told CNN’s Don Lemon that his perception of Kelly’s demeanor was that “You could see there was blood coming out of her eyes. Blood coming out of her wherever,” caused her to fear for her safety and hire the security guard.

“That just changed everything in the debate,” Kelly said at 3:31.

Kelly also stated that she received death threats, but she did not say from whom, if she knew.

Kelly told Cooper (4:47) that at one point, Trump Organization EVP Michael Cohen had retweeted, “‘Let’s gut her'” “at a time when the threat level was very high.” Cooper then asked if a Fox “executive” had then come to her defense.  Kelly affirmed that Fox News Executive VP Bill Shine had allegedly “called him up and said, ‘You gotta stop this…'”  “He didn’t much care,” Kelly said of Cohen.  She then said that Shine said to Cohen, “Let me put it to you in terms you can understand:  if Megyn Kelly gets killed, it’s not going to help your candidate.”

She said that “some of the tactics” used by Trump surrogates, which apparently included Cohen and Lewandowski, amounted to “threats” against her.  As for Trump, she told Cooper that he told her on the phone, “I almost unleashed my beautiful Twitter against you, and I still may.” (1:32)

On Twitter on Wednesday evening, Cohen responded to Kelly by stating, “I never said that & was the one who resolved the dispute.  All to promote a book!”

Addressing himself to Cooper, CNN’s Brian Stelter and Kelly, he added, “I will not let them use me to promote her book. Not how it happened at all!” and “not about a lawsuit. It’s about truth and she knows she is lying to promote a book. Fox thanked me for my help.”

On Thursday morning, he tweeted:

Last Thursday, Cohen was a guest on CNN with anchor Chris Cuomo in which Cohen defended Trump against accusations of racism and sexism, among other descriptors.

Following the election, left-leaning blogger Erik Wemple of The Washington Post apologized to Cohen for his coverage of an interview between Cohen and CNN’s Brianna Keilar after which Cohen had been ridiculed by multiple left-leaning media and Ben Shapiro’s “Daily Wire” for appearing unaware that Trump allegedly trailed in the polls.  At the time, Cohen had asked, “Says who?” when Keilar insisted that polling for Trump showed him “down.”

Keilar was unable to conceal her derision from her questioning of Cohen.  Shapiro was a #NeverTrump proponent.

In his apology, Wemple wrote, in part:

On Tuesday, a reader of the Erik Wemple Blog emailed us to ask if we’d apologized to Cohen. Truth be told, we’d forgotten about the story altogether. So we Googled a bit, called a number and got Cohen right on the line. Then we apologized for having participated in this arrogant act of groupthink. “I accept your apology and I truly appreciate the call,” said Cohen.

On the substance of the exchange with Keilar, Cohen said he’d known Trump was ahead “all along and that’s what had made me as angry as I was.” Asked whether he’d reached that conclusion based on gut instinct or on data, he said “both.”

Cohen had tweeted a link to Wemple’s column and thanked him for the apology.

While described as a “journalist,” Kelly has been featured in several controversial depictions by mainstream hard-copy publications, the latest of which will be released by The Hollywood Reporter.  Her contract with Fox reportedly expires next summer, and it has been widely-speculated that she will not remain at Fox.

Some believe that Kelly is “auditioning” for a new job.

On April 1 of this year, Kelly stated that Fox News colleague Bill O’Reilly and CNN could have been more supportive of her when she was “bullied” by Trump.  O’Reilly appears to disagree with Kelly’s discussion in her book about Ailes.

In her interview with Cooper, Kelly did not remind the viewers that on April 13, she met with Trump at Trump Tower to “clear the air” in an apparent effort to pave the way for her face-to-face interview of him the following month which was broadcast as a special.

Is Megyn Kelly Another Michelle Fields? added on Thursday, November 17, 2016