“THE WORLD IS LISTENING NOW” 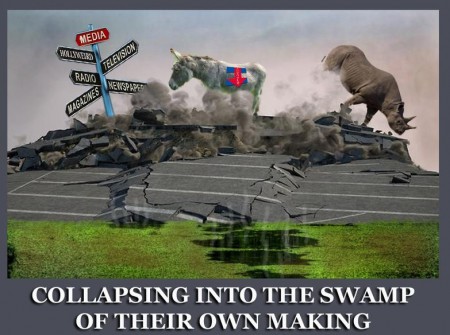 (Nov. 14, 2016) — From the minute Donald J. Trump announced he intended to make America great again, the leaches, the crooks, the embezzlers, the high-living elites and the establishment political leaders felt the earth move under their feet. They understood succinctly the threat he posed to their profane fiefdoms. They understood even more so than many of us who at first gave little credence or confidence to the viability of a Trump campaign.

Though it is not the schema of this article, Trump’s newfound enemies, the aroused hatemongers, the incessant liars, the fabricators, the corrupt and the criminal, by joining the cabal, actually had, contrary to their desires, an effect opposite to what they endeavored to produce.  That is, it awakened American Patriots.  So can we all, in just a small way, thank that cadre of cretinoids for the election of Donald J. Trump?  Yes!  Thank you, you fools.

It was difficult for many American citizens to comprehend the extent of the corruption and control this elitist government had harnessed.  Some have seen it coming, others refused to believe it.  Thirty years ago President-Elect Trump saw it, warned about it and stated very clearly if it continued unabated and no one comes forth to stop it, he would.  They did not listen to him then.  The world is listening now.

The Democratic Party, with the most to lose, was by no means the solo objector of Trump’s agenda. The Republican establishment supplied clandestine and overt assistance, much as they did in their battle to upend the Tea Party movement while the Republican establishment wanted to protect the limited power and booty allowed them by the left. But it was the socialist Democrats who understood that the path to control and power over the people resided in keeping the minorities uneducated and dependent.

With the assistance of the teachers’ unions and advertised government handouts they destroyed the family structure, thereby propagating the inability of the people to be educated, to work and support themselves.  To be sure, a sinister and vile strategy, built upon death, misery and poverty.   Donald Trump has proposed a plan to help them escape that generational servitude.

What they have done in their demonic effort to prevent the draining of the swamp will go down in history as the most vicious, the most vile character assassination American politics has ever seen.  Trump, while defending himself from every quarter, hit back and then it was he who was deemed to have tarnished the heretofore wholesome world of politics.  Singlehandedly at first, he took them on.  The more he succeeded the greater the depth of their fear.  As that concern grew, so, too, did the hatred and the lies.

The league of conspirators relentlessly excavated all the good, compassionate and charitable gardens that were cultivated by Mr. Trump and proceeded to fill that void with revolting, slimy, vomitus swill.  They have created a swamp, a quagmire of hate, an environment of fear, a legacy of destruction, mayhem, injury and death, all in the name of resolute desire to hold onto the bridles of power.

They now must live with that construction. It is their cities and towns which are now under siege, having roads and bridges shut down, businesses financially ruined and buildings destroyed. Once again, and always, it is the uneducated inner city fodder who will feel the brunt of this orchestrated anarchy.

Except for those mercenaries being paid by Soros and the DNC who have been hired to foment and fabricate dissent, none of the masses have a clue as to why they are protesting or what Donald Trump is or stands for. The key to a successful riot is exaggerated threats, fiery rhetoric and ignorant masses of malleable individuals.

If the fabrications, exaggerations and outright lies about Trump were not incessantly broadcast 24/7 by the miserable elites, there would be no protests, no destruction of life and property.   Mark these words: the day will come when these people, the likes of Soros, Sharpton and Jackson, will be exposed, and they and their evil ideology will not escape historical culpability.

It is without contest that the majority of the demonstrators knows any of the real positions and plans of Mr. Trump.  If they did, the number of demonstrators would be limited to just a few paid gunslingers.

These agenda items, as well as the decades of good Donald Trump has done, have been successfully hidden from the majority of the people.  In their place, they instead have created an evil apparition and converted a goodness into a specter of fear.

Even as trillions of dollars have been spent on this deception, the good news is Donald J. Trump will do what he has promised.  In four years everyone will be feeling the effects of a great economy, great education and less dependency on the government, and many will admit it.   The leftists who are at this time pretending to be enjoying this turmoil and resentment which they have fabricated are actually quaking in their respective boots.  They see the channels being dug and sewage pumps being put in place which will eliminate that odoriferous swamp.  Trump will, in eight years, undo the over 50 years of unconstitutional activities which have infected the psyche of our America.

Can we get an Amen and Hallelujah?