Can the Cyclamen be Revived?

“A CHANGE IN DIRECTION” 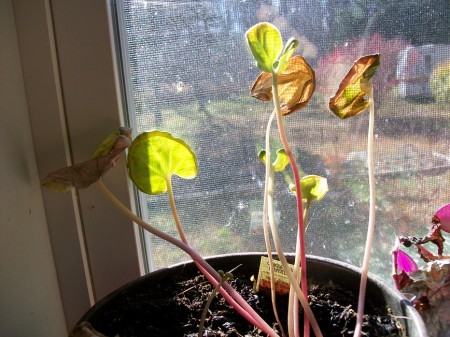 (Nov. 14, 2016) — After years of flourishing with very little care or attention, the cyclamen plant which has been a bright spot in my home and my life may be dying.

Its once-full and plentiful green leaves and delicate scarlet flowers are no more.

While the plant, given to me years ago as a gift, continues to occupy its place on the windowsill, drinking in the abundant sunshine, it began a downward spiral in July, with all of its flowers dying and the leaves inexplicably shriveling.

Despite regular watering, which I used to forgot at times, seemingly nothing will coax it to regain its former glory.

While writing about this resilient plant previously, I discovered that cyclamens often become dormant in the summer and revive over the winter.  During the harshest stormy weather almost three years ago, the cyclamen was ablaze with color.

While the cyclamen withered, its next-door neighbor, the vine, continued to grow all over the window sill, and its more distant neighbor, the gardenia, was rescued from an almost-certain death .

Two weeks ago, I would have said that the cyclamen was finally giving up. In a last-ditch effort, I administered some plant food, something it had never needed before, and added fresh potting soil. I turned it in a different direction on the windowsill.

Still, the once-beautiful leaves continued to dry out and waste away, seemingly unresponsive to my efforts.

Then, about a week ago, I noticed three new stems with tiny leaves opening which seemed to have appeared overnight.  They opened, although they still looked shriveled.  And just touching the older stems this morning caused them to fall limp in my hand.  Despite sunshine and water and good food, it is a perilous time .

Nevertheless, I gave the cyclamen a little more water, noting that the new leaves have opened just a little bit more and seem a little greener as the sunshine continues to stream in the window.

I am reminded that the cyclamen has seen dark times before when it went into dormancy, completely disappearing to the point where I believed it was hopeless and nearly discarded the flower pot.  At the time, I concluded that I had not been a good caretaker, that I had not been vigilant enough.

However, three years ago, at this very same time of year, the cyclamen experienced a miraculous turnaround in just ten days, seemingly finding new strength over a cold, blustery winter.

After the long, hot summer, winter is coming.

As I was returning home this morning, thinking about writing this story, I passed “Hope Road.”

Will “hope” and a “change” in direction be enough to revive the cyclamen? 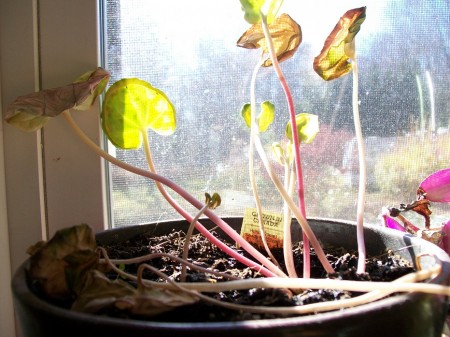 2 Responses to "Can the Cyclamen be Revived?"