“LIKE A CANCER ALL ACROSS THE REST OF THE STATE”

(Nov. 13, 2016) — The Post & Email recently received a letter from an inmate at the Morgan County Correctional Complex (MCCX), reputed by some to be one of the better Tennessee prisons, describing “hands-on training” exercised by correction officers against inmates.

“Brushy Mountain prison” is a now-defunct, formerly maximum-security facility built in 1896 by prison labor.  Prisoners, who were paid nothing, were once laborers in the surrounding coal mines, a practice which coal-miners vehemently opposed and eventually successfully petitioned the legislature to change.

Most of the staff from Brushy Mountain were relocated to MCCX in 2009, when the facility, which once housed James Earl Ray, Dr. Martin Luther King’s assassin, was closed.

Over the last two years, The Post & Email has reported on a number of alleged inmate abuses within Tennessee prisons, including those run by the Nashville-based Corrections Corporation of America (CCA), now known as CoreCivic. We have reported the alleged beating into unconsciousness of West Tennessee State Penitentiary (WTSP) inmate John McCloud; the 2015 intimidation of then-NWCX inmate Walter Francis Fitzpatrick, III for refusing to enroll in a federally-funded drug-and-alcohol treatment program for which he did not qualify; the alleged beatings of Richard A. Mayers, then at WTSP; and the lack of medical attention and virtually omnipresent “lockdown” of minimum-security inmates at the Trousdale Turner Correctional Center (TTCC), opened in January and operated by CoreCivic.

Tennessee Department of Correction (TDOC) Communications Director Neysa Taylor told The Post & Email in an August telephone interview that all of the reports received from inmates and their relatives who had visited TTCC, specifically, are “inaccurate.” In contrast, a former TDOC inmate told The Post & Email, “You can’t believe what anyone at the TDOC says.”

In researching Tennessee law concerning correctional facilities, The Post & Email discovered that a warden is considered responsible for “treating the inmates with humanity and kindness.”

“They use good cover here at Morgan County,” the inmate wrote.  “I had allways heard about the beatings the were deliverd on  a very regular basis [sic]. It was normal rueteen at the old Brushy Mountain prison wich is right across the hill from here.  There is alot of left over gaurds from and of course the old ones train the young ones and that means the official training ‘and’ the unofficial training.”

On page 2, he continued:

Upon arrival Here at Morgan Co. I had hoped that I wouldn’t find out that that [sic] the same kind of mind set existed here that was like a cancer all across the rest of the state, but Im sorry to say that it does allthough I havent had the unfortuneate chance to sample this particular blend of hands on training so to speak.  I have personal spoken to at least a dozen inmates that have had hands on training here at this facility apparantly it has been standard proceedure for so long that its simply done without even thinking about it.  Moreover some of the young C/Os seem to be in some kind of competition, for braging rights as to how many hands on training sessions thay got to participate in.  One particular incident where an inmate was simply cought out of Bounds at wich time he was handcuffed and then punched in the stomach then the C/O said there now were even.  Realy? [sic] 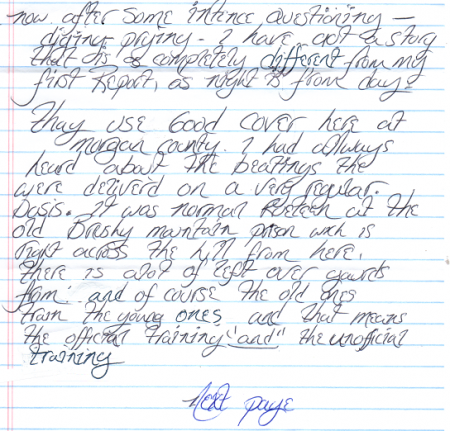 The inmate allegedly punched in the stomach at MCCX subsequently wrote to us, citing Fourth and Eighth-Amendment violations, the former in regard to his arrest and incarceration, and the latter as applied to the alleged actions of the correction officer after the inmate was found to be “out of place” within the prison and on his way to “confinement” as a result.

“On Oct 16 I was caught out of place when I attempted to go into another pod to get some smokes from my buddy,” he wrote.  “Something that’s against prison rules and policy, however, nothing that excessive force required.  The 8th Amnd. of the U.S. Con. protects us against cruel & unusual punishment and that’s exactly what happened as soon as a Corporal at MCCX in Morgan County did to me on the way going to confinement for the out of place write up I was going to receive.  Upon catching me out of place I was threatened by at least 6 officers, 2 sgts. and the Corporal who was the one who actually punched me in the stomach.  MCCX has common practices that involve racial remarks as well as assault and batteries.  It seems like that’s just the way it is up in these mountains, amongst these mountain men who work here.  It’s a constant joke amongst co-workers at the expense of not only the inmates who are doing time for a rezons of crimes, but also the honest tax paying citizens…” [sic] he wrote.