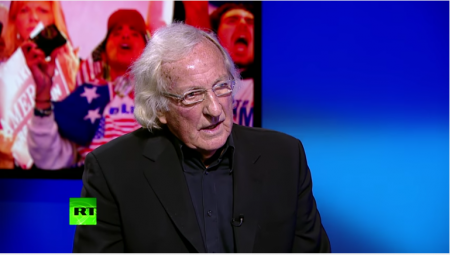 (Nov. 11, 2016) — In an interview titled “Going Underground” with RT’s Afshin Rattansi, British award-winning documentary filmmaker John Pilger provided analysis of the U.S. presidential election in which he called the reportage of many reporters “shameful.”

In the 28-minute face-to-face question-and-answer with Rattansi, Pilger accused the press of writing “black satire” rather than providing accurate coverage of what was actually happening within the American electorate.

Last weekend, Pilger published an interview with WikiLeaks founder Julian Assange, whose releases of Hillary Clinton operatives’ emails both prior to and after the November 8 election showed collusion with major media corporations and a vast degree of political corruption.

Pilger identified “a liberal class” which mandated during the campaign that “only the status quo, only a corrupt, war-mongering status quo, would be acceptable to the majority.”

Given the election of Donald Trump over Hillary Clinton, Pilger said that the “liberal class” is experiencing a “frenzied” reaction.  Of Clinton, he said, “She is the embodiment of a very dangerous, war-mongering system that has declared the world where it can go to war wherever it likes…”

At 6:47, Pilger told Attansi that it made sense that Trump won over a corrupt, “establishment” candidate, to which Attansi posited, “Even elites that are part of that corruption surely need to know facts on the ground,” naming ABC News and CNN as examples.

“They’re not journalists; they’re anti-journalists,” Pilger responded without hesitation.  “One of the most revealing aspects of this has been the exposure of journalism, the exposure of journalism as an extension of that same corrupt established power that I’ve been speaking about.  They’re not independent; they are echo chambers; they amplify and echo that which is handed down to them…”

He said that “the worst” is The New York Times, which he said has “become a Cold War propaganda sheet.”  He also criticized The Guardian, which is a UK publication, for calling out Julian Assange in the event that Clinton were defeated as a result of WikiLeaks’ releases.

Pilger said that ultimately, the “liberal media,” the Republican Party, the Pentagon, and the State Department “were the shouters.”  He included the BBC in that category.  “They were all there because Hillary Clinton represented them,” he said.

Trump campaigned on a platform of focusing on rebuilding America, being “anti-establishment,” and avoiding nation-building overseas.  Pilger noted that it is unknown what Trump will do once he is in office.

“No one really listened to Trump’s narrative,” Pilger observed.  “They saw only this salacious side of Trump, ‘getting’ Trump, in a sense…But now it’s different.  Now they have to go back through all that news footage…’What did that man actually say?  What can we expect?’ Well, they don’t know; they don’t know, and they’re journalists.  Extraordinary, and shameful.”

He did, however, compare Trump’s election to “the Brexit vote” in which a majority of Britons voted to leave the European Union this past June.

At 15:30 in the interview, Pilger said that the United States is not run by the president, but rather, “by a massive national-security machine.”

Pilger opined that the media and “liberal class” have “enabled” the rise of Trump and inaccurately reported what was occurring in Libya and other places in the Middle East to the American people.

He said that arms dealers largely backed Clinton’s candidacy and that as Secretary of State, she “approved arms sales to Saudi Arabia and Qatar, both of which have given in large amounts to the Clinton Foundation.  Saudi Arabia, which is almost the enemy of humanity…these are the friends of the Democratic candidate for president.  Is it any wonder she was beaten?” Pilger asked rhetorically.

In contrast, Pilger contended that Trump’s campaign was opposed by the U.S. military “establishment” because Trump had questioned the U.S.’s participation in NATO and removed the “shipment of arms” to NATO from the Republican platform.  “So all kinds of bells must have rung,” Pilger speculated.

“He wasn’t doing as he was told,” Pilger said of Trump, stating that an analysis of “how it got to this” is important.

He decried bankers who “bankrupted” U.S. citizens during the recession which began in late 2007 as well as government agents who initiated wars.  He again faulted the media for “beating drums for the invasion of a country – Iraq – in which probably a million people were killed.”  Additionally, Pilger claimed that the media’s “silence” and “collusion” as shown in the published WikiLeaks emails “exemplify the very corruption” he mentioned earlier in the interview. “When you have the campaign manager for a candidate for president of the United States is an officially registered agent of Saudi Arabia, and that Saudi Arabia and Qatar are funding the Clinton Foundation, and Clinton, as Secretary of State, is approving arms sales, including the biggest arms sales in history, to Saudi Arabia and Qatar…”