ALLEGED SOURCE:  “WE’RE PREPARING FOR MANY ARRESTS FROM THE TOP DOWN” 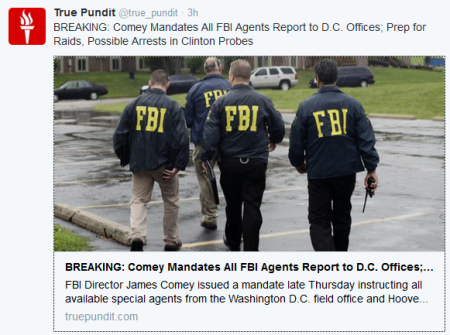 (Nov. 4, 2016) — The website TruePundit, whose owners pride themselves on complete accuracy, reported on Twitter and online that FBI Director James Comey has “mandated all FBI agents [to] report to D.C. Offices.  Prep for Raids.  Possible Arrests in Clinton Probes.”

It is believed by this writer that the website’s operators are former US intelligence officials with inside sources unavailable to most media.

In an article published on Friday morning, TruePundit quoted an FBI source as having said, “we are preparing for many arrests from the top down.  I cannot elaborate beyond that.”

Prior to the release of 28 batches of emails involving Hillary Clinton campaign chairman John Podesta beginning on October 7, TruePundit correctly predicted that at least one of the emails which show that Clinton suggested killing Wikileaks founder Julian Assange with a drone in a national security meeting held on November 23, 2010 with Obama and national security personnel in attendance.

In a subsequent tweet, TruePundit wrote, “We have not been wrong yet. Wait & see.” 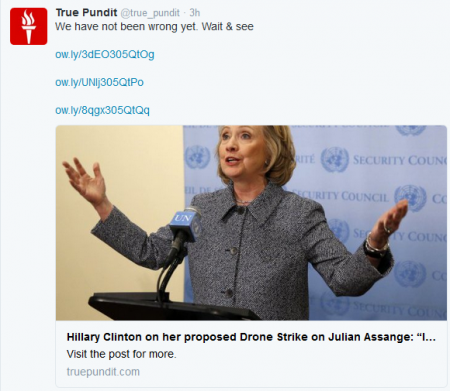 On September 25, TruePundit issued a highly-detailed report quoting anonymous FBI sources as having come to the conclusion that they were “used” “as pawns to insulate Hillary, aides & Clinton Foundation from prosecutions” during their year-long investigation of Hillary Clinton’s use of a private server to conduct government business.  WikiLeaks release #27 posted on Thursday reveals that Clinton operatives admitted that, contrary to Clinton’s claim of having released all of her emails relevant to her tenure as Secretary of State, there were “definitely” some withheld from the State Department and therefore the American people.

On Wednesday, TruePundit reported that the New York City Police Department (NYPD) has gathered evidence from a laptop computer belonging to the estranged husband of top Clinton aide Huma Abedin with enough evidence to send people to prison, with Clinton, some of her aides and several past and present members of Congress reportedly implicated.

In that report, TruePundit wrote:

New revelations from newly-recovered Clinton emails, according to law enforcement sources, implicate the Democratic presidential candidate, her subordinates, and even select elected officials in far more alleged serious crimes than mishandling classified and top secret emails, sources said. NYPD sources linked to the probe said these new emails include evidence linking Clinton herself and associates to: