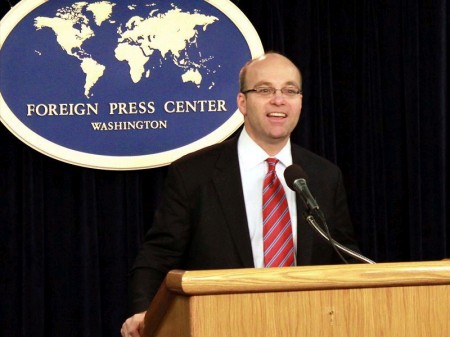 (Nov. 3, 2016) — In an email dated October 31, 2008, Jennifer Palmieri, then of the Center for American Progress (CAP) founded by John Podesta, wrote to Podesta that then-Politico reporter Mike Allen had supplied a list of individuals who he had reason to believe would be nominated for cabinet posts in an Obama White House.

Palmieri later became Obama’s communications director and special assistant, resigning her post in February 2015 to work on the Clinton campaign.

In what was considered a “shakeup” at the decade-old online publication in January of this year, Allen, several officers and Politico co-founder Jim VandeHei left the organization.  It is unclear where Allen is presently.

Rather than Special Advisor to the President, Valerie Jarrett was reportedly floated as Secretary of Housing and Urban Development on the list provided by Allen.  Then-Kansas Gov. Kathleen Sebelius was under consideration for Education Secretary but instead served as Secretary of the U.S. Department of Health and Human Services during Obama’s first term.

Susan Rice was identified as a potential United Nations ambassador, a post in which she served until 2013, when she became National Security Advisor.  Others, such as former New Mexico Gov. Bill Richardson and Sen. Jack Reed of Rhode Island, did not ultimately work in the Obama White House.

The list reveals that Hillary Clinton was under consideration for Defense Secretary and Podesta for Attorney General.  Eric Holder served as Obama’s first Attorney General, and Loretta Lynch now heads the Justice Department.

According to Wikipedia, Allen had “frequent correspondence with White House communications director Dan Pfeiffer,” who vouched for the authenticity of the image posted on the White House website on April 27, 2011 said to be a PDF of Obama’s long-form birth certificate but later declared a forgery by a criminal investigation commissioned by Maricopa County, AZ Sheriff Joseph Arpaio.

Allen also had a history with The New York Times and Washington Post, both left-leaning publications.

Palmieri had marked the email to Podesta “confidential.”