WHO WILL TAKE THE OATH OF OFFICE IN JANUARY? 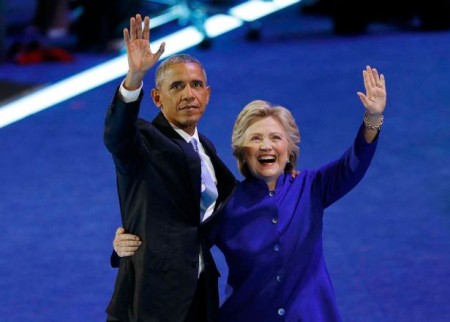 (Nov. 2, 2016) — There are – to vastly understate the matter – stark differences between the candidates now vying to be the Nation’s next president.  They say that a picture is worth a thousand words, which brings to mind one of your faithful servant’s favorite political cartoonists, Michael Ramirez.  He recently captured perfectly the sentiments of a vast majority of the voters, excluding the ideologues from both ends of the spectrum.  Since the image might not transfer properly here, simply search here for the Ramirez artwork for Tuesday, October 25, 2016, captioned “American Roulette.”

Pictured are two six-shooter revolvers, each with the cartridge carriages exposed.   One revolver, labeled “Trump,” shows bullets in three chambers, with the other three empty.  The other one, labeled “Clinton” (hereinafter “HRC”), shows bullets loaded in all six chambers.  Between and below the two revolvers named “Trump” and “Clinton,” Ramirez writes: “The Choice.”  Or, as Dirty Harry once said: “Do you feel lucky… punk?”  Only here, we are not dealing with punks.  We are dealing with voters.

Let us agree that Donald Trump is not Ronald Reagan.  A president like Reagan comes along only once in several generations.  Many consider Trump to be rude, crude and oh-so “un-presidential.”  Yet these are the same folks who never blinked in electing a usurper to the office, and not once, but twice.  Yes, Trump may have many flaws, but so did many others who have held the office.  And it is clear that he sincerely loves this country and, to boot, can lay legitimate claim – unlike the current squatter at 1600 Pennsylvania Avenue – to being a natural born citizen.

But not all natural born citizens should be elected president.  The constitutional requirements of Article 2, Section 1, Clause 5 that one must be a natural born citizen is an articulation of eligibility, not “qualifications.”  One can be eminently “qualified” to serve as president – e.g., Ted Cruz, Marco Rubio, et al. – and yet still be ineligible.

But in this cycle, even though Mr. Trump’s opposition is presumptively a natural born citizen, she is utterly, completely, totally, absolutely, irredeemably and (here, faithful P&E reader, fill in ______________ your own favorite pejorative adverb) unqualified and unfit to hold the office.  Period.

Her entire campaign – indeed, her adult career – has been built on lies, fabrications and deflection of responsibility.  Oh… and loss of memory.  They say that selective amnesia is the best defense against indictment.  HRC has polished and elevated that mental malady to an art form.  And yet, even artists can be indicted on circumstantial and/or independent evidence, especially if there is a new attorney general with the surname “Giuliani.”  Or “Cruz.”  Or “Gowdy.”  No wonder speculation circulates even now for the potential that The Usurper at 1600 might pardon her if she loses next week.

Her conduct with regard to her private e-mail server and the cavalier fashion in which she handled and sanctioned through surrogates and operatives the destruction of evidence relating to the nation’s most closely-guarded secrets – all while under congressional subpoena, no less – not only disqualifies her from being commander-in-chief; more importantly, it demonstrates the haughty insouciance and Marie Antoinette-like contempt she has for the Republic itself and its populace.  Her hypocrisies and connivances are coming back to roost…, and not a moment too soon.

Stated otherwise, and to limit an otherwise novel-length diatribe, it is submitted that while Mr. Trump may not be the ideal candidate for president, HRC is quite possibly the worst candidate that the Democratic Party has ever coughed up in its never-ending quest to ooze the tentacles of government across the land and into the lives of everyone in the United States… except, of course, un-vetted “refugees” and illegal aliens in “sanctuary” cities.  Thanks, Democrats… for nothing.

Looking down, one has to wonder: what are Christopher Stevens, Sean Smith, Glen Doherty and Tyrone Woods thinking?  And who do you think they would vote for?  Here’s a thought: if you want to see a “vile video,” just wait until the image of HRC – flanked by The Usurper, Slick Willie and Huma Abedin… and perhaps even George Soros and Bill Ayers – pops up on your TV, iPad or mobile device showing them smiling on the west steps of the Capitol, preparing to take the oath of office.

That would be a vile video to end all vile videos.  Vote carefully next week.

A Vile Video to End All Vile Videos added on Wednesday, November 2, 2016