RESULTS OF “FRESH INVESTIGATION” SOON TO BE RELEASED 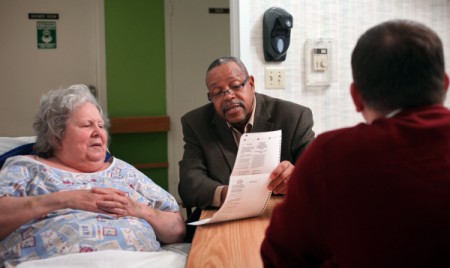 According to Illinois laws, nursing homes must request to conduct nursing home voting.  Residents of these homes who wish to vote using this method, request a mail-in paper absentee ballot.  Each election jurisdiction must assign at least 1 Republican and 1 Democrat election judge to oversee each nursing home resident who votes at the nursing home.

It is important to note that not all senior centers have a nursing home facility.  Also, some senior centers also are polling places for other types of voting including early voting and Election Day voting.  Nursing home voting is used by residents who cannot vote on their own or simply prefer to vote this way.

Generally, residents are brought by nursing home staff to a large room that is designated as a voting area. Two bi-partisan election judges oversee the vote.  The resident can ask for an election judge, caregiver, friend, or family member to assist in marking the ballot. Anyone that assists the voter, must also sign the ballot’s outside envelope. This voting must be supervised by the bi-partisan election judges.  Bed-side voting is permitted for residents who cannot go to the designated voting area.  A Republican and Democrat election judge must be present at the bed-side while the resident votes.  Poll watchers may observe from outside the room.

Investigations in 2012 in both Chicago and Suburban Cook County found that 77% of the homes were not staffed according to the legal requirements. The greatest problem was the lack of bi-partisan judge teams. Most of the homes only had 1 political party overseeing the vote. We found some election judges who stored voted ballots in their cars. As a result of our investigation, changes were made including much better attention to the proper assignment of the election judges.

We will report on the results as we get closer to the election and the data is in.  Already 20 of the 110 election jurisdictions have responded. I expect we should have updates by next week.

Poll watchers are needed to help secure these votes.  More information to come!