I’M NOT QUITE SURE ABOUT THAT 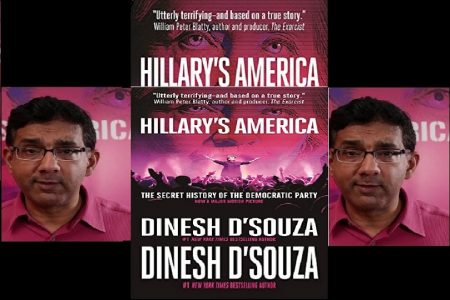 (Oct. 19, 2016) — REVIEW – “HILLARY’S AMERICA” – Dinesh D’Souza — I rented Hillary’s America and watched it last night. My biggest disappointment of the movie came in the statement “Because of my conviction I can’t vote but you can.” 1 in 5 Americans are incarcerated, on parole or probation and if you are [not currently incarcerated] your vote is protected by the 15th Amendment.

A record number of U.S. citizens — nearly 6 million — will sit out the upcoming presidential election because they are incarcerated, on parole or probation, or are ex-felons.

It appeared to me throughout the movie that Dinesh D’Souza simply bought the smoke both Democrats and Republicans have been selling rather than standing up and reading the Constitution. One would think, now he is “one” of those who has been labeled with a past criminal record, that he would be taking a deeper look into the actual Supreme Law of the Land?
VIDEO should cost HILLARY CLINTON the Black Vote– “They must be brought to heel”
https://www.youtube.com/watch?v=8k4nmRZx9nc
See the video and read the rest here.