“ACTIONS WILL HAVE CONSEQUENCES” 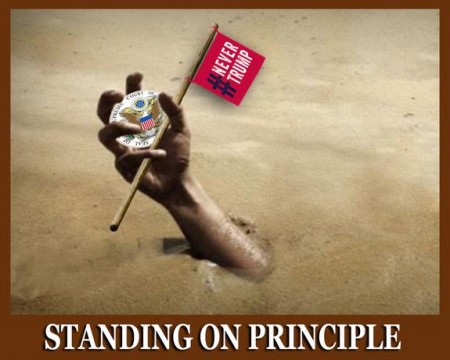 (Oct. 14, 2016) — The hypocrisy of the left is legendary but it is often eclipsed by the sanctimony of the right.  Donald Trump’s latest verbal faux pas and the reactions it inspired is the case in point.  As vulgar and crass as it might have been, the man apologized – over and over again.  However, his apology seems to have fallen on deaf ears for the media and the mutinous Republicans in leadership. The outrage of Hillary’s calling nearly half the country a basket of deplorables pales in comparison.  For the media who bears the responsibility of being the nation’s watchdog, the former Secretary of State labeling the citizens who she wants to represent as unredeemable deplorables is inexcusable; for the Republicans in leadership who portend to represent the Republican Platform and their enablers, their true sanctimonious establishment colors have been revealed. Perhaps the latter’s reaction is vindication for those leaving the Republican Party who have long believed that the Party of Lincoln died ages ago. The fact that it has been replaced with its own basket of deplorables becomes harder to deny with each passing day.  To verify this statement, one needs to look no further than the so-called Republican Speaker of the House and his enablers, the Never-Trumpers.

The questions asked at the last debate and the pundits’ commentaries since indicate that Mr. Trump’s language must be far more objectionable to the media and the so-called Republicans than the issues that will negatively affect our daily lives, i.e., the appointment of possibly three Supreme Court Justices, the annihilation of our Second Amendment rights, the decimation of our borders, and the “deplorable” treatment of our vets and those who risk their lives to protect ours.  These holier-than-thou personalities use every opportunity to hammer The Donald mercilessly as if he personally and violently assaulted them or a member of their family. Perhaps in reality he has. His rising political star has cast its light on the career aspirations of many RINOs and their streams of financial support that eclipse any desire they may have to do  the right thing for America.

Anderson Cooper’s attempt to label Trump’s crass language as sexual assault is a prime example of media bias.  In his hot microphone quote, Trump stated:  “I’m automatically attracted to beautiful women — I just start kissing them, it’s like a magnet. Just kiss. I don’t even wait. And when you’re a star, they let you do it…”  The quote went on, but the important thing to consider is that he said “they let you do it…”  This is indicative of mutual consent, not sexual assault.  Besides, Trump is right – just ask Tiger Woods or any other popular athlete or celebrity personality. Impressionable women fall at their feet. Regrettably, there are many women who simply “let them do it,” such as Monica Lewinsky. Then, when the incidents are revealed to the public, the women walk away and are treated as innocent victims.  There’s an old saying:  “It takes two to tango,” and I’ll add that it also takes two to do a variety of other things.

But there is more to explore concerning men of celebrity and the women who cross their paths and whether or not any concerned mother can consider them role models –  especially when the womanizer occupies or wants to occupy the Oval office.  Hillary Clinton certainly made an issue of that – which is the height of hypocrisy, since the enabling of her husband’s immorality makes her his accomplice, therefore making her a partner in his crimes. As for me, I am of the opinion that the crass-speaking and apologetic Donald Trump is less culpable morally than the dastardly duo that formerly occupied the People’s House. Furthermore, those who embrace Hillary’s concerns should be more concerned about young interns if her husband once again had access to the Oval Office and a box of cigars than locker room-type banter.  Bill Clinton did more than talk; he took action, even when that action was not consensual – and his wife enabled him.  And that, my dear American, is more than offensive; it is criminal – and it constitutes the very essence of sexual abuse.

Unfortunately, there is a third component to the unfolding political disaster that hides beneath the cloak of the RINO elitists.  They are the Never-Trumpers, many of whom I once called “friend.”  Their holier-than-thou attitude may fool some – themselves included – but they are out-of-step with the real world.  In the real world, they are those who strain gnats and swallow camels.  These sanctimonious non-voters may well be responsible for unraveling the threads of Republicanism that still exist.  While their outrage is on display for all to see, it is highly doubtful that the glass houses they live in would survive the scrutiny of having every word they ever spoke in private broadcast for the entire world to see.  They believe they are standing on principle when in reality they are standing in quicksand. Their mantra may be that in voting for the lesser of two evils, you still get evil.  The reality is that by not voting for the lesser of two evils, you get the greater of two evils – a reality that will curse us all.

In conclusion, I must say that I agree that language can be offensive.  However, I also believe that the reality of action and inaction can be worse. And whether it be the media’s enabling of an incompetent and vindictive former Secretary of State, the mutiny of the RINO elitists and their enabling Never-Trumpers, these actions not only speak louder than their words – but worse, these actions will have consequences in the real world that many of us live in.  For it is possible that this nation can survive words spoken carelessly, but it is unlikely we can survive another Clinton administration supported by a feckless Congress and those that enable both of them.