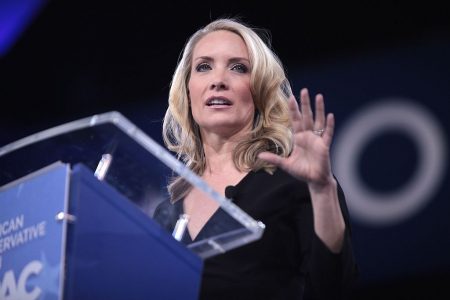 (Oct. 14, 2016) — On Fox News Channel’s Friday edition of “The Five,” co-host and former George W. Bush Press Secretary Dana Perino expressed disgust at Republican presidential candidate Donald Trump for defending himself against a number of accusations from women over the last 48 hours that he inappropriately touched them between 1981 and 2007, depending on the claim.

Through the primary and general election campaigns, Perino has made no effort to hide her dislike of Trump. While “The Five” is an opinion-driven program, Perino appears to have forgotten a basic tenet of the constitutional Republic’s: that a person is presumed “innocent until proven guilty” of a crime in a court of law.

The concept of “due process of law” emanates from the 1215 Magna Carta and was included by the Framers in the Fifth Amendment to the Bill of Rights in the form of a grand jury to review evidence before a citizen can be charged with a crime.

In modern times, juries are instructed as to the presence in their minds, after hearing all of the evidence, of “reasonable doubt” as to the accused’s guilt or innocence.

None of the women who alleged harassment and/or abuse on Trump’s part has filed a civil or criminal case against him to the public’s knowledge. An allegation stemming from the early 1980s by Jessica Leeds, whose story was featured in The New York Times on Wednesday evening, has generated an alleged eyewitness, Briton Anthony Gilberthorpe, as having come forward to tell CNN on Friday, as reported in The New York Post, that the incident never happened.

In one part of her interview with The Times, Leeds appears to imply that a certain form of physical contact would have been consensual on her part, while another was off-limits, at least to her.

Charles C. Johnson of GotNews.com has presented details which he believes cast doubt on Leeds’s and the other women‘s claims against Trump.

At a rally in North Carolina on Friday, Trump said the harassment claims are “a total setup” perpetrated by “phony accusers.”  Trump invoked the name of “Carlos Slim,” a Mexican billionaire who reportedly has given between $250,000 to $500,000 to the Clinton Foundation.

Throughout the campaign, Trump has also stated that the electoral system is “rigged” by “the establishment” and of what he says is Hillary Clinton’s favoring of “globalism over Americanism.”  On Thursday, he told West Palm Beach, FL rally attendees, in part:

It’s a global power structure that is responsible for the economic decisions that have robbed our working class, stripped our country of its wealth, and put that money into the pockets of a handful of large corporations and political entities. For them it’s a war, and for them nothing at all is out of bounds. This is a struggle for the survival of our nation, believe me. And this will be our last chance to save it on November 8 — remember that.

Perino dismissed Trump’s statements as a waste of campaign time, claiming that he should focus on “the issues” and not the accusations hurled at him over the last three days, including two more on Friday.

For months, co-host Greg Gutfeld has made no secret that he dislikes Trump.  After Gutfeld invoked the image of a steam-cleaner rolling over the U.S. to sanitize its political system, co-host Kimberly Guilfoyle made an off-color joke about the routine use of such a machine in a “frat house.”

Only Eric Bolling asked his fellow co-hosts whether or not “we should wait until we get a little more evidence…” in regard to the women’s allegations, after which the conversation turned to Guilfoyle’s having become stuck in a freight elevator earlier that day, causing her undue stress.

Over the last week, co-host one Williams has also made unsubstantiated statements which include his claim that “the Russians have tried to hack into our electoral system” and that Trump initiated a business transaction involving a steel purchase without evidence.  “I think he made that deal,” Williams said.

In her criticism of Trump, Perino inevitably referred to an audio-recording released by The Washington Post last Friday depicting Trump and entertainment reporter Billy Bush exchanging what Trump later said was “locker-room talk,” to which Perino connected the now 7-8 allegations made this week against the billionaire businessman-turned-politicians. “Now this story is completely into the pop-culture world,” she said.

Juan Williams, a Hillary Clinton supporter, decried the fact that Trump is allegedly “at war with the party, and it’s incredible.” However, many “party” members immediately abandoned Trump once the recording was released last week in a seemingly knee-jerk reaction.

“Blaming The New York Times and all these things, Carlos Slim, is a distraction,” Perino then said of Trump.  “You can’t just talk about all of your accusers and insult them.”  Obviously frustrated, she said, “the Republican men that are defending this are really irritating me.  I’ve felt like Mt. Vesuvius all day.  You know who you are, Ben Carson,” she punctuated.  “Women should be seen and not heard,” she further mused of the men’s attitudes and thinking.

“Over time, they’ll all be litigated,” Bolling said of the women’s allegations, turning the conversation to the possibility of nuclear confrontations in the Middle East and the Wikileaks releases of Hillary Clinton and her aides’ emails, although not discussing their substance in depth.

Trump’s attorney, Marc E. Kasowitz, threatened The New York Times with a defamation lawsuit by sending a letter Wednesday demanding a retraction and apology. On Thursday, Perino predicted, without evidence, that the lawsuit would “never happen” because “discovery” would then be required.  “The other thing that’s happened is they put themselves to some — in a box, because they are questioning the victims, which is exactly what they have complained that the Hillary Clinton people did back in the Bill Clinton days of questioning the victims,” Perino said.

Perino did not say “alleged victims” nor mention that if Trump’s “victims” are lying, there could be basis for a defamation lawsuit.

On Thursday night, Liberty University President Jerry Falwell, Jr., an early Trump supporter, told CNN that in a conversation he had with Trump, the Republican presidential nominee revealed that he has documentary evidence that the women who at that point had accused him of harassment “are lying.”

None of the show’s cohosts mentioned that on Friday morning, Trump’s running mate, Indiana Gov. Mike Pence, promised to “provide proof” by the end of the day that the women’s allegations “are false,” perhaps referring to Gilberthorpe’s statements to CNN.

Thro,ughout the now-17-month presidential campaign cycle, Trump has decried a biased media which he said has actively promoted Democrats and more recently, Hillary Clinton after she became the nominee. During her criticism of Trump, Perino opined that he should focus on the Wikileaks emails released over the last week, some of which arguably show communication between a bevy of mainstream media outlets and Clinton campaign operatives as well as the U.S. Department of Justice and the White House on certain matters.

“The Five” did not discuss in depth the contents of the released emails, including that Clinton campaign chairman John Podesta had requested that the White House invoke executive privilege over emails exchanged between Obama, using a pseudonym, and Clinton which could be a “smoking gun” relating to the September 11, 2012 terrorist attack on the US compound in Benghazi, Libya which killed four Americans.

Perino’s presentation of opinion without evidence is yet another example of the mainstream media’s abandoning of its First Amendment duty:  to be a watchdog on government and present the facts, not emotionally-charged, childish rhetoric.

Does Fox News Have Any Credibility Left? added on Friday, October 14, 2016

3 Responses to "Does Fox News Have Any Credibility Left?"