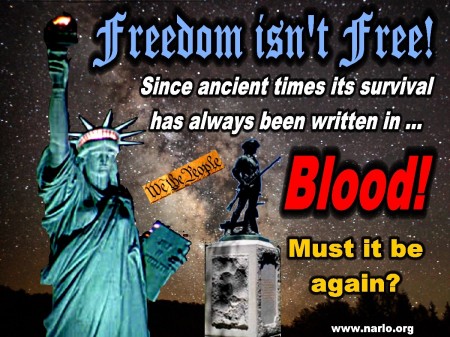 (Oct. 9, 2016) — Since the days of the Indus Valley, Babylonians and Mesopotamia over 5,000 years ago, people have struggled to be free from control of the ruling classes.  But those who rule have most always had the weapons and resources to keep the masses from exercising their God-given rights to live free.

The Sumerian priests (5th to the 3rd millennia BC) forced the people to bring their grain crops to the church.  The priests then distributed the grain to whomever they decide to, on whatever their whim was at the time.  Most often the farmers of the grain were not the first to receive the grain they grew.

Stalin starved as many as 7,500,000 Ukrainians by taking away their food by force of arms, in what became known as the Ukraine terror famine of 1930 to 1933.   He isn’t the first leader to kill millions of his own people.  Mao’s Great Leap Forward killed 45 million people in four years.  Mao Zedong, founder of the People’s Republic of China, qualifies as the greatest mass murderer in world history, said an expert who had unprecedented access to official Communist Party archives.  Hitler’s toll of dead is much more than the 6 million Jews he killed in the death camps of Auschwitz-Birkenau, Belzec, Chelmno, Majdanek, Sobibor, and Treblinka.

This pressure by the masses to be free and the rise of world conquerors, has led to the most brutal and vicious wars in all of human history, until the Twentieth Century when brutality and savagery reached its peak with always growing weapons of mass destruction.  The truth is, the birth and ultimate survival of freedom has always been written in blood.

We are going to cut to the chase in this article.  America has reached a point where the usual means of seeking redress from government under the Constitution or the law, have become largely ineffective.  To move America towards freedom by voting each election cycle, when over half the population can vote to maintain their lifestyle on the backs of the taxpayer, has become a virtual impossibility.  To change our political system by the usual political processes, a system that has evolved into corruption, nepotism and crony capitalism, is a mirage that no one person or group can reach, no matter how hard they try.  Those people who long to be free are stuck in the ever-deepening quicksand of government-sponsored collectivism, multi-culturalism, one-world-government, political correctness, corruption, socialist indoctrination and propaganda and outright lies.

For the last 4 to 5 decades, attempts by thousands of well-meaning patriot individuals and groups to organize and coordinate a peaceful force to counteract the rise of Progressivism and socialism, have fallen into the wastebasket of forgotten dreams.  The more they try, the more ineffective they become.  Their efforts are always short of funds and short of committed bodies.  Most of them fade away after running out of money with barely enough to keep the lights on.  We know a man that has been trying since 1998 to lead a national organization to confront government tyranny.  His ideas were sound and workable but he’s now in his mid-eighties and his efforts have been fruitless.  To his endless frustration, very few were or are listening.

America is no longer a Constitutional Republic.  It has become a loose Democracy, ruled by a mob of people who demand the government to support them and this mob can vote to maintain that support.  So at the risk of being insolent, we are going to tell you how to save America, even though very few will listen or even act on the information.  Each of the ways we describe would take huge sums of money for the specific efforts and an army (well over 1,000,000 for two of those methods) of “dedicated” people, both being in very short supply in America today.  Oh, the bodies are there, just not the dedication and the commitment to be free.  Most Americans don’t even think there is a problem.

The first way is to use the courts, even though the courts are corrupt.  There are still enough teeth in the Constitution and the law that a concentrated legal effort would yield positive results.  It can be done because the other side has been doing it for years.  If you don’t believe us, just ask the legal firms representing the hundreds of environmental groups who have filed lawsuit after lawsuit against the government and not only have taken in a bank vault full of money from the taxpayer, but have actually changed the law in their favor, to the detriment of a whole range of the people’s constitutional rights.  It seems that environmentally brainwashed people and well-heeled capitalists will donate to environmental issues in the hundreds of millions of dollars, but very few will donate to those groups trying to defend and preserve freedom.  Environmental issues have been drummed down the people’s throats for so long by an avalanche of never-ending, unprecedented propaganda, like man-caused global warming, the brainwashed masses bunch up like sheep when the environmentalists make the money call.

The other side (the enemy of a free America) is dedicated, committed, driven, well-funded and the darling of most politicians, the media and academia.  Our side is divided, fractured, fragmented, ineffective and perpetually broke.  The other side wins all the time.  Is it any wonder that our side keeps losing?

However, if all the millions of people who talk about or even write about freedom and long for its return would donate just $10.00 per month to an organization whose sole purpose was to challenge every law that is unconstitutional, the return to freedom could happen in as little as a decade.  Sadly, so many in the legal profession that would lead this charge are in the camp of the enemy.  But lawyers are like prostitutes.  Give them enough money and they will sue their own mothers.

Unfortunately, there is no large organization in which to funnel money to make the Court Method work, much less the millions of Americans who would donate $10.00 per month to the effort.

The second way involves a well-regulated militia, a way that is written in the document that gave birth to American freedom, the Declaration of Independence and codified into law in the Second Amendment to the Constitution.  Note that in the Second Amendment, the term “being necessary to the security of a free State.”  This phrase in the Second Amendment was not an accident.  Its inclusion was based on the concept that only the people can assure that a government does not evolve into tyranny and can rise up, in violence, to stop it.  But if the states or the federal government control the Militia, how, then, is a Militia able to protect the “security of a free state?”  That security must be left to a national Militia, organized outside of state or federal control.

The original idea of the militia was an armed force of civilian men to preserve freedom and take on our foreign enemies.  A well-led, well-funded, well-armed and well-trained militia of dedicated and mature men with an army of about 300,000 strong could restore most of America’s freedoms in as little as a year.  We have provided the details of the MILITIA METHOD on our website, together with a list of constitutional demands that are an integral part of this method.

Whether this method is implemented or not, it will eventually come to a head when the U. S. Military or the National Guard are forced to confront a growing and heavily-armed, organized militia presence in America.  The militia is there; it just isn’t organized on a national scale.

But there are no strong leaders to lead a national militia of this size right now and there is no money to fund the militia’s efforts.

THE DECLARATION OF OPEN RESISTANCE METHOD:

The “Open Resistance” Method would probably yield the best results for the least amount of money and is doable from a funding standpoint and from the available number of bodies who would take a stand to declare open, peaceful resistance against government.  We explained that method in our last two articles but the response to those articles was almost non-existent.  There were three responses out of the thousands who read those articles.

So you see, ladies and gentlemen, as it stands right now, there is no viable solution to saving America by those who claim they want to be free from government tyranny.  There are no leaders, there is no money and there is no organization large enough, nor is there the will of a sufficient number of people.  The organizations that do exist who purport to want to save America are too little, too late and essentially impotent.  The other side has all the votes and our side is a distinct minority with no direction, no leadership, no organization and no money.  Anyone who believes that Trump can save America, even though he may try, is living in Alice in Wonderland; that is, if he can even be elected president.

Perhaps Americans will just wait until they are all under the “gun” and in chains, where there is no chance for freedom and the only solution is revolution.  Would Americans want to live like the people of Venezuela, or any number of Central and South American countries, because, make no mistake, that is where America is headed?

You can’t fight an enemy with no leadership, no men, no weapons and no money.  You might just as well run and hide, and that’s what most Americans are doing right now.  They talk a big game, but they don’t have the will or the courage to fight.  Evidently, government tyranny isn’t quite bad enough yet, but it will get bad enough.  What will the people do when they are under the “gun” or in chains, or both?  Will they fight, or will they, like cattle, just put their hands up and get in the railroad cars?

After eleven years of writing a weekly column and trying to encourage people to get involved in saving their country, the question always lingers in the back of our minds.  If no one is going to do anything, why, then, should we write articles hoping they will?  Isn’t that Einstein’s definition of insanity?  We have the energy, the commitment, the experience, the knowledge and the courage to lead, but what’s the point if there is no one who will join us?

Ron Ewart, a nationally known author and speaker on freedom and property rights issues and author of this weekly column, “In Defense of Rural America,” is the president of the National Association of Rural Landowners (NARLO) (www.narlo.org), a non-profit corporation headquartered in Washington State, an advocate and consultant for urban and rural landowners.  He can be reached for comment at mailto:info@narlo.org.