LIVE STREAMING TO BE PROVIDED

(Oct. 3, 2016) — According to a tweet issued by Wikileaks early on Monday afternoon, founder Julian Assange will be giving a press conference from Berlin beginning at 4:00 AM EDT/10:00 a.m. Berlin time.

Assange had originally planned to make an announcement from the balcony at the Ecuadorian Embassy located in London, where he is been living in exile for the past five years after Sweden issued a warrant for his arrest.

His plans changed, reportedly on Friday, after information related to “security” was identified.  Many news outlets reported that Assange’s announcement was “canceled” without reflecting that one of the original sources of the story, NBC News producer Jesse Rodriguez, had tweeted on Sunday that the information would be released via video link from Berlin, where Assange will be attending the commemoration of his “open-government” organization’s tenth anniversary.

According to seasoned political strategist Roger Stone, a mutual acquaintance of both of Assange and Stone has relayed that Wikileaks has acquired “all” of Democrat presidential nominee Hillary Clinton’s emails deleted from her private server which Clinton claimed were personal in nature.

In March of last year, The New New York Times revealed that Clinton had used a private, non-governmental email server to communicate with aides and those outside of government, in some instances, after which the FBI confirmed in the course of its own investigation that classified and highly sensitive material had been sent through Clinton’s insecure channels.

Speculation as to the information contained in any emails which might be released has percolated on the Internet since the planned announcement first became public on Friday.

Over the past six months, Wikileaks has released more than 30,000 emails from Clinton’s “private email server while she was Secretary of State.”  Also released were hacked emails from the Democrat National Committee (DNC) which showed that Clinton was given preference by party operatives over rival Bernie Sanders.

Wikileaks tweeted a report from The Washington Examiner stating that Clinton campaign manager Robby Mook “declined Monday to comment on recent reports alleging the Democratic nominee once suggested sending a drone strike after WikiLeaks founder Julian Assange,” as was reported by TruePundit on Sunday. 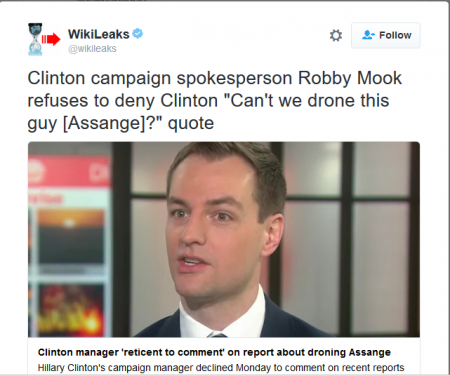 RightSide Broadcasting will be providing live streaming of the Berlin conference.