Roger Stone on Alex Jones: Assange Has “All of the Emails” From Clinton’s Private Server

“I AM SURE THAT THE MOTHER LODE IS COMING WEDNESDAY” 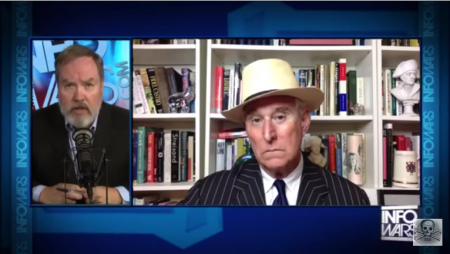 (Oct. 3, 2016) — On Sunday, political operative and Trump supporter Roger Stone was a guest on the second hour of the Alex Jones Show to discuss former president Bill Clinton’s serial “sexual assault” of women which Stone and many others say Democrat presidential nominee Hillary Clinton has facilitated over several decades.

Stone’s interview, conducted by video link with host David Knight, begins at 4:30 in the broadcast of the second hour.

Stone is vehemently opposed to Hillary Clinton becoming president and is marketing apparel at one of his websites with both Bill and Hillary’s likenesses on the front.

Stone quoted former NBC reporter Michael Isikoff as having reported that Bill Clinton has been “violent” toward women.  Bill Clinton’s infidelity reportedly began when he was Arkansas governor but possibly before, when he served as the state’s attorney general.

Hillary Clinton has made women’s issues a hallmark of her campaign.  Some have pointed out that the Clinton Foundation has accepted multiple millions from Middle Eastern countries which are particularly oppressive toward women and girls and that Hillary’s top aide, Huma Abedin, hails from a radical Islamic family.

Jones has offered incentives to anyone willing to wear one of Stone’s T-shirts and “show up” on television.  Stone and Knight discussed an individual who recently wore a T-shirt and successfully positioned himself within the camera’s reach during an edition of “Fox & Friends.”

At the 14-minute mark, Jones, who had the day off, called in to the show and acknowledged that the Wikileaks announcement planned for Tuesday from the balcony of the Ecuadorian embassy in London had been canceled.  However, he said that he was “honored” that the issue would be further discussed on his show.

Referring to a tweet issued by Stone early on Sunday, at 18:24, Knight asked Stone, “What’s going to happen on Wednesday that’s going to end the Hillary Clinton campaign?” to which Stone replied that Rep. Jerrold Nadler has called for an FBI investigation into an alleged communications relationship between Stone and Wikileaks’ founder, Julian Assange.

“It’s the new McCarthyism,” Stone said of Nadler’s proposal.  Of Assange, Stone said he is “a hero.” “He does not work for the Russians; there’s no evidence to the contrary…he is fighting the deep state; he has leaked documents equally embarrassing to the Bush regime…” Stone said.

Stone has written a book about the Clintons and another about the Bushes. At 20:50, Stone told Knight that the Bushes and Clintons are part of the same

Wikileaks is celebrating its tenth anniversary on Tuesday in Berlin.  Later on Sunday, NBC News producer Jesse Rodriguez tweeted that Assange would be making the announcement from the conference via video link, although most in the mainstream media did not report that development.

On Fox & Friends on Monday morning, Brian Kilmeade referred to Assange in derogatory terms and said that he is “rotting” in the Ecuadorian embassy, where he was given asylum five years ago after Sweden accused him of sexual assault.

Assange has denied the accusation.

At 19:43, Stone said that “an intermediary” with whom he and Assange are acquainted met with Assange in London which Stone said “assured” him that “the mother lode is coming Wednesday.”  Stone said he has “reason to believe” that the information to be released will be “devastating” and has resulted in Clinton’s campaign attempting to “soften the blow” that is reportedly coming.

At 20:30, Stone said he believes that Assange has “all of the emails” which Clinton and her aides believed were “destroyed” from Clinton’s private server.  “Bad news:  Wikileaks has them all,” Stone said. “Herein lies the criminality of the Clintons.”

At 23:24, Stone said that he “does not control Assange” and that Assange could alter his plan to make the announcement at any time.  However, Stone said that their “mutual friend” told him that “the mother lode is about to come, and it will be extraordinarily damning to the Clintons.”

Roger Stone on Alex Jones: Assange Has “All of the Emails” From Clinton’s Private Server added on Monday, October 3, 2016