WHILE FBI DIRECTOR TESTIFIES TO CONGRESS 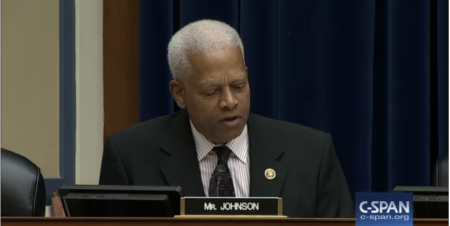 (Sep. 28, 2016) — At 10:37 a.m. EDT, Rep. Hank Johnson used the beginning of his allotted time to question FBI Director James B. Comey to criticize Republican presidential nominee Donald Trump for his “investigation” of Barack Obama’s “birth certificate.”  “The American people are sick of it,” Johnson asserted.

Johnson said that nothing came of Trump’s alleged “five years” of asking questions about Obama’s birth certificate, although after several months, the White House released what it said was a PDF of a certified copy of Obama’s original birth record from Hawaii.

Unsurprisingly, Johnson did not acknowledge that a criminal investigation spanning “five years” found after approximately six months that the long-form birth certificate image posted on the White House website on April 27, 2011 is a “computer-generated forgery.”

The mainstream media has also ignored those conclusions, announced in two press conferences in 2012.  The investigation was commissioned by Maricopa County Sheriff Joseph Arpaio, who said at a Tea Party meeting last week that the investigation remains ongoing.

Johnson additionally said that Republicans’ focusing on Hillary Clinton’s private email server has been a waste of time and turned to questioning Comey about whether or not the FBI is seeking ways to prevent hacking from Russia and other foreign operatives aimed at disrupting the upcoming U.S. election.

The hearing, broadcast live by C-Span but which can be watched in full by podcast, focuses on immunity agreements provided to Hillary Clinton’s aides while the FBI was allegedly investigating Clinton’s use of a non-government, unsecured server to conduct official business while she was Secretary of State.

Clinton deleted thousands of government-related emails, many of which have been ruled by the courts to be released to Judicial Watch, which filed several lawsuits after the news of Clinton’s use of a private server was broken by The New York Times in March of last year.

Prior to Johnson’s questioning, Rep. Steve King of Iowa expressed surprise at Comey’s disclosure that the U.S. Department of Justice had its own attorneys sitting in during the FBI’s interview of Clinton on July 2.  Three days later, Comey announced that the FBI would not recommend Clinton’s indictment for sending classified information on her unsecured server.

The DOJ followed the recommendation and did not prosecute Clinton.

Following Johnson, Rep. Louis Gohmert implied to Comey that the FBI’s investigation was not conducted in a competent manner.  Generally, Democrats asked about items other than the Clinton email server investigation, while Republicans were highly critical of it.