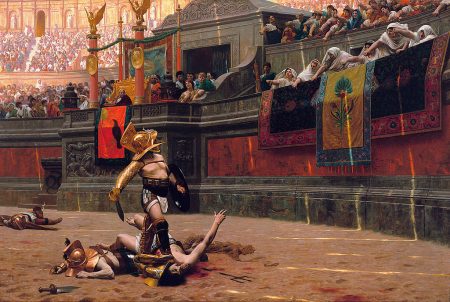 (Sep. 21, 2016) — I could go back to President George H.W. Bush’s New World Order-UN speech to identify its beginnings in modern times.  He told us that we were going to be taken over by it and assured us–strongly–that it would be a successful takeover.  I heard his speech when he was giving it…live…and remember feeling cold chills running down my back and a sense of strongly impending malevolence as I heard his words.   I knew, then, that something had changed in the world and that this change was going to be to the extreme detriment of humanity.

Since just before the election of Barack Hussein Obama that chillingly evil force had already become increasingly palpable and could almost be seen manifesting.  When Hillary Clinton joined him as his S.O.S. (appropriate initials) it became even worse and metastasized.  We have been overtaken by those who would prefer a world rife with marked created hierarchical distinctions and a decidedly working and impoverished lower class who can be easily manipulated by the “elite” political masters’ will via an unflinching iron fist.

Thus far, the coup in our country has been relatively bloodless. ..that is, unless we take into account the myriad US soldiers sent out to fight and die for the protection of our enemies—and, ultimately, as blood sacrifices to the satanic Islamic god—those US citizens murdered in Benghazi and other countries due to either the inattention or malevolent plan of the Obama-Clinton cartel and those who were actually injured or died during the now myriad false flag events meant to keep us in a state of chaos so that we don’t see who’s really behind the curtain.  I’ve been writing about the elites’ planned ascendancy of a North American Islamic Caliphate and its attendant Iron Curtain (which has now almost fallen in the former USA) for a number of years.  Now many other columnists are, also, writing about these same phenomena which are close to coming to fruition.

Amongst many others designed to destroy the USA as quickly as possible, Obama began the planning for the installation of Muslim Brotherhood members to the US government’s security almost as soon as he grabbed the title of POTUS.  Today, that infiltration is almost complete.

Our children are being taught Islamic “principles” in grade school and beyond.  Islamic terrorists in the USA have already been allowed to rape women and children with virtually no repercussions for their crimes.  Under the Obama-Clinton government, lawlessness has become the norm and the only ones considered “enemies of the State” by those in power were and still are those who want the US Constitution reinstalled as the foundational legal document of and for the United States of America.

Dictatorships and Oligarchies begin and are firmly installed when the people refuse to believe their eyes and ears and stop using their minds.  These tyrannical governments are, further, greatly aided by those who drag their feet and abnegate any responsibility for their own lives and their country’s government.  If We-the-People have decided that it’s too difficult or too much work to become involved in self-government and self-rule, we have already ended our chances of survival.

Tyrannical governments begin when those governed become lazy…and laziness becomes the catalyst for the violent usurpers to take over.  Death, chaos, riots, round-ups and the final destruction of all the people have built and believed inevitably and irrevocably follow.   We now find ourselves on the cusp of all of these.  The only possible way out is to instill someone who has the will and fortitude to stop the madness into  the US presidency.  Hillary Clinton has already firmly said and indicated she will continue with the madness of business as usual.  Trump offers the only opportunity for change back into sanity.

We’re already close enough to see the end of our existence as a nation and a people.  As Donald J. Trump has said more than once about voting for him…”What have you got to lose?”  From my vantage point, there is nothing to lose and much to gain by allowing Mr. Trump to become President of the United States of America.  If we don’t elect him?  Think Hunger Games…or a great deal worse.  Even now, he’s doing the best job he can to help our country get back on track after it has been, purposefully, derailed for much too long.  This is our last chance to resurrect our country from the dark side back into the light.  Our country must return to the God of Abraham, Isaac and Jacob.  If we still refuse…we condemn ourselves to an omnipresent and ever enveloping darkness.  This is it, folks.

“To open their eyes and turn them from darkness to light, and from the power of Satan to God, so that they may receive forgiveness of sins and a place among those who are sanctified by faith in me”–Acts 26:18

Dictator-in-chief Obama and US Congress collaborating to destroy USA?

Rape of our children and women by Muslim Men

City Officials attack victim’s family and cover up for Muslims

The End Stage of World Takeover By Clear and Present Evil added on Wednesday, September 21, 2016