IS “IMPRESSION” MORE IMPORTANT THAN TRUTH?

(Sep. 20, 2016) — Since the first week of May, The Post & Email has been reporting on what has been described as abnormal and dangerous conditions at the Trousdale Turner Correctional Complex (TTCC) in Hartsville, TN.

The new prison opened on January 6 of this year to what has been said to be severe short-staffing resulting in inmate deaths; control of the prison ceded to gang members; a lack of hot and timely meals; frequent, if not virtually continuous, lockdowns in which low-security inmates are confined to their cells for up to 23 hours a day; and a resultant lack of customary recreation time and employment opportunities which most inmates lost when they were moved to TTCC.

Inconsistent medication administration has also been reported by numerous inmates and their relatives who visit regularly.  According to a number of inmates who have filed grievances, their concerns are never addressed amid what is perceived to be a lack of concern on the part of corrections staff and management.

Because staffing has reportedly always been dangerously low and employee turnover hi, CCA has resorted to using a private security company whose employees act as correction officers.

TTCC is owned and operated by Corrections Corporation of America (CCA), private, for-profit company.  CCA has not been willing to provide comment to this publication.

Last month, The Post & Email was able to speak with Tennessee Department of Correction (TDOC) Communications Director Neysa Taylor about the many complaints emanating from TTCC.  We have previously sent Taylor documentation, media inquiries, and reports received from inmates and visitors pertaining to other Tennessee prisons.  Without knowing the specifics of the complaints relative to TTCC, Taylor dismissed our statements based on the reports as “inaccurate.”

She said that the TDOC is “very open” to hearing concerns from relatives, but The Post & Email has found that most relatives fear retaliation against themselves and their loved one in prison.

As a follow-up to our conversation with Taylor, The Post & Email sent her an email containing links to articles published not only by us, but also by mainstream media outlets reporting similar circumstances in various Tennessee prisons.  We requested Taylor’s comment on those contentions but received no response.

The TDOC website states that “The Communications Division supports the agency’s mission by using various media methods to increase communication with all stakeholders so they gain a greater understanding and positive impression of TDOC.”

On May 24, the Associated Press produced a widely-disseminated report specifically about TTCC which claimed that admissions to the facility had been halted earlier that month after a TDOC official cited it for deficiencies.  However, new inmates continue to arrive, as on Monday, The Post & Email received an email from a relative of an inmate with whose case we are acquainted stating that the inmate was very recently moved to Trousdale.

Approximately ten days ago, the relative of a different inmate told us that her loved one arrived to Trousdale in July.

Although owned and operated privately, Taylor informed us that a TDOC monitor is in place at TTCC “almost daily.”  CCA states on its website that it considers the TDOC a “longtime trusted partner” in housing the state’s growing inmate population.

For years, The Post & Email has highlighted the corrupt system used in Tennessee courts to indict citizens without due process which involves the hand-selection by judges of the county grand jury foreman.  The person so chosen therefore avoids vetting and serves for as long as the judge wishes in violation of the Fifth Amendment‘s provision for a grand jury to issue an unbiased assessment as to whether or not enough evidence exists to pursue a criminal charge against an accused.

The Post & Email has learned that in various Tennessee prisons, inmate deaths and injuries often go unreported to the public or are mischaracterized as having occurred from “natural causes” or as “illnesses,” respectively. Gang activity is common and has resulted in beatings and deaths of inmates and numerous injuries to correction officers.

Channel 4’s “I-Team” has found that “Gang members become cadets in state prisons” and that some inmates gain access to the internet, establishing Facebook pages and communication with other inmates while acquiring cash and drugs in prison.  At the time of the latter report in 2013, Tony Parker was TDOC Assistant Commissioner; he was named commissioner by Gov. Bill Haslam upon the departure of Derrick Schofield at the end of June.

Last February, the FBI announced that its Operation Ghost Guard netted several dozen arrests on indictments of smuggling drugs, cell phones and other contraband into nine of George’s 33 prisons in what was termed by the FBI as “staggering corruption.”  Why Georgia prisons were investigated but Tennessee’s prisons appear to be overlooked given the same reported violations is unknown.

In addition to the dozens of accounts already received, on Friday The Post & Email received a letter from an inmate not heard from before who provided a summary of the myriad complaints expressed by others over the last 4-5 months. 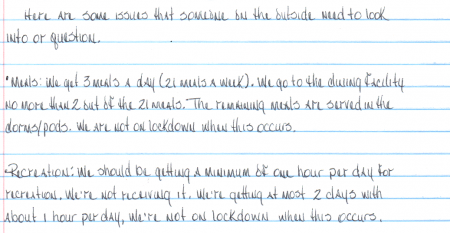 How Can So Many Corroborating First-Hand Accounts be “Inaccurate?” added on Tuesday, September 20, 2016