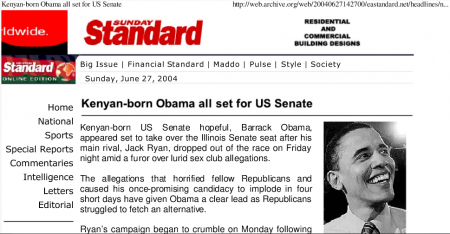 (Sep. 18, 2016) — Over at least the last three weeks, the mainstream media and the Clinton campaign have attempted to hammer Republican presidential nominee Donald Trump for failing to acknowledge that Obama was “born in the U.S.” a question which has existed since 2007 and before, when media reports surfaced stating otherwise.

In what could be a coordinated effort, “journalists” from all of the major news networks criticized Trump for his “birtherism” beginning in 2011 when Trump called upon the White House to release Obama’s “long-form” birth certificate to show he was born in the United States.

Noticeably, the media is most frequently now using the term “born in the U.S.” or “born in the United States,” rather than its earlier mantra of “born in Hawaii,” as Obama has claimed.

Trump was a leading voice for millions of Americans early in 2011 when he publicly called upon the White House to release Obama’s “long-form” birth certificate following reports that the short-form “Certification of Life Birth” posted on Obama’s 2008 campaign website, FighttheSmears; The Daily KOS; The St. Petersburg Times; Factcheck.org, Politifact.com and other outlets was fraudulent.

On April 27, 2011, the White House released what it said was a PDF of a certified copy of Obama’s original birth certificate obtained from the HDOH by special request, as the department claimed to have been issuing only computer-generated short-form birth certificates for several years prior, a claim proven false by several Hawaiians who were given a copy of their more detailed birth record upon request.

Directly after the publication of the image at whitehouse.gov, Trump held a press conference in New Hampshire at which he said he was “very proud of myself” (see video at bottom) that the document had been released at his urging.

Throughout his period of questioning, Trump did not focus on a theory or theories that Obama was born in one country or another, but rather, simply pressured the White House to release Obama’s detailed birth record.

After the release of the long-form image at whitehouse.gov, a number of experts went on the record to say that it was fraudulent. Subsequently, approximately 250 members of a local Tea Party group asked Maricopa County Sheriff Joseph M. Arpaio to launch an investigation to determine whether or not their votes would be disenfranchised in the upcoming 2012 presidential election given the reports of forgery.

Arpaio agreed and designated his Cold Case Posse to conduct a probe which, following approximately six months of investigation, announced at a press conference that the birth certificate image was, in fact, a “computer-generated forgery.”

At the same time, posse lead investigator Mike Zullo declared Obama’s purported Selective Service registration form to be a forgery.  Despite a second press conference on July 17, 2012 providing greater detail, neither Congress nor the mainstream media launched its own investigation to discover why or how a forgery had been posted on the White House website.

In late October 2012, just days before the presidential election, Trump challenged Obama to accept $5 million to go to a charity or charities of Obama’s choosing if Obama were to release his passport and college applications. When the White House did not respond to his offer, Trump increased it to $50 million, which also was met by silence.

While speaking at a gathering at the National Press Club at the end of May 2014, Trump was asked whether or not he regretted raising questions about Obama’s origins. Responding in the negative, Trump then expounded that he believed that one of two options as to Obama’s birthplace was true: that he either was born in Hawaii and misrepresented the fact by applying for college student aid designated for foreign students only; or that he was foreign-born and obtained financial aid from foreign sources truthfully and legitimately but later changed his life story to say he was born in Hawaii.

If the second possibility were to be accurate, in the minds of most Americans, Obama or anyone else similarly situated would be considered ineligible to serve as president given the “natural born Citizen” requirement in Article II, Section 1, clause 5 of the Constitution.  However, in 2016, the requirement appeared to be almost entirely disregarded when Canadian-born  Sen. Ted Cruz declared himself a candidate for President of the United States, claiming eligibility through his U.S.-born Citizen mother.

In 2000 and 2008, Arizona Sen. John McCain declared himself a candidate for the presidency. Although born in Panama, McCain’s case is viewed by some to be different than Cruz’s in that McCain’s parents were both U.S. citizens and his father serving as an admiral in the Navy at the time.

Obama’s claimed father was never a U.S. citizen, and his claimed mother, Stanley Ann Dunham, was reportedly 18 years old when she gave birth to him on August 4, 1961. Had the birth occurred in a foreign country, the law in place at the time would likely have precluded Dunham from passing her U.S. citizenship to her son.

Although Trump’s campaign had said on Thursday that Trump believed Obama to be American-born, The New York Times wrote of him:

He will also most likely face questions about the times that he continued to express doubt about the president’s birthplace, even after the release of the birth certificate.

In 2012, Mr. Trump suggested that the documentation that Mr. Obama provided might have been fraudulent, saying in a Twitter message that “an ‘extremely credible source’ has called my office and told me that @BarackObama’s birth certificate is a fraud.”

The Clinton campaign is unlikely to let Mr. Trump off the hook at a time when he clearly wants to change the subject.

On Friday, at the conclusion of a campaign event in Washington, DC during which a number of military veterans endorsed him, Trump declared, “President Obama was born in the United States. Period,” in an apparent attempt to silence the media cacophony and move on to other subjects for the remaining seven weeks of the campaign.

In widely-circulated articles beginning minutes after Trump’s anticipated announcement, The Washington Post and Associated Press reported that Trump had “falsely blamed Clinton for starting rumors” that Obama was born in Kenya.  However, by Friday evening, The Daily Caller and other websites had picked up on tweets issued by former McClatchy Washington bureau chief James Asher, who refuted Clinton’s claim that her 2008 presidential campaign had had no involvement with those rumors. 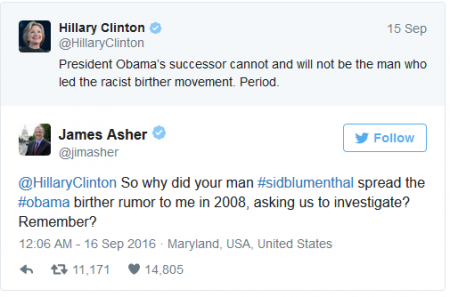 Asher’s reference was to Clinton confidant Sidney Blumenthal, who through an FBI investigation was found to have exchanged frequent emails with Clinton on her unprotected, private email server while she served as Secretary of State from 2009 to 2013.  Blumenthal was not in the employ of the federal government at the time but reportedly met with Clinton at State during her tenure.

NPR called Trump’s claim of Clinton’s involvement “baseless,” while Politico called it “discredited.”  Thus far, given Asher’s account of Blumenthal’s alleged face-to-face meeting with him in which Blumenthal urged Asher to investigate Kenya as Obama’s birthplace, those sites have not issued updates, corrections or new articles to reflect it.

As of this writing, Fox News, Newsbusters, McClatchy and others have written about Asher’s revelation without the AP, Washington Post or other “mainstream” news outlets joining them.

Blumenthal denied Asher’s claim.  Asher additionally said that at the time, he assigned a reporter to go to Kenya, who found that “the allegation was false.”

Media reports, anecdotal statements, and a changing life narrative over the years have contributed to doubts about Obama’s true history.  Examples include:

Why Blame Trump When Others Said it First? added on Sunday, September 18, 2016

11 Responses to "Why Blame Trump When Others Said it First?"