MAY HAVE BEEN CAUSED BY IMPROVISED EXPLOSIVE DEVICE (IED) 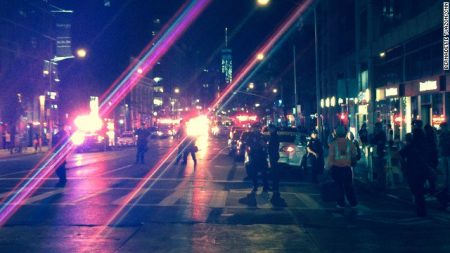 (Sep. 17, 2016) — Following the explosion of a pipe bomb in Seaside Park, NJ on Saturday during which no one was injured, an explosion in Manhattan has injured at least 26 people as of approximately 9:45 p.m. EDT, according to The New York Post.

The explosion occurred in the Chelsea section of Manhattan at about 8:30 p.m.

The location of the explosion is reported to have been the intersection of 23rd Street and 6th Avenue.

Cellphone video posted on Twitter under the hashtag #NYCExplosion was accompanied by citizen commentary that the streets in the area of 23rd Street and 7th Avenue are being evacuated.

The cause of the explosions has not been identified as of press time, although Fox News’s Eric Shawn reported at 10:00 p.m. that “terrorism” is a possibility.

An eyewitness interviewed by Fox said that the explosion shook the entire area, where she had debarked from a cross-town bus and entered a convenience store.  “It sounded like being at the fireworks…this was a big explosion…it seemed like a war to me,” she told the reporter, adding that she saw smoke “in the middle of the street.”

Blogger Mike Cernovich tweeted that a source within the FDNY said the explosion was caused by “a confirmed IED” (improvised explosive device).

A second eyewitness said the explosion “shook the building,” while The New York Post reported that it “blew out the windows of a 14-story residence for the blind.” 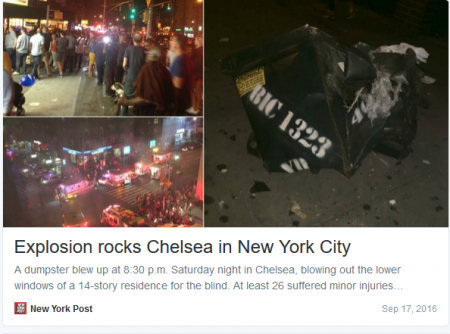