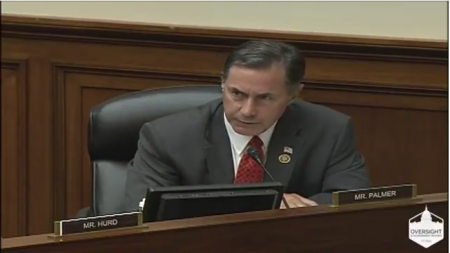 (Sep. 13, 2016) — Beginning at 10:00 a.m. EDT, the full U.S. House Oversight and Government Reform Committee questioned individuals involved in assembling the private computer server in Hillary Clinton’s basement used to transmit both personal and government-related emails, some of which were found to have contained classified information.

At 11:51 a.m., a “Mr. [Justin] Cooper” answered questions of various members of the committee, often referring to “Mr. Pagliano,” meaning Bryan Pagliano, the point person is the establishing of Clinton’s private server.

Cooper answered “yes” when Rep. Gary Palmer asked him if he had “been around the Clintons for a while.”  He admitted to “disposing of” a number of “devices” used by Hillary Clinton when she was Secretary of State.

Cooper confirmed to Palmer that there remains a “missing laptop.”

Regarding whether or not Clinton’s server was “hacked,” Cooper referred Rep. Mark Walker “to the FBI report,” meaning the two-part, 48-page report released by the FBI approximately ten days ago.  Rather than a “hack,” Cooper testified that he considered unusual activity on the server as “failed login attempts.”

Cooper said that he has “worked for the Clintons for 15 years,” including assisting former President Bill Clinton in writing his memoir and working for the Clinton Foundation.

“How did you get paid?” Walker asked, to which Cooper said he was paid with various payroll checks and not cash.

The committee chairman, Rep. Jason Chaffetz, has issued a subpoena to the FBI for an unredacted, complete report of its findings from its July 2 interview with Clinton, after which the law-enforcement agency declared that it was recommending against criminal prosecution of Clinton for mishandling classified information.

At 12:05 p.m., Cooper testified that he was aware that Clinton’s aide, Huma Abedin, had an email account on the private server in response to questioning from Rep. Steve Russell, who said that Abedin had denied knowledge of the private server until after Clinton resigned from her post in January 2013.

Rep. Grothmann asked Cooper for a list of employers between 1999, when Cooper first was an intern in the Clinton White House.  The following year, Cooper testified, he secured a permanent job in the federal government.

After several minutes in which she contended that the FBI had already reviewed the entire matter and concluded that nothing criminal happened, Maloney asked Cooper one question, which was whether or not Cooper saw anything inappropriate occurring while he worked for the Clintons and specifically, to set up Hillary Clinton’s private server.

Maloney appeared satisfied with Cooper’s response, as if it supported her own conclusions.

At 12:28 p.m., Cooper admitted to “rendering unusable” several of Clinton’s previous communication devices, which Rep. Carter referenced as “hitting them with a hammer.”

At 12:29 p.m., Chaffetz questioned Cooper, stating that 13 devices of Clinton’s were “missing.”

At 12:33 p.m., Cooper said he registered the domain name “clintonemail.com” on the day on which Clinton’s confirmation hearings for Secretary of State began in the Senate.

At 12:36, ranking committee member apologized to Cooper for having had to incur “legal bills” relating to his part in the Clinton server investigation by Congress.

At 12:37, Chaffetz called the committee into recess.