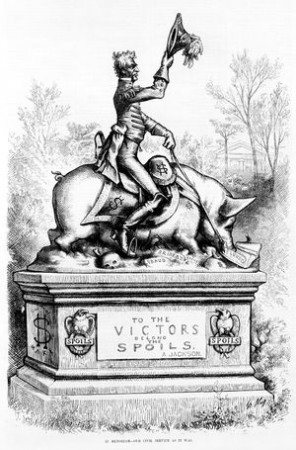 (Sep. 10, 2016) — Since 1828, our republic has been deviating farther and farther from the route planned for us by those 55 Courageous and Christian gentlemen known familiarly and fondly as our Founding Fathers. Within the context of what they had learned up until that time in their studies of Philosophy and Political Science, they incorporated that which would best serve their brand-new Federalist-based Republic. Their well-intentioned efforts would last a mere 41 years.

The egomaniacal Andrew Jackson was under the false impression that the previous election was “stolen” from him by the people supporting John Quincy Adams, our sixth president and the last Federalist. The manipulative and ego-driven eight years of the Jackson presidency saw the evolution of the “Spoils” System and the introduction of “Patronage,” which means to reward political supporters with high-paying, no- or little-work positions in the government.

Since that moment in our rather short history, we have been short-changed by those “Servants of the People” who, for the most part, are “takers” rather than “givers.”  Governmental public service was never intended to be or to become a lifetime occupation. In far too many instances it has become just that, when just the reverse was the intention of the Founders.

“From the outset, the American government was primarily seen as an indispensable means of establishing and promoting certain universally recognized public values, such as justice, tranquility, and liberty. And today, as citizens, we need to recognize in government what the founding fathers saw in it: that it is the only institution we can rely on to nourish and protect these kinds of values in our society.”
http://www.governmentisgood.com/articles.php?aid=12

The values noted above and the promulgation of rules to insure and enforce them are within the purview of the unelected officials of our government. These individuals may obtain their position as a result of thee “Spoils” System, perform very well and choose to remain a federal employee for many years, and retire on a reasonable earned pension available to members of the Civil Service.

Our chief concern is NOT the Civil Service; our concern is with the abuses orchestrated by and for the benefit of members of the political party with which the elected official is affiliated. As succinctly stated by New York Senator William Marcy, “Marcy used the phrase “‘to the victor belong the spoils,” from which the term spoils system is derived to refer to patronage political appointments”
https://en.wikipedia.org/wiki/William_L._Marcy#Quotes

The party system began as an argument among Alexander Hamilton, President Washington’s Secretary of the Treasury and a proponent of the National Bank (Federal Reserve); Thomas Jefferson, the Secretary of State; and James Madison, the latter two of whom were against a strong federal government, favored the agrarians and opposed the mercantilists.

Washington and Hamilton favored diplomatic relations with England, while Jefferson and Hamilton were favorable to diplomatic relations with France, then at war with England. The mere fact that these gentlemen even considered alignment with a political party is puzzling since all had previously voiced opposition to “factions” within a Government. Nevertheless, that had become the state of affairs in the Republic in the early 1800s, and we were already in decline.

The seventh administration of Andrew Jackson set the tenor of our political system for the next 188 years (1828-2016). A quick overview reveals a remarkably brilliant history in spite of political adversity. Foreign observers in various capacities have noted America’s exceptionalism as calculated by several national virtues, among them being a national kindness and Christian spirit of generosity. America is a nation of immigrants and has continued that notion throughout her existence. And, yes, the Native Americans who greeted the first Anglos as Christian explorer/adventurers or the Puritan Pilgrims were immigrants from Eastern Europe or Southwest Asia, the first of these having arrived about 15,000 years B.C.

We as Americans attempt to live by a code known as the Judeo-Christian Ethic or Ethos, but not in a liturgical or theological sense; rather, it is the sense of values by which we live. It has been called “The American Civil Religion” since our Constitution forbids the establishment of a national religion. It seems quite comfortable since the First Christians were Jews, disciples of Jesus Christ who, during His forty-day ministry after arising from the tomb, counseled them to spread the Gospel far and wide. KJV — “Matthew 28:19 – Go ye therefore, and teach all nations, baptizing them in the name of the Father, and of the Son, and of the Holy Ghost.”

It is worth noting here that politicians seem to have a propensity to abandon the one quality most desirable in a public servant: CHARACTER. Since there are some fifty synonyms for “character,” allow me to limit my meaning to moral or ethical quality. Far too many of our public servants are and have been philanderers and/or sexual predators. Seemingly all are given to lying, bribery, absenteeism, or some lesser crime or misdemeanor. Few are ever brought to trial and justice, and far too few are sanctioned for violations of the particular ethical code under which they purportedly serve.  The last four Congresses have been distinctly feckless and in constant disregard of their sworn oath of duty.

Before ending this dissertation, I would be derelict if I did not make note of a couple of items.

There are only 58 days before we vote to save our homeland from the forces of evil, and now that the race is down to two individuals, we MUST make the right choice. Should YOU decide on the Socialist/Democrat, we are in deep stuff! On the other hand, should you decide on a self-made billionaire, we stand a chance to: “MAKE AMERICA GREAT AGAIN.”

Hillary Rodham Clinton is another Socialist Democrat lacking even a tinge of CHARACTER.  She is an adulteress, a collaborative Traitor, a perjurer, a lesbian, according to the guy who reported it, one William Jefferson Clinton, better known as the hipster, Slick Willy; a disgusting female who had the temerity to call the mother of Sean Smith a liar and who had the unmitigated gall to remark at a congressional hearing on Benghazi, “At this point, what difference does it make?” Callous, crude, yes, and more.

Donald J. Trump is brusque, somewhat like Harry Truman; bright, honest, pragmatic, trustworthy and brilliant. He pays his own way, provides jobs and security for thousands, and he is obviously fearless. Those are all attributes I expect and admire in my President!

Continuing on the Detour or Getting Back to the Main Road? added on Saturday, September 10, 2016